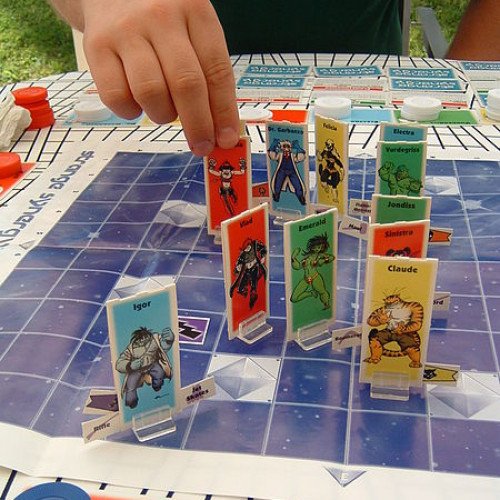 Strange Synergy is a card game published by Steve Jackson Games in which players build a team of super heroes to battle an opponent's team. The game supports up to four players. However, there are bases and flags for two more players. Each player receives a team of three "Super Heroes" cards that all share a base special power (such as accelerated movement or higher damage). Each player then receives nine power cards which they will distribute evenly amongst their team. There are three main ways to win the game: kill all opposing team members, stun/freeze (neutralize) all enemies for three turns in a row, or capture an opposing team's flag. 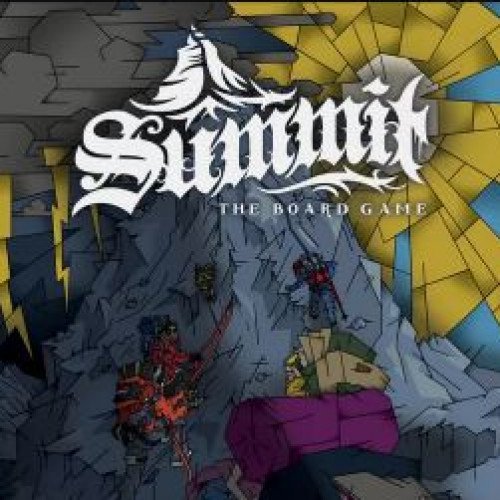 Summit is a Cold War board wargame introduced in 1961 by Milton Bradley as "The Top Level Game of Global Strategy", with an updated release in 1971. Each player chooses one of the major powers from the 1950s/1960s era and controlled their economic and military buildup during each turn, much like Risk. The board is an azimuthal projected map of the Earth looking down at the North Pole. Each of the six playable "countries" are different bright colors while unplayable regions are various shades of brown depending on their economic and military "value". The six countries and their colors are: United States (Blue), Soviet Union (Red), China (Yellow), India (Green), Western Europe (Purple), and South America (Orange), Each of the player countries are worth 10 points, while the brown regions vary from 2, 4, 6, and 8. For the board is a small circlet holder with colored flags to remind players which countries are in alliance. This piece is largely viewed as a gimmick, though various house rules may have different uses for these pieces. Each player may build, in their captured regions, a balance of factories, mills (both square), and military bases (round). Each player is awarded every turn a number of I-Beams, red Military Threat chips, white Popular Support chips, and black Economic Pressure chips. The I-Beams are produced by a player's Mills and are used to build more Factories, Bases, and Mills. Economic Pressure chips come from the amount of Mills a player owns. Popular Support chips come from the number of Factories one owns. Military Threat chips come from the number of Bases one has. There is also a set of cards with various situations that players must respond to. They can be as simple as gaining two I-Beams, to losing three red chips. The cards are similar to the community chest and chance cards of Monopoly.