"STAR WARS EPIC DUELS" vs "STARCRAFT: THE BOARD GAME" 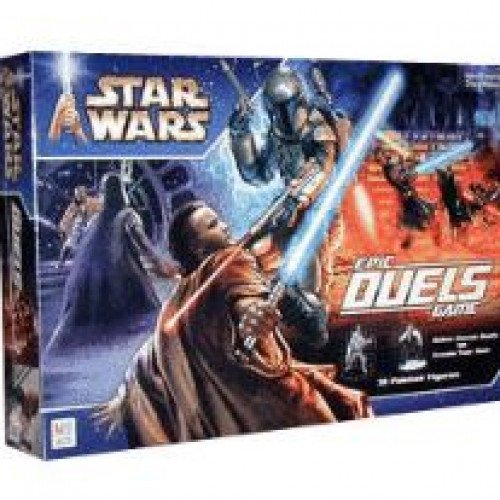 The Star Wars Epic Duels board game was released by Hasbro in 2002. It was designed for ages 8 and up, and for 2-6 players. The main designer of the game was Craig Van Ness, with assistance from Rob Daviau. It is out of print. There are 12 major characters in the game, and each major character is accompanied by one or two minor characters. The character combinations are: Anakin Skywalker with Padmé Amidala, Darth Maul with two Battle Droids, Obi-Wan Kenobi with two Clone Troopers, Yoda with two Clone Troopers, Luke Skywalker with Princess Leia, Mace Windu with two Clone Troopers, Darth Vader with two Stormtroopers, Count Dooku with two Super Battle Droids, Boba Fett with Greedo, Emperor Palpatine with two Royal Guards, Jango Fett with Zam Wesell, and Han Solo with Chewbacca. Game play is based on a card-centered combat system. Each set of characters has its own deck of 31 cards. There are three types of cards in the deck, Basic Combat Cards, Power Combat Cards and Special cards. Basic Combat cards have two values, one for attacking and one for defending. Power Combat cards have combat values and additional effects that give the characters special abilities. There are also "Special" cards that allow the characters to do unique things such as extra movement, drawing/discarding cards, and additional damage. Each player maintains a hand of cards from their respective decks that are used during the game. Each character card displays how much damage the major and minor characters can take before they are destroyed. Each character uses a wound marker to track the damage on their character card. The object of the game is to destroy all of your opponent's major characters. During gameplay players alternate turns rolling the die, moving their characters, and then performing 2 "actions". An action is defined in the rulebook as "Drawing a Card, Playing a Card, and Healing a Character." A character is healed by discarding a card of a destroyed major or minor character. There are several different ways to play the game from 1 vs 1, 2 vs 2, 3 vs 3, 3-6 player free-for-all, and even a special "masterplay" variant. Gameplay with 6-12 players is possible, however, it is more easily accomplished if two boards are used adjacent to each other. 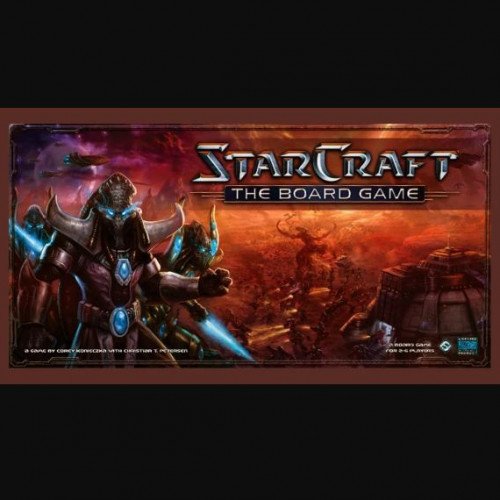 STARCRAFT: THE BOARD GAME

StarCraft: The Board Game, published by Fantasy Flight Games, is a game inspired by the 1998 computer game StarCraft. Players take control of the three distinctive races featured in the video games, the Terrans, the Protoss, or the Zerg, to engage in battle across multiple worlds in order to achieve victory. Each of the three races features a fairly different playing style. A prototype of the game was shown in BlizzCon 2007,[1] with pre-release copies sold at Gen Con 2007 and Penny Arcade Expo 2007. It was publicly released in October 2007. Up to six players may play StarCraft: The Board Game. Players take on the roles of one of two major factions of each of StarCraft's three races: the Terran Dominion led by Arcturus Mengsk, Raynor's Raiders led by Jim Raynor, the Protoss Conclave led by Aldaris, the Protoss loyal to Tassadar, the Zerg Overmind, or Sarah Kerrigan, Queen of Blades. Each of the six factions is unique in their starting equipment, and each faction has a unique victory objective, though the Terran factions are more alike with each other (the same with the other races). At the start of the game, each player claims two of the game's 12 planets as their "home planet" (a 13th planet, Typhon, was given away as a promotion in 2008), and players take turns to build the game board, representing the Koprulu sector, using the planets by linking them up. Each player may then use Z-axis connectors to connect distant planets on the game board to each other, mimicking a 3-dimensional environment, with the planets connected this way representing planets vertically aligned or in proximity. Each planet may have up to four territories, which may generate minerals, Vespene gas, or Conquest Points. At the start of the game, each player has a base on one of their own home planets, with a small detachment of forces at their disposal. Each turn consists of three phases: the Planning Phase, the Execution Phase, and the Regrouping Phase. In the Planning Phase, players take turns placing four of their Order tokens face-down on any planet where they have forces present (note, since the Orders are placed this way, the Orders placed latest are resolved first); these tokens are resolved in the Execution Phase. Game adjustments, including scoring, occur in the Regrouping Phase. There are three types of Orders that may be allocated: