"BETRAYAL AT HOUSE ON THE HILL" vs "CASTLE PANIC" 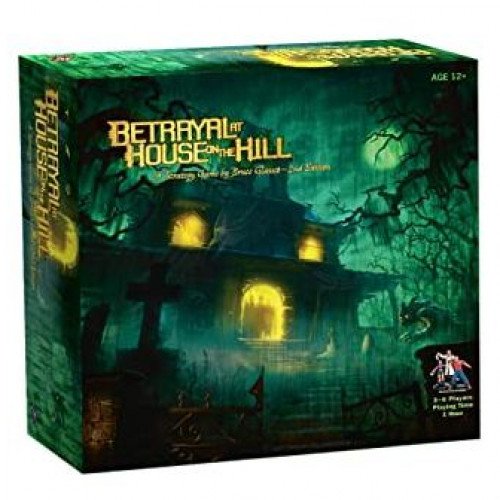 BETRAYAL AT HOUSE ON THE HILL

Betrayal at House on the Hill is a board game published by Avalon Hill in 2004, designed by Bruce Glassco and developed by Rob Daviau, Bill McQuillan, Mike Selinker, and Teeuwynn Woodruff. Players all begin as allies exploring a haunted house filled with dangers, traps, items, and omens. As players journey to new parts of the mansion, room tiles are chosen at random and placed on the game board; this means that the game is different each session. Eventually the "haunt" begins, with the nature and plot of this session's ghost story revealed; one player usually "betrays" the others and takes the side of the ghosts, monsters, or other enemies, while the remaining players collaborate to defeat them. Betrayal consists of a deck of room tiles (upper floor, ground floor, and basement); three sets of cards for Items, Events, and Omens; six different character plates, and a number of tokens to represent the players and various monsters or items. Each character plate has two possible characters that can be played though represented by the same token on the board; the characters have 4 attributes that are used to track the character's current Might, Speed, Knowledge, and Sanity values with marked starting positions for each. These are not linear; losing a point of Might, for example, may not alter the actual value of Might but still brings the player one step closer to death. The game also includes special dice which only have 0, 1, or 2 pips on each side. 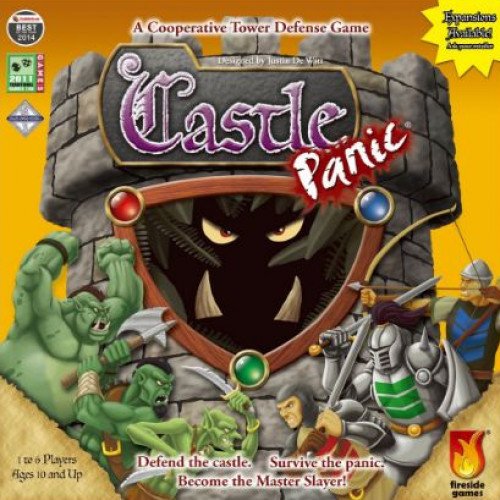 Castle Panic is a board game designed by Justin De Witt and published by Fireside Games in 2009. Castle Panic is tower defense strategy game in which players work cooperatively to protect a castle from monsters. The game was a nominee for the 2010 Golden Geek Best Family Board Game. The game is set up in a circle. The circle is divided into 6 arcs of 4 rings each. Each arc is assigned one of three colors; blue, red or green. Each ring of the circle is subdivided and labeled either forest, the outermost ring, moving inward with, archer, knight, and swordsman rings respectively. The objective of the game is to kill the monsters invading from the forest before they can destroy your castle. Each player has their turn in order trading, attacking, and potentially repairing their castle. After the players turns, monsters are added and move toward the castle. If they have already reached the edge of the walls or towers of the castles they will attack the obstacle in front of them. If all the towers are destroyed the monsters win and the players lose. Monsters are defeated by using cards from the current players hand to attack them. Each card attacks in its colored area and class location, e.g. a blue archer can only attack in the blue archer space. The exception to this rule is the hero who can attack in any ring of their color.