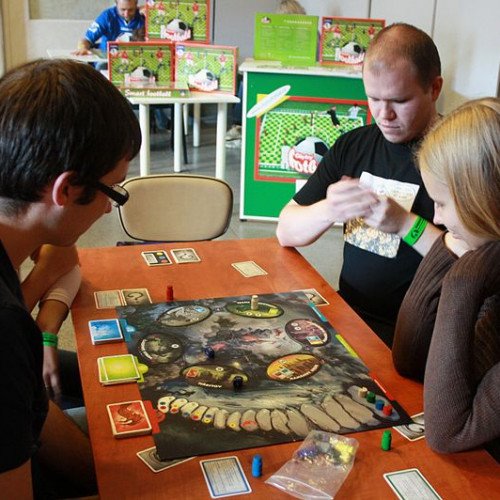 Shadow Hunters (シャドウハンターズ, shadō hantāzu) is a social deduction board game designed by Yasutaka Ikeda that was first published in 2005 by Game Republic in Japan. The game was published in the United States by Z-Man Games in 2008. The art style of the game closely resembles the style found in Japanese anime and manga. Players are secretly assigned the role of a character belonging to one of three factions: Shadows, which are supernatural creatures of the night, Hunters, which are humans attempting to exterminate the Shadows, and Neutrals, which are unaffiliated characters who are caught in the crossfire with individual victory conditions. Each player does not know the identity or allegiance of any other player, and must use cards, negotiation, and guesswork to figure out who everyone else is. The game ends when one or more players have fulfilled their victory conditions. At this point all players who have fulfilled their objectives are declared winners, whether they are part of the same faction or even alive. First, shuffle the six area cards and place them randomly on the designated spots on the game board. Next, shuffle the White, Black, and Hermit decks separately and place them face down on the marked area on the side of the board. Now each player must choose a color and place one piece in the No Damage circle on the board (the HP piece) and one piece in front of them for now (the Player piece). Shuffle the Shadow, Hunter, and Neutral character decks face down separately, and looking at the table below, pick out the appropriate number of cards from each deck, shuffle all of the selected character cards together, then hand out one card to each player, face down. Make sure that other players cannot see your character card when you receive it. Once you have your character card, read over it to see your affiliation, your special ability, and your victory condition. Finally, randomly determine the starting player and begin the game. 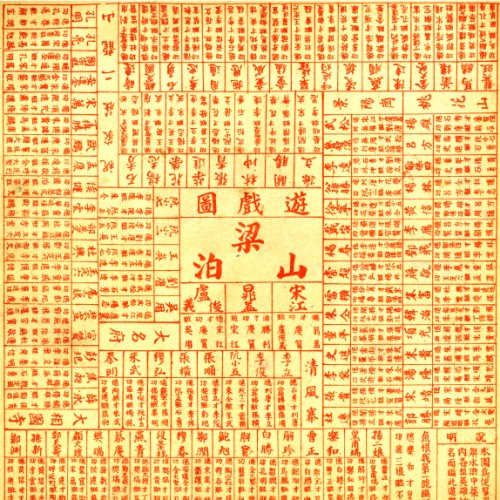 Shengguan Tu (simplified Chinese: 升官图; traditional Chinese: 陞官圖; pinyin: shēngguān tú), translated variously as Promoting Officials and Table of Bureaucratic Promotion, is an ancient Chinese board game that originated in the Tang dynasty, with the earliest historical record of a variant of it dating back to 836. Compared to Monopoly and snakes and ladders by contemporary commentators, the game has players take on the roles of mandarins; the objective of the game is to attain the highest possible bureaucratic position, whilst accumulating more prestige and monetary funds than other players. Historically a gambling game doubling as an educational tool for acquainting Chinese males with the bureaucratic hierarchy, it still enjoys relative popularity nowadays. The keju imperial examination system, which Shengguan Tu is based on, was first explicitly mandated upon Chinese students during the Sui dynasty. According to the Ministry of Education of the Republic of China (Taiwan), Shengguan Tu was first introduced during the Tang dynasty which immediately succeeded the Sui dynasty. In his Preface to Selecting a Bureau by Throwing Dice (838), Tang scholar Fang Qianli writes of his playing Caixuan Ge (Selecting a Bureau), "an ancestor to Shengguan Tu", while stranded on a boat with a few friends in 836. Beyond that, however, the "few" historical sources "dealing with (the game) are confused and tend to feed off each other". Twelfth-century writer Xu Du references the game in a short passage in Quesao Bian; subsequent historical sources, including the eighteenth-century Gaiyu Congkao by Zhao Yi, rely heavily on the information provided by Xu. However, Xu's account was based on others' verbal accounts, and the quotations of his passage are believed to have been corrupted, according to Carole Morgan in the Journal of the American Oriental Society. A more recent attempt by Cai Ce in 1968 to retrace the early history of Shengguan Tu is similarly "so flawed as to be practically useless". Tang government official Li He was the undisputed inventor of Caixuan Ge, the early incarnation of Shengguan Tu that Fang Qianli played; Li's game was improved upon and modified by subsequent officials, including Liu Gongfu, who is credited with creating the "version that has been transmitted to the world".