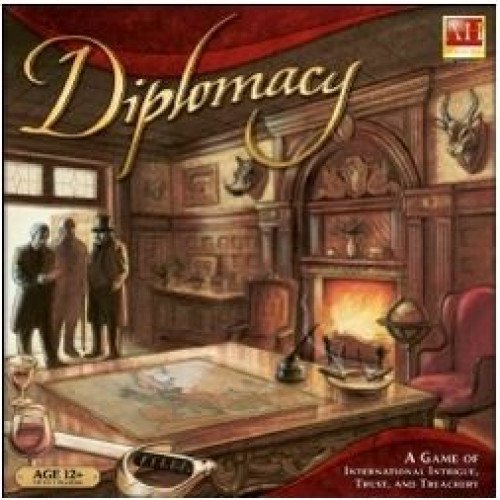 Diplomacy is an American strategic board game created by Allan B. Calhamer in 1954 and released commercially in the United States in 1959. Its main distinctions from most board wargames are its negotiation phases (players spend much of their time forming and betraying alliances with other players and forming beneficial strategies) and the absence of dice and other game elements that produce random effects. Set in Europe in the years leading to the Great War, Diplomacy is played by two to seven players, each controlling the armed forces of a major European power (or, with fewer players, multiple powers). Each player aims to move their few starting units and defeat those of others to win possession of a majority of strategic cities and provinces marked as "supply centers" on the map; these supply centers allow players who control them to produce more units. Following each round of player negotiations, each player can issue attack and support orders, which are then executed during the movement phase. A player takes control of a province when the number of provinces that are given orders to support the attacking province exceeds the number of provinces given orders to support the defending province. Diplomacy was the first commercially published game to be played by mail (PBM); only chess, which is in the public domain, saw significant postal play earlier. Diplomacy was also the first commercially published game to generate an active hobby scene with amateur fanzines; only science-fiction, fantasy and comics fandom saw fanzines earlier. Competitive face-to-face Diplomacy tournaments have been held since the 1970s. Play of Diplomacy by e-mail (PBEM) has been widespread since the late 1980s. Diplomacy has been published in the United States by Games Research, Avalon Hill, and Hasbro; the name is currently a registered trademark of Hasbro's Avalon Hill division. Diplomacy has also been licensed to various companies for publication in other countries. Diplomacy is also played on the Internet, adjudicated by a computer or a human gamemaster. In its catalog, Avalon Hill advertised Diplomacy as John F. Kennedy and Henry Kissinger's favorite game. Kissinger described it as his favorite in an interview published in a games magazine. American broadcast journalist Walter Cronkite is reported to have been a fan of the game. Michael Portillo, British journalist, broadcaster, and former Member of Parliament and cabinet minister, is known to have played the game while studying at Harrow County School for Boys. 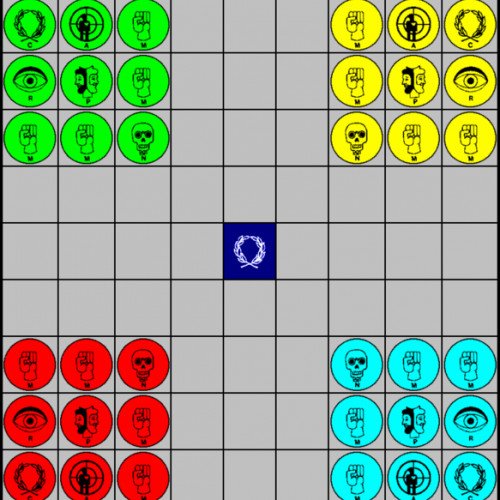 Djambi (also described as "Machiavelli's chessboard") is a board game and a chess variant for four players, invented by Jean Anesto in 1975. The rulebook in French describes the game, the pieces and the rules in a humorous and theatrical way, clearly stating that the game pieces are intended to represent all wrongdoings in politics. Material The game is played on a 9×9 board whose central square (called "the maze") is marked with a different color or a sign. Each player has nine pieces: Some killers 1 Chief 1 Assassin 1 Reporter 4 Militants . Some movers 1 Diplomat that moves living pieces. It is a very useful piece at the beginning of the game also called Agitator, or Troublemaker. 1 Necromobile that moves corpses. Important piece in end of game as dead pieces stay as corpse on the board in this game. The objective of the game is to get absolute power by being the last chief alive on board. Although informal alliances can be temporarily agreed upon, there is no team: each player plays against the other players. The pieces are placed in each corner of the board as shown in the picture above. Order of play is red - blue - yellow - green.