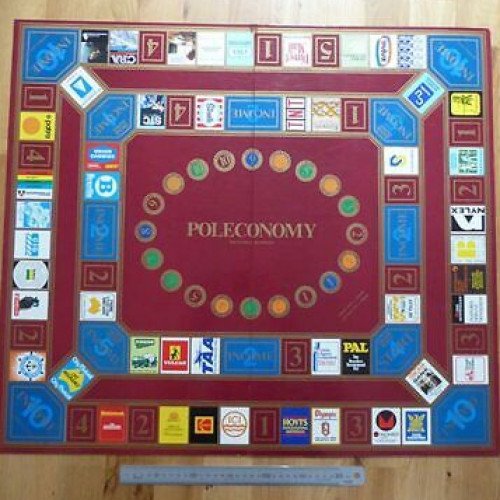 Poleconomy is a board game invented by New Zealander Bruce E. Hatherley and first published in 1980. It is similar to Monopoly but the board is divided into companies rather than properties. Players compete to acquire properties and investments through stylized economic and political activity. The playing time is set by agreement from all players, e.g. 2 hours, and the winner is determined by the monetary sum of all player cash, companies, insurance or other assets. The game can also end when there are no more companies, advertisements in the bank or bonds in the treasury. Another objective of the game is "to teach players some of the fundamentals of economics, and the ways in which the economy and the government interact." Different editions were published for several different countries. The name Poleconomy is a portmanteau of "politics" and "economy". Poleconomy was invented by Bruce Hatherley, a New Zealander from Christchurch who was living in Sydney at the time. He first filed a US patent claim for it in January 1981. It was published in 1980, first in an Australian edition, then a New Zealand edition. The New Zealand edition was produced by Tanner Couch and Robyn Larsen sold the squares on the board as advertising space to the actual companies represented. The New Zealand Stock Exchange was involved with the launch in Auckland. It was also published by World Games. Hatherley contacted Canadian think tank the Fraser Institute to help introduce the game to Canada in 1983. Michael Walker, an employee of the Institute, sold the first squares as advertising and the rest were sold by stockbrokers, who had little other work because of a recession at the time. More than a million dollars was raised by the Institute and Poleconomy was credited with helping the Institute survive the recession. It was later sold in South Africa and the United Kingdom in other localised versions. More than 1.5 million copies of Poleconomy have been sold internationally, incorporating the participation of 260 major corporate sponsors who leased advertising space in the separate national versions. US patent 4,522,407 was granted for the game in 1985. 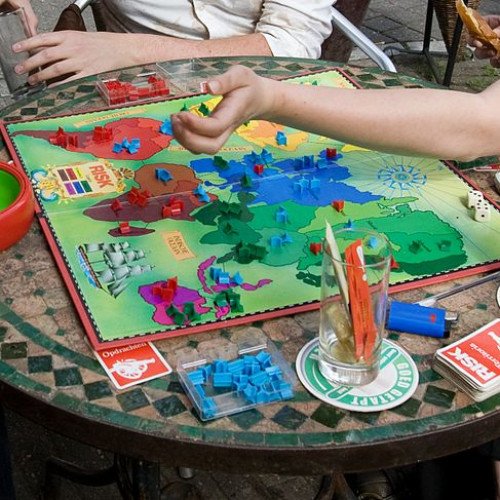 Risk is a strategy board game of diplomacy, conflict and conquest for two to six players. The standard version is played on a board depicting a political map of the world, divided into forty-two territories, which are grouped into six continents. Turns rotate among players who control armies of playing pieces with which they attempt to capture territories from other players, with results determined by dice rolls. Players may form and dissolve alliances during the course of the game. The goal of the game is to occupy every territory on the board and, in doing so, eliminate the other players. The game can be lengthy, requiring several hours to multiple days to finish. European versions are structured so that each player has a limited "secret mission" objective that shortens the game. Risk was invented in 1957 by Albert Lamorisse, a French filmmaker, and it became one of the most popular board games in history, inspiring other popular games such as Axis & Allies and Settlers of Catan. The simple rules but complex interactions make it appealing to adults as well as children and families. It is still in production by Hasbro with numerous editions and variants with popular media themes and different rules including PC software versions, video games, and mobile apps. Risk was invented by French film director Albert Lamorisse and originally released in 1957 as La Conquête du Monde (The Conquest of the World) in France. It was bought by Parker Brothers and released in 1959 with some modifications to the rules as Risk: The Continental Game, then as Risk: The Game of Global Domination. The first new version of Risk was released in 1986. Called Castle Risk, it featured a map depicting 18th century European castles instead of a map of the world, and it was a financial disappointment. In 1993, the rules for Secret Mission Risk, which had been the standard in Europe, were added to the United States edition. After a limited special-edition release in 1999, in France, called Risk: Édition Napoléon in commemoration of 200th anniversary of the Napoleonic era (1799-1815), a new edition called Risk: 2210 A.D. was published in 2001 by Hasbro's Avalon Hill division. The game was futuristic-themed, featuring moon territories, ocean territories and commander units and offered a number of expansions. Starting in 2002, Risk versions themed around media franchises such as Lord of the Rings, Star Wars, and Transformers were released, sometimes with as many as six editions per year. A collector's edition of classic Risk in a bookshelf-format wooden box was issued in 2005 as part of the Parker Brothers Vintage Game series, distributed through Target Stores. In 2008, Winning Moves, a Hasbro licensee, introduced 1959 Risk, a reproduction of the original Parker Brothers version with original artwork, wooden playing pieces and rules. Many themed versions are currently being published, and new themes continue to be introduced. In the first editions, the playing pieces were wooden cubes (one set each of black, blue, green, pink, red and yellow) representing one troop each and a few rounded triangular prisms representing ten troops each, but in later versions of the game these pieces were molded of plastic to reduce costs. In the 1980s, these were changed to pieces shaped into the Roman numerals I, III, V, and X. The 1993 edition introduced plastic infantry tokens (representing a single unit), cavalry (representing five units), and artillery (representing ten units). The 40th Anniversary Collector's Edition contained the same troop pieces but made of metal rather than plastic. In the 2005 "bookcase" edition, playing pieces are once again wooden cubes.