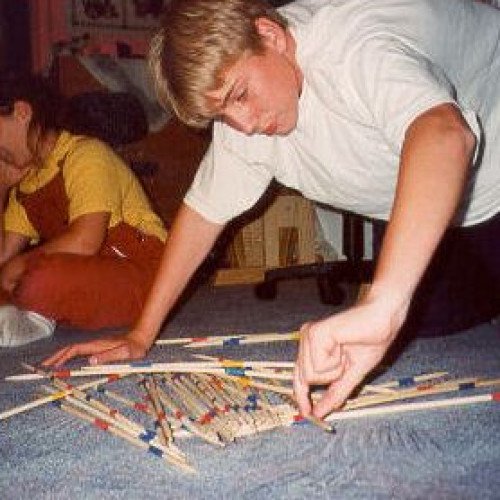 Mikado is a pick-up sticks game originating in Europe, played with a set of same-length sticks which can measure between 17 centimetres (6.7 in) and 20 centimetres (7.9 in). In 1936, it was brought from Hungary (where it was called Marokko) to the United States and named pick-up sticks. This term is not very specific in respect to existing stick game variations. The "Mikado" name may have been avoided because it was a brand name of a game producer. The game is named for the highest scoring (blue) stick "Mikado" (Emperor of Japan). The sticks are bundled and taken in one hand that touches the table or ground. The release creates a circular jumble. Now the players take turns, in which one stick after another should be taken up without moving or touching others. The take-away could be by hand, possibly through pressing on a stick's tip or if one has already picked up a special stick (Mikado/Mandarin), it could be used as a helper, possibly to throw up another stick. On a fault the turn ends (the last stick taken is not counted). The next player bundles and drops the sticks again. After several rounds, normally five, the one with the highest score – the total of the values of the sticks picked up – is the winner. A player is allowed to stand up on but not to leave their own place. A bad throw could be rerun and the rules should be kept strict in respect to moving sticks to enjoy the game. 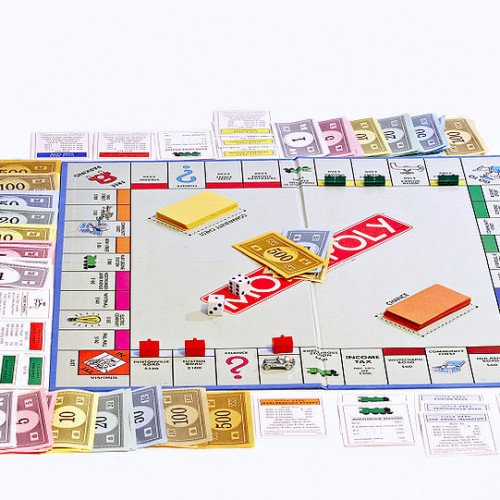 Monopoly is a board game currently published by Hasbro. In the game, players roll two six-sided dice to move around the game board, buying and trading properties, and developing them with houses and hotels. Players collect rent from their opponents, with the goal being to drive them into bankruptcy. Money can also be gained or lost through Chance and Community Chest cards, and tax squares; players can end up in jail, from which they cannot move until they have met one of several conditions. The game has numerous house rules, and hundreds of different editions exist, as well as many spin-offs and related media. Monopoly has become a part of international popular culture, having been licensed locally in more than 103 countries and printed in more than 37 languages. Monopoly is derived from The Landlord's Game created by Lizzie Magie in the United States in 1903 as a way to demonstrate that an economy that rewards wealth creation is better than one where monopolists work under few constraints,[1] and to promote the economic theories of Henry George—in particular his ideas about taxation.[3] The Landlord's Game had two sets of rules originally, one with taxation and another one mainly based on current rules. When Monopoly was first published by Parker Brothers in 1935, it did not include the less capitalistic taxation rule, which resulted in a more competitive game. Parker Brothers was eventually absorbed into Hasbro in 1991. The game is named after the economic concept of monopoly—the domination of a market by a single entity.