"CLUE JR.: CASE OF THE MISSING PET" vs "COPPIT" 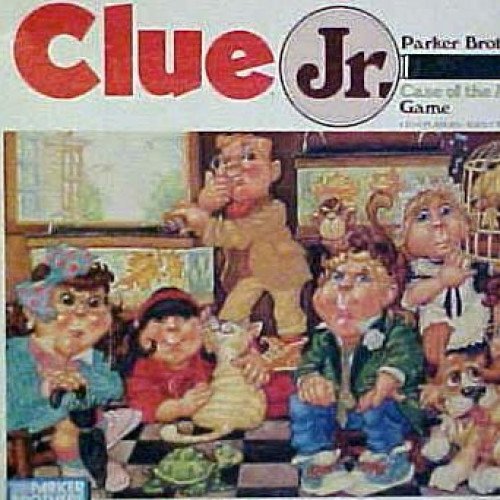 CLUE JR.: CASE OF THE MISSING PET, known as Clue in North America, is a murder mystery game for three to six players (Depending on editions) that was devised in 1943 by Anthony E. Pratt from Birmingham, England. The game was first manufactured by Waddingtons in the UK in 1949. Since then, it has been relaunched and updated several times, and it is currently owned and published by the American game and toy company Hasbro. The object of the game is to determine who murdered the game's victim, where the crime took place, and which weapon was used. Each player assumes the role of one of the six suspects and attempts to deduce the correct answer by strategically moving around a game board representing the rooms of a mansion and collecting clues about the circumstances of the murder from the other players. Numerous games, books, a film, television series, and a musical have been released as part of the Cluedo franchise. Several spinoffs have been released featuring various extra characters, weapons and rooms, or different game play. The original game is marketed as the "Classic Detective Game", and the various spinoffs are all distinguished by different slogans. In 2008, Cluedo: Discover the Secrets was created (with changes to board, gameplay and characters) as a modern spinoff, but it was criticised in the media and by fans of the original game. Cluedo: The Classic Mystery Game was then introduced in 2012, returning to Pratt's classic formula but also adding several variations. In 1944, Anthony E. Pratt, an English musician, applied for a patent of his invention of a murder/mystery-themed game, originally named Murder!  Shortly thereafter, Pratt and his wife, Elva Pratt (1913–1990), who had helped design the game, presented it to Waddingtons' executive Norman Watson, who immediately purchased it and provided its trademark name of Cluedo (a play on "clue" and Ludo, ludo being Latin for "I play" and a common British term for the game Parcheesi). Although the patent was granted in 1947, postwar shortages postponed the game's official United Kingdom launch until 1949. It was simultaneously licensed to Parker Brothers in the United States for publication, where it was renamed Clue. 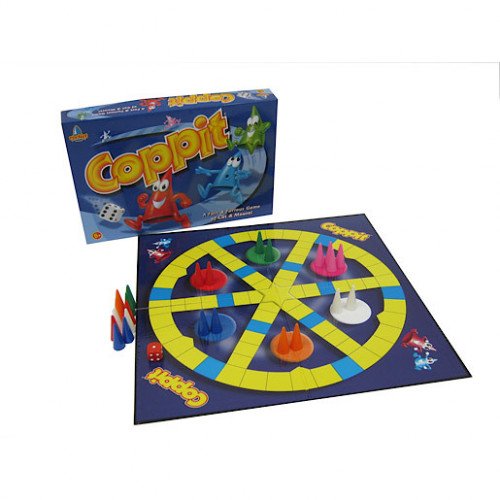 Coppit is a running-fight board game created in 1927 by Otto Maier Verlag which was originally called in German: Fang den Hut (or Capture The Hat in English). It was renamed and has been re-released several times, most notably by the Spear's Games company in 1964. It is a game for two to six players and is based partly on luck with a die and partly on strategy. It is similar to the game Ludo and is nominally a children's game. Each player has four conical, or hat-shaped, playing pieces all of the same colour that start off in their home 'base'. The object is to move out of your base, capture, or 'cop', your opponent's pieces by landing on top of them, carry them back to your base, and 'imprison' them there. A player can have any number of pieces out of their base at any time. However, while you are moving back to 'base' with a captured piece other players may in turn capture your piece. The winner is the last player to have an uncaptured piece. There are a few squares on the board that are of a different colour to the rest; if a piece is on these squares it cannot be captured.