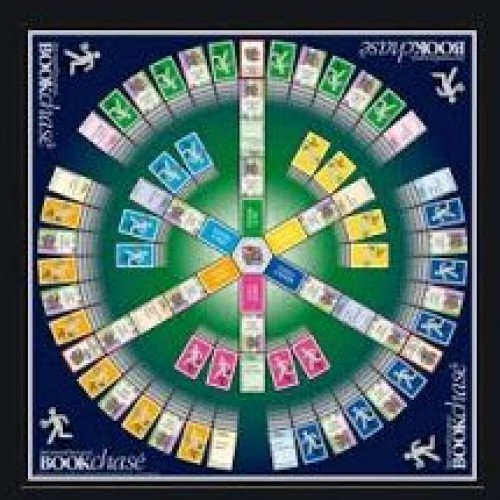 Bookchase is a board game published by Art Meets Matter. Players compete to acquire six small books for their bookshelf. They do this by partly by answering multiple-choice questions, partly by visiting special spaces on the board: The Bookshop, The Book Corner, The Library and also by chance events triggered by the turn of an Award or Sentence card. Each player takes turns moving round the board until one player has acquired six books: one of each of six categories. Once the player has a book shelf with six books they head for the centre space and if they arrive with book shelf intact they win. The board game was first launched and played at The Hay Festival of Literature in 2007. Each player is represented by a small coloured bookshelf. This is moved around the board according to the roll of two dice. Each bookshelf can accommodate up to six small books. Each book is colour-coded to represent a category of books: Sci-fi and Fantasy, Crime and Thrillers, Poetry and Plays, Children and Fun, Travel and Adventure, Classics and Modern. Items in the standard edition are: The board 6 different coloured bookshelves 36 books - six of each category colour A set of small labels (or Dust jackets) - optional for use on the small books 1200 multiple-choice question cards 42 Award & Sentence cards 2 dice Rules Each Player selects a Bookchase Shelf as their playing token and places it near the board centre. For example, the Yellow Shelf is placed on the Travel Adventure space (Yellow) near the centre, the Light Blue Shelf on Crime & Thrillers space (Light Blue) etc. The Bookchase Shelf is used to collect one of each of the six coloured books representing the different categories of Bookchase. Each Player rolls the dice and the highest scorer starts play. If two or more Players tie they roll again until the highest scorer is clear. Play runs clockwise. Each Player rolls in turn. First Player rolls the dice moving this number of spaces in any direction they choose. The idea is to visit each section of the board and claim a book by landing on a Bookchase Runner and answering a multiple-choice question correctly. A Player's turn must always use the exact number rolled. A Player may change direction at the start of each turn and at intersections or ‘dead-ends’ but no backtracking is allowed. As soon as a Player has a Bookchase Shelf with six books, one from each Category they must race for the centre space of the board. An exact number must be thrown to land on this space. Players need to be careful at this stage to avoid hazards. 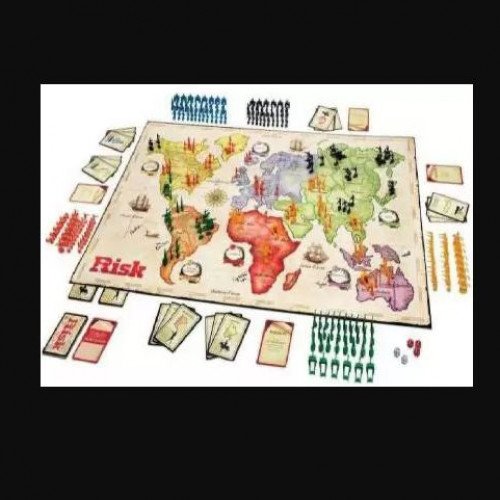 Castle Risk is a version of the board game Risk that is played on a map of Europe. It was first released as a stand-alone game by Parker Brothers in 1986 and later appeared on the reverse side of the board in an early 1990s version of the standard Risk game. The map is divided into six empires and three neutral areas. A player receives four troops per turn for each empire the player controls and six troops for controlling all the neutral areas. A common variation in play is to have each of the neutral regions worth two troops a turn. Empires: French Empire (Paris, Gascony, Netherlands, Brittany, Marseille, Burgundy) British Empire (London, Wales, Ireland, Yorkshire, Scotland) Russian Empire (Saint Petersburg, Moscow, Livonia, Smolensk, Ukraine, Poland) German Empire (Prussia, Berlin, Saxony, Rhine, Bavaria) Ottoman Empire (Turkey, Montenegro, Serbia, Romania, Bulgaria, Greece) Austrian Empire (Trieste, Galicia, Vienna, Bohemia, Hungary) Neutral territories: Italy (Switzerland, Venice, Rome, Naples) Spain (Barcelona, Madrid, Portugal) Scandinavia (Sweden, Norway, Denmark, Finland) The rules of Castle Risk differ from original Risk in several respects. Each empire has a capital city (of the player's choosing) and once the capital is lost that player is out of the game. In addition, reinforcements are granted at the end of a turn instead of at the beginning (except in the case of the Reinforcements card). This makes fortifying the territory a player has just conquered much easier, but denies that player the opportunity to place the new troops in the best strategic position for the turn about to begin. Castle Risk introduces specific person cards. The cards allow players to modify dice rolls (General and Marshall), to attack by sea instead of land (Admiral), place extra armies at the start of a turn (Reinforcements), force temporary non-aggression pacts (Diplomats), or to look at another player's cards, discarding one in the process (Spy). Another new rule is the addition of "hidden armies", which are reinforcements that a player hides in a location of their choosing at the beginning of the game. They can be in any location, including an opponent's territory (except their own or an opponent's capital), which makes them very useful for launching a surprise attack. Hidden armies can only be withdrawn at the beginning of a players' turn and the player must have control of the territory at the start of their turn. Their power, when revealed, is based on the number of reinforcements cards that have already been played.