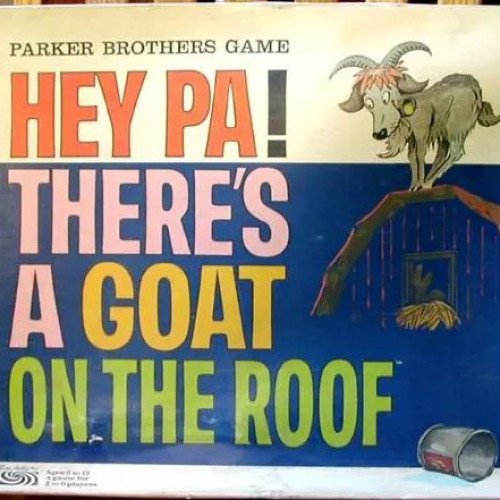 HEY PA! THERE'S A GOAT ON THE ROOF

Hey Pa! There's a Goat on the Roof was a children's board game issued by Parker Brothers in 1966. The main objective to the overall game is to get more cans than any other player. The player with the most cans win the game. The game revolves around a game board featuring plastic farm-related items sticking out of it. Each player selects a goat as his/her playing piece placing the pieces along the goat pen on the board. Players move goat-shaped pieces around the board attempting to complete tasks that reward them with tin can pieces. The first player to move their goat onto the roof of the barn ends the game, and at that time whatever player has the most cans wins. Movement is determined by an included spinner which make the game purely on luck. 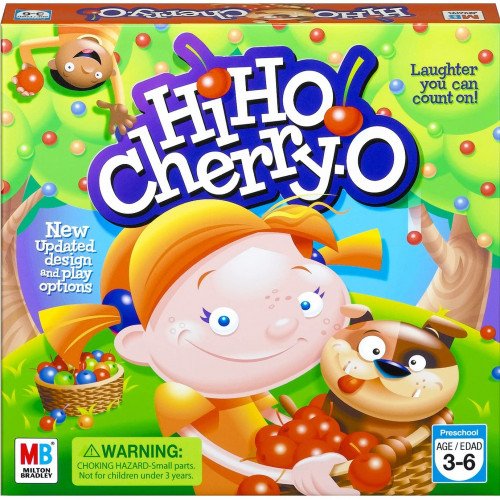 Hi Ho! Cherry-O is a children's put and take board game currently published by Hasbro in which two to four players spin a spinner in an attempt to collect cherries. The original edition, designed by Hermann Wernhard and first published in 1960 by Whitman Publishers, had players compete to collect 10 cherries. During an update in 2007, the rules were updated to include a cooperative play variant, where players cooperate to remove all fruit from the board before a bird puzzle is completed. In 2015, Winning Moves Games USA published a classic edition. Each player starts the game with an empty basket and 10 cherries on their tree. Players take turns spinning the spinner and performing the indicated action. The spinner is divided into seven sections: Take one cherry off of the tree Take two cherries off of the tree Take three cherries off of the tree Take four cherries off of the tree Dog: Replace cherries on the tree: two if the player has at least that many, or one if they have only one. If the player's bucket is empty, this space has no effect. Bird: Same effect as the dog Spilled basket: Return all cherries to the tree The first player to collect all the cherries from their tree and call "Hi Ho! Cherry-O" wins the game.