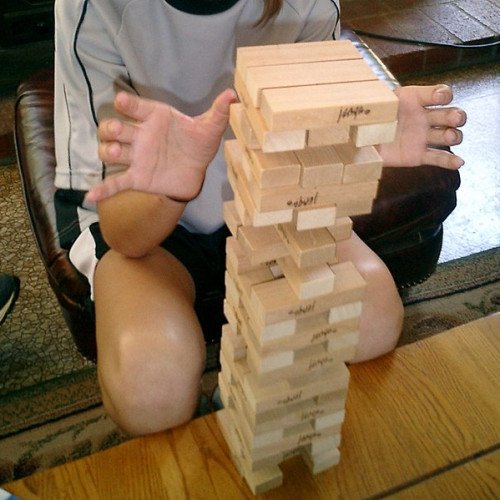 Jenga is a game of physical skill created by British board game designer and author Leslie Scott, and currently marketed by Hasbro. Players take turns removing one block at a time from a tower constructed of 54 blocks. Each block removed is then placed on top of the tower, creating a progressively more unstable structure. Jenga is played with 54 wooden blocks. Each block is three times as long as it is wide, and one fifth as thick as its length – 1.5 cm × 2.5 cm × 7.5 cm (0.59 in × 0.98 in × 2.95 in). Blocks have small, random variations from these dimensions so as to create imperfections in the stacking process and make the game more challenging. To set up the game, the included loading tray is used to stack the initial tower which has eighteen levels of three blocks placed adjacent to one another along their long side and at right angles to the previous level (so, for example, if the blocks in the first level lie lengthwise north–south, the second-level blocks will lie east–west). Once the tower is built, the person who built the tower gets the first move. Moving in Jenga consists of taking one, and only one, block from any level (except the one below the incomplete top level) of the tower, and placing it on the topmost level to complete it. Only one hand should be used at a time when taking blocks from the tower. Blocks may be bumped to find a loose block that will not disturb the rest of the tower. Any block that is moved out of place must be returned to its original location before another block is removed. The turn ends when the next person to move touches the tower or after ten seconds, whichever occurs first. The game ends when the tower falls, or if any piece falls from the tower other than the piece being knocked out to move to the top. The winner is the last person to remove and place a block successfully. 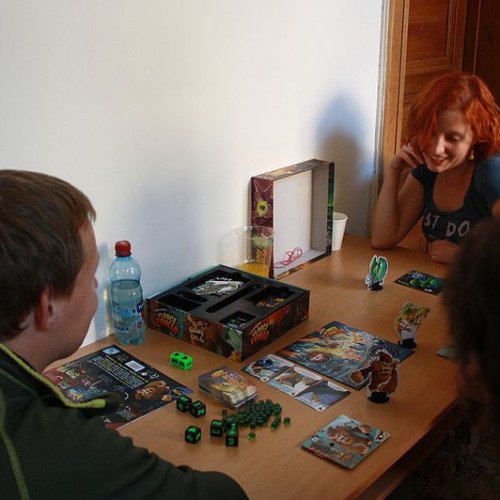 King of Tokyo is a tabletop game using custom dice, cards, and boards, designed by Richard Garfield and released in 2011. A New York City-based edition, King of New York, was published in 2014. A new version of the game was released in 2016, with all new artwork and characters, as well as mutant monsters, gigantic robots and other creatures. Players choose one of six monsters (Alienoid, Cyber Bunny, Giga Zaur, Kraken, Meka Dragon, and The King; in the second edition Cyber Bunny and Kraken are replaced by Cyber Kitty and Space Penguin) which comes with a scoring board. The winner is the first player to reach 20 points, or the only player to have any health. Players throw 6 dice, and may reroll some of them as in the dice game Yahtzee. Die faces are power, health, attack, 1, 2, and 3. With power dice, players collect power tokens to buy power cards with. With health dice, players outside Tokyo heal damage done to them. With attack dice, players outside Tokyo attack players in Tokyo, or players in Tokyo attack players outside. Three 1 dice score 1 point, three 2s score 2, and three 3s score 3. Any additional same-numbered die scores 1 additional point.