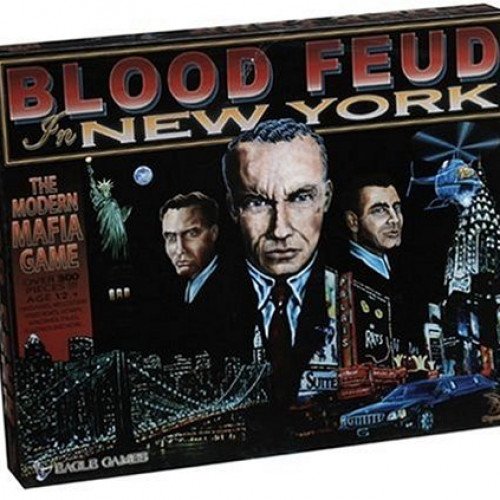 Blood Feud in New York is a board game. The game was designed by filmmaker Kyle Weinandy and published by Eagle Games in 2004. On a large map of New York City, including all the suburbs in Queens and Brooklyn, players build up their gangs of thugs, goons and hit men. The players move around the board city in limos, speedboats and helicopters to attack their enemies in order to take control of boroughs to earn income and hire more gangsters. Players can kill their enemy's boss and then control that gang or buy police protection and move around safely. When a player’s family members congregates in one borough, they are safe, but that earns the player no income bonuses. Put a family member in each borough and the player gets bonuses to income, but then they are vulnerable to attack. The game includes over 300 highly detailed miniatures, buildings, hit men, gangsters, limousines, speedboats and helicopters (with rotors that spin). The game board features an almost exact road map of New York and New Jersey. 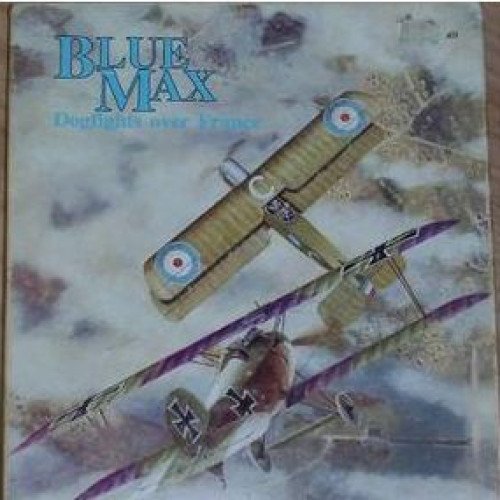 Blue Max is a multi-player board game of World War I aerial combat over the Western Front during 1917 and 1918. Each player is a fighter pilot of the British, French, American, or German air service. Each game is a single dogfight, in which players try to shoot down as many enemy planes as possible without being shot down themselves. There is no limit to the number of players in a single game. It was first published by Game Designers Workshop (GDW), in 1983. The game is named after the prestigious German order Pour le Mérite, informally known as Blue Max. Blue Max was designed by Phil Hall and originally released in 1983. A reprint of the boxed version was released in 1992. An updated miniatures version was released in 1995 that included early war aircraft designed by Alan Wright. The miniatures version did not include the aircraft counters or map of the boxed versions. Blue Max was selected as one of the best one hundred games by Games Magazine in 1993 and won the GAMA award for graphics in the same year. Canvas Eagles, an upgraded version of Blue Max, was designed by Eric Hotz and released free on the web. The game is played on an hexagonal board, using a maneuver chart from which, every turn, you decide which move your plane will do. After every player has decided their move, all the planes are moved simultaneously on the map. You can fire at another plane only if it is directly in front of your plane and at a maximum distance of 3 hexes. The rules are simple and most of them are contained in the components used during play; reference to the rule manual is rarely necessary. After playing some games, you can start to use the campaign rules which add another level of fun and challenge to the game.