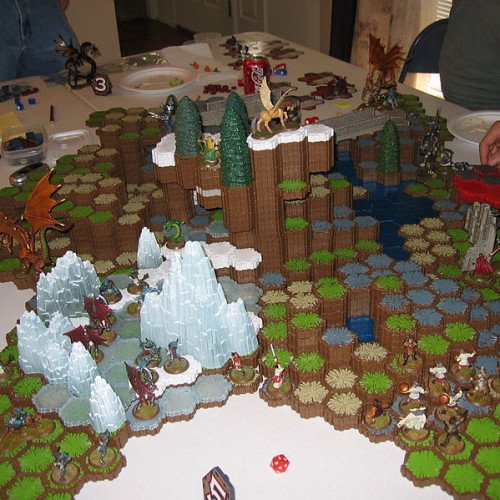 Heroscape (stylized as "heroScape" or "HeroScape") is an expandable turn-based miniature wargaming system originally manufactured by Milton Bradley Company, and later by Wizards of the Coast, both subsidiaries of Hasbro, Inc., and discontinued by Hasbro in November 2010. The game is played using pre-painted miniature figures on a board made from interlocking hexagonal tiles, allowing for the construction of a large variety of 3D playing boards. The game is often noted and lauded by fans for the relatively high production quality of the game materials, particularly the pre-painted miniature figures and the interchangeable and variable landscape system. Heroscape was released in 2004 by game designers Craig Van Ness, Rob Daviau, and Stephen Baker through Hasbro Games. This game was designed for 2 or more players, for ages 8 and older. It can be easily adapted for a large group of players, particularly if multiple master sets and expansion sets are used. The game comes with two sets of rules: the basic rules create a simpler and shorter game accessible to younger players, while the advanced rules are designed for a longer and more complicated game for older and more experienced players. Regardless of the game mode, each miniature figure or squad of figures has a corresponding card, called an army card, with basic game statistics printed on one side and advanced game information on the other. Basic game factors only include movement, range, attack, and defense, while the advanced game mode includes these factors, plus health, point value, species, class, personality, size, and special abilities. To play the game, a master set is required, which contains enough tiles to build a nearly limitless number of scenarios, but experienced players often combine sets to create larger and more elaborate playing surfaces. Over the course of Heroscape's production, four total master sets were released. The original, Rise of the Valkyrie, includes grass, rock, sand, and water tiles of various sizes, plus two ruins to diversify the playing surface. Various expansions and the other master sets add lava, snow, ice, swamp, road, concrete, and asphalt tiles, plus more ruins, trees, glaciers, jungle vegetation, a bridge system, and even a castle structure, complete with walls, turrets, and a gate. After the Heroscape brand was shifted away from Milton Bradley Company, Wizards of the Coast issued new Heroscape products with a Dungeons and Dragons theme, reflecting another of their product lines. This change was reported to be intended to reduce production costs, but existing players saw it as an attempt to convert players away from Heroscape to D&D. On November 3, 2010, Wizards of the Coast announced that they would be discontinuing production of Heroscape products, supposedly in favor of focusing on their core games Dungeons & Dragons and Magic: The Gathering. This caused an immediate backlash within the Heroscape community, including petitions and threats of boycotts. Despite the lack of official production for over a decade, the game remains popular, with a strong and dedicated community, regular tournaments, and additional user-created content. In 2015, Wizards of the Coast and Hasbro published Magic: The Gathering – Arena of the Planeswalkers, incorporating the rules and terrain based on Heroscape, but with the addition of spell cards, summoning, and select creatures and spells from the Magic: The Gathering universe, notably the planeswalkers. Two expansions were later released: Battle for Zendikar, which featured additional planeswalker figures, updates, and combinations; and Shadows Over Innistrad, which adds a battlefield obstacle called the cryptolith. Arena of the Planeswalkers is considered by many Heroscape fans to be the spiritual successor to Heroscape, and fans have devised a multitude of ways to combine the two games. 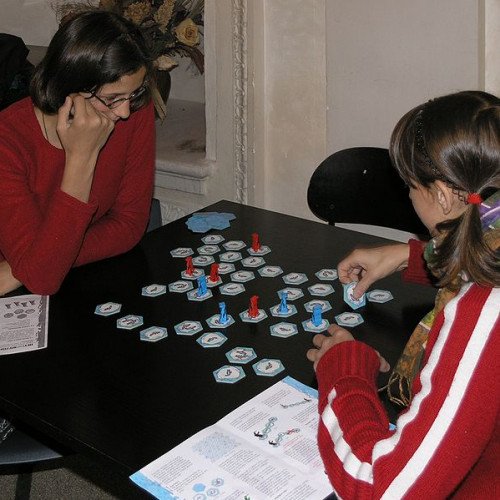 Hey, That's My Fish! is a 2003 board game designed by Günter Cornett and Alveydas Jakeliunas. The game is for two to four players. The game is about penguins trying to catch fish on the Antarctic. The game board is made of connected hexagons, each with one, two or three fish. After the game board has been built, each player chooses a colour and is assigned a number of penguins: four for a two-player game, three for a three-player game, or two for a four-player game. These penguins are then placed onto any vacant hexagon containing one fish. On each player's turn, the player moves one of his/her penguins in a straight line as far as he/she wishes, as long as there is a continuous line of vacant hexagons between the penguin's starting and destination hexagons. Penguins can't jump over empty space or other penguins. The hexagon that the penguin started from is then removed from play, becoming the player's property. A penguin that can't move anywhere is removed from play, along with the hexagon it is standing on. Also, any completely isolated areas that don't have any penguins on them are removed from play. When none of the penguins are in play any more, the game ends. The player who has collected the most fish from his/her hexagons wins.