"BETRAYAL AT HOUSE ON THE HILL" vs "BLOKUS" 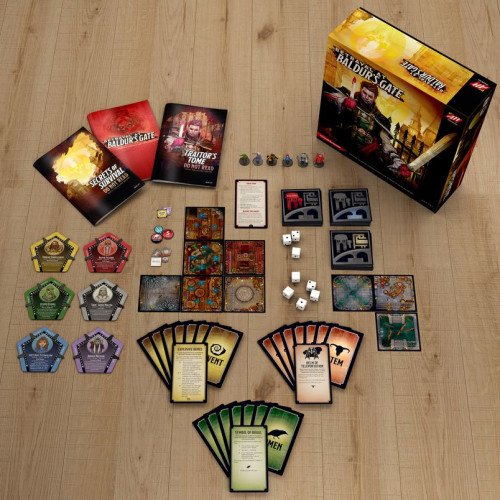 BETRAYAL AT HOUSE ON THE HILL

Betrayal at House on the Hill is a board game published by Avalon Hill in 2004, designed by Bruce Glassco and developed by Rob Daviau, Bill McQuillan, Mike Selinker, and Teeuwynn Woodruff. Players all begin as allies exploring a haunted house filled with dangers, traps, items, and omens. As players journey to new parts of the mansion, room tiles are chosen at random and placed on the game board; this means that the game is different each session. Eventually the "haunt" begins, with the nature and plot of this session's ghost story revealed; one player usually "betrays" the others and takes the side of the ghosts, monsters, or other enemies, while the remaining players collaborate to defeat them. Betrayal consists of a deck of room tiles (upper floor, ground floor, and basement); three sets of cards for Items, Events, and Omens; six different character plates, and a number of tokens to represent the players and various monsters or items. Each character plate has two possible characters that can be played though represented by the same token on the board; the characters have 4 attributes that are used to track the character's current Might, Speed, Knowledge, and Sanity values with marked starting positions for each. These are not linear; losing a point of Might, for example, may not alter the actual value of Might but still brings the player one step closer to death. The game also includes special dice which only have 0, 1, or 2 pips on each side. The game consists of two phases, the initial Exploration phase and the Haunt phase. At the start of the game, each player selects a character and sets the meters at the starting values. The "house" starts with a ground, upper, and basement floors placed on separate areas of the game table; the ground and upper floors are immediately connected by a staircase, whereas the basement remains unconnected until certain room tiles, event cards or other actions allow a connection. On each turn, the player can move through a number of rooms equivalent to their current Speed. If the player moves through a door where no room has been placed, they draw a room tile from the stack until they draw one that matches the current floor they are on. The tile is placed as best to match the current door layout of adjacent rooms. If there is an Event, Item, or Omen icon on the newly placed tile, the player draws the respective card and follows its instructions. Event cards often require the player to make a roll against one of their skills to avoid damage or gain benefits. Item cards provide equipment the player can use, drop, and trade with other players. Omen cards also generally provide items, but come at a price - after drawing an Omen card, the player must roll six dice, and if this roll is lower than the number of Omen cards that have been drawn, the Haunt phase starts. Unless otherwise specified, drawing a card and performing that action ends the player's turn. Otherwise, the player can continue to move through other rooms; icons for cards on existing rooms are ignored. Some room tiles have specific instructions that must be followed when moving through the room such as making a skill check to exit the room without taking damage. 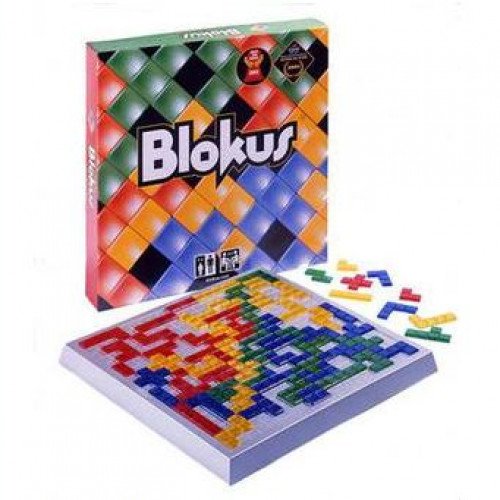 Blokus (/ˈblɒkəs/ BLOK-əs) is an abstract strategy board game for two to four players, where players try to score points by occupying most of the board with pieces of their colour. It was designed by French mathematician Bernard Tavitian and first released in 2000 by Sekkoïa, a French company. It has won several awards, including the Mensa Select award and the 2004 Teacher's Choice Award. In 2009, the game was sold to Mattel. The game is played on a square board divided into 20 rows and 20 columns, for a total of 400 squares. There are a total of 84 game tiles, organized into 21 shapes in each of four colors: blue, yellow, red and green. The 21 shapes are based on free polyominoes of one to five squares (one monomino, one domino, two trominoes/triominoes, five tetrominoes, and 12 pentominoes). The standard rules of play for all variations of the game are as follows: Order of play is based on the color of pieces: blue, yellow, red, green. The first piece played of each color is placed in one of the board's four corners. Each new piece played must be placed so that it touches at least one piece of the same color, with only corner-to-corner contact allowed—edges cannot touch. However, edge-to-edge contact is allowed when two pieces of different color are involved. When a player cannot place a piece, he or she passes, and play continues as normal. The game ends when no one can place any more piece. When a game ends, each player counts every square that he/she did NOT place on the board, each counting as a negative (-1) point (e.g. a tetromino is worth -4 points). The player with the highest score wins. A player who played all of his or her pieces is awarded a 15 point bonus. If the last piece played was a monomino, provided that he/she has played all pieces of his/her color, the player is awarded a 20 point bonus instead.