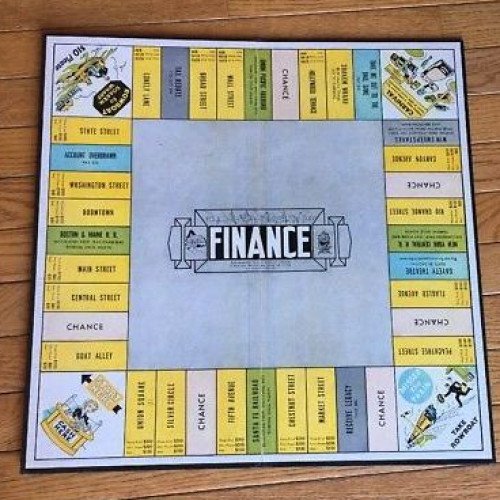 Finance, or The Fascinating Game of Finance or Finance and Fortune, is a board game originally released in 1932. The game is based on The Landlord's Game in the movement of pieces around the board, the use of cards, properties that can be purchased, and houses that can be erected on them. The game also has railroads; however, these may not be purchased. The game is a predecessor to Monopoly. The game begins with each player on "Cash Here" with $1925. Properties clockwise around the board begin with low value to high value purchase prices, with costs for additional houses and rents also increasing. Players move again on doubles, with no limit on numbers of doubles that may be thrown, and if a player lands on another player, the original player moves back five spaces, with the same effect as if the player had landed on that space originally. Players may trade properties or sell them back to the bank, but may not mortgage property. If a player is unable to pay, all their property is returned to the bank, and the player is out. The game continues until only one player is left. An alternate rule establishes a time limit and players total up their wealth. Finance was created by Dan Layman who played, with Louis, Louis and Fred Thun's version of the auction-monopoly games that had been spawned from The Landlord's Game at Williams College in Reading, PA. When the Thuns wanted to patent their game they found the Landlord's Game patent and only copyrighted their rule additions (additional railroads own double rent, Community Chest, paying $50 to get out of jail). With the Monopoly name and game then in the public domain, Layman decided to call the game Finance. With L. S. Ayres & Co. then Electronics Laboratories, Layman published the game for a year before selling it to Knapp Electric for $200. Initially, the game was sold in small black boxes (some of which came with poker chips for money) with four different versions of the rules. Otherwise, it was almost identical to Monopoly including Chance and Community Chest cards. 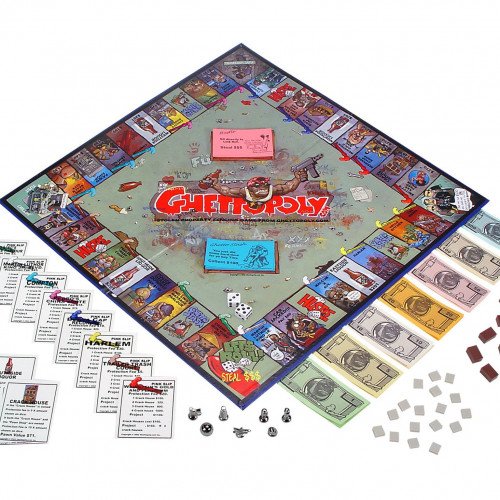 Ghettopoly is a parody of Monopoly released in 2002. Invented by David Chang, it uses Monopoly-like mechanics but is themed around a caricature of a black ghetto in the United States. The four railroad properties are replaced by liquor stores. Other properties include a massage parlor, a peep show and a pawn shop. The Community Chest and Chance squares become Ghetto Stash and Hustle squares, while taxation squares are replaced by police-shakedown and carjacking squares. Instead of building houses and hotels, property owners can build crack houses and projects. The seven game pieces include: a pimp, a ho, a 40 oz, a machine gun, a marijuana leaf, a crack rock, and a basketball. The game was criticised as offensively racist by a local chapter of the NAACP and by black clergy, among others. The game was pulled from the market by Urban Outfitters, just one of its many retailers. Chang still marketed the game without their support. According to Chang's website, which still sells the game, it is also available on Amazon. Redneckopoly is also available at ghettopoly.com. Further such games were planned, including Hoodopoly, Hiphopopoly, and Thugopoly. In October 2003, Hasbro sued David Chang over the game's similarities to Monopoly. In January 2006, Chang was found in contempt of court for failure to produce documents. The court thus entered a "default judgment" for Hasbro's continued use of "Monopoly" as a trademark, and dismissed Chang's counterclaims, which were to revoke trademark status on "Monopoly." In May 2006, the court estimated that Chang generated US$8,790,000 in profits from the sale of Ghettopoly, and that damages of $400,000 were reasonable as reflected in the court documents.