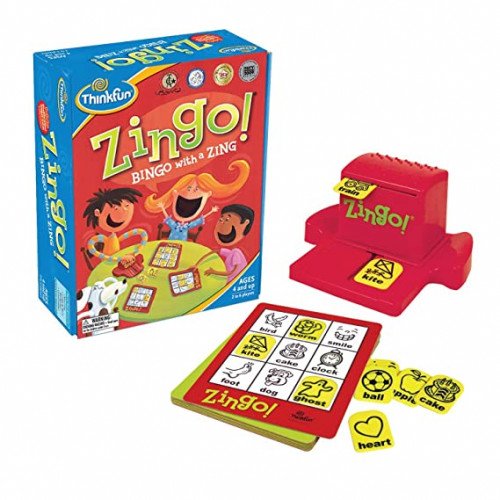 Zingo! is a game inspired by Bingo released by ThinkFun in 2002. Players try to fill their Zingo! cards with matching tiles from the Zingo! "Zinger". In the game, the dealer slides the Zinger to reveal two tiles at a time. When a player sees a tile that matches a picture on his/her board, he calls out the name of the object and places that tile on the matching space on their board. If two players have that tile, the person who calls out the name of the object first gets the tile. The first player to fill his card wins. The Zingo cards allow for more or less competitive play. The green sides have less images in common with the other 7 boards and are therefore more relaxed and less competitive. The green sides, however, have many of the same images and make for more intense games between players. 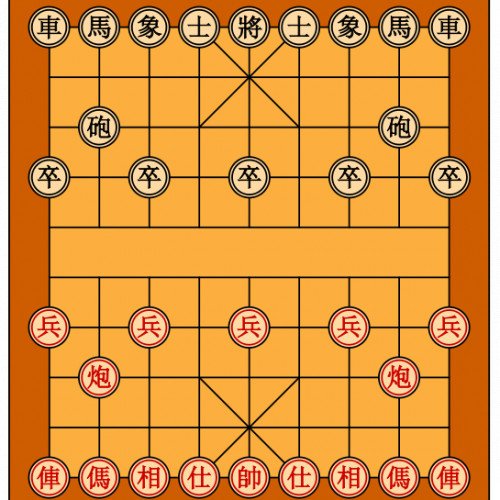 Xiangqi (Chinese: 象棋; pinyin: xiàngqí; Wade–Giles: Hsiang ch'i; English: /ˈʃɑːŋtʃi/), also called Chinese chess or Elephant chess, is a strategy board game for two players. It is one of the most popular board games in China, and is in the same family as Western chess, chaturanga, shogi, Indian chess and janggi. Besides China and areas with significant ethnic Chinese communities, xiangqi is also a popular pastime in Vietnam, where it is known as cờ tướng. The game represents a battle between two armies, with the object of capturing the enemy's general (king). Distinctive features of xiangqi include the cannon (pao), which must jump to capture; a rule prohibiting the generals from facing each other directly; areas on the board called the river and palace, which restrict the movement of some pieces (but enhance that of others); and placement of the pieces on the intersections of the board lines, rather than within the squares. Xiangqi is played on a board nine lines wide and ten lines long. As in the game Go (圍碁; or Wei ch'i 圍棋), the pieces are placed on the intersections, which are known as points. The vertical lines are known as files (Chinese: 路; pinyin: lù; "road"), and the horizontal lines are known as ranks (Chinese: 線/綫; pinyin: xiàn; "line"). Centred at the first to third and eighth to tenth ranks of the board are two zones, each three points by three points, demarcated by two diagonal lines connecting opposite corners and intersecting at the centre point. Each of these areas is known as 宮 About this soundgōng, a castle. Dividing the two opposing sides, between the fifth and sixth ranks, is 河 hé, the "river". The river is often marked with the phrases 楚河 About this soundchǔ hé, meaning "River of the Chu ", and 漢界 About this soundhàn jiè, meaning "Border of the Han", a reference to the Chu–Han War. Although the river (or Hanchu boundary) provides a visual division between the two sides, only two pieces are affected by its presence: soldiers have an enhanced move after crossing the river, and elephants cannot cross it. The starting points of the soldiers and cannons are usually, but not always, marked with small crosses.