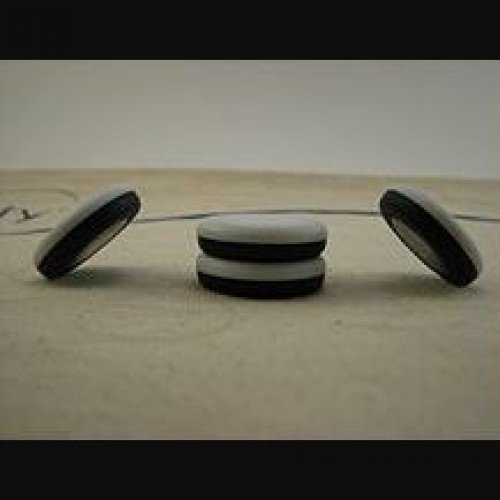 The purpose of the game is to gain points by forming towers of discs. The playing pieces are magnetic discs, with one side white and the other black, north and south respectively. They are identical with the exception of a neutral central disc which is coloured red. Play starts with one player tossing the central red disc in order to determine which player plays with which colour/magnetic polarity. Each player then lays 5 'foundation discs' of their colour starting with the white player. Each disc can be placed on the playing area with no limitation other than to be inside the external circle and not touching the red disc. Play then proceeds by placing further discs within the playing area, balanced, leaning, on the magnetic fields of preceding pieces. These pieces are known as 'leaners'. Moves which disrupt the pieces currently in play by making them fall or stick together are known as 'faults', and end a player's turn. If a fault results in two or more pieces touching each other, the opposing player then has an opportunity to capture those pieces by forming them into towers, which at the end of the game score points. Occasionally a player will intentionally fault, causing one of their own pieces to fall flat onto the play surface, thus making it easier to play further pieces. The play ends when one player has exhausted their supply of pieces or if a piece touches the center red disc. The winner of the game is determined by points scored, which are based on the number of pieces in towers of a player's color, and the pieces remaining in the opponent's hand. 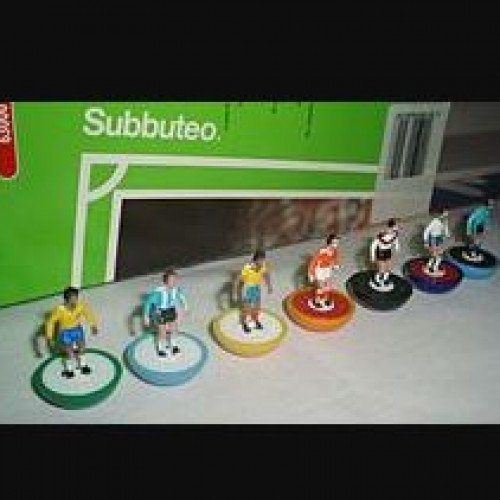 Subbuteo was invented by Peter Adolph (1916–1994), who was demobbed from the Royal Air Force after the end of World War II. Searching for a new business opportunity he turned his attention to creating a new table-top football game. He adapted his game from Newfooty, a table football game that had been invented in 1929 by William Lane Keeling of Liverpool. He made numerous improvements, including changing the heavy lead bases under the model players to lighter materials, using for his prototype a button from his mother's coat and a washer. In August 1946 Peter Adolph filed an outline patent application for the game, which was not finalised until May 1947. The August 1946 edition of The Boy's Own Paper first announced Subbuteo's availability and offered to send details, but sets were not available until March 1947. According to rumours, after the early adverts, orders started to pour in as Adolph set about converting his patent idea into a deliverable product. The first Subbuteo sets, known as the Assembly Outfits, consisted of goals made of wire with paper nets, a cellulose acetate ball, cardboard playing figures in two basic kits (red shirts with white shorts, and blue shirts with white shorts) and bases made from buttons weighed down with lead washers. The story is that Peter found one of his mother's coat buttons and used Woolworth buttons for the early set bases. No pitch was provided: instead, the purchaser was given instructions on how to mark out (with chalk, provided) a playing area on to a blanket (an old army blanket was recommended). The first sets were eventually available in March 1947, several months after the original advertisement appeared. The first figures were made of flat cardboard cut out of a long strip. Later these card players came in press-out strips before being replaced with two-dimensional celluloid figures, known to collectors as "flats".