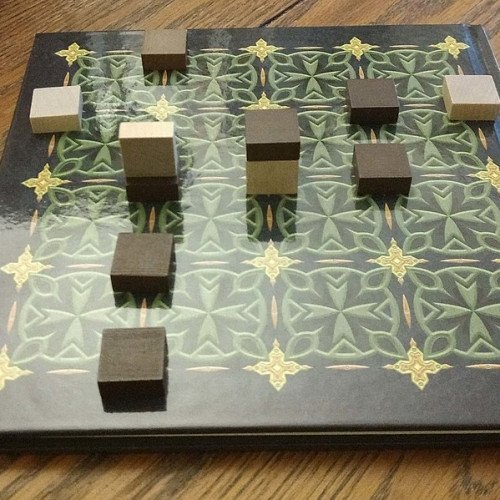 Tak is a two-player abstract strategy game designed by James Ernest and Patrick Rothfuss and published by Cheapass Games in 2016. The goal of Tak is to be the first to connect two opposite edges of the board with pieces called "stones", and create a road. To accomplish this, players take turns placing their own stones and building a road while blocking and capturing their opponent's stones to hinder their efforts at the same. A player "captures" a stone by stacking one of their pieces on top of the opponent's. These stacks can then be moved as a whole or broken up and moved across several spaces on the board. The vertical stacking and unstacking of stones gives a three dimensional element to the game play. A player may move a single piece or a stack of pieces they control. A stack is made when a player moves a stone on top of another flat stone of any color. The stone on top of a stack determines which player has control of that entire stack. All stones move orthogonally in a straight line on the board. There is no diagonal movement. A player can also move a whole stack in addition to single stones. A stack can be moved like a single stone, moved in its entirety one space orthogonally (North, South, East, or West), or it can move several spaces orthogonally by breaking the stack and placing one or more flat stones onto the squares being moved onto. The player can leave any number of stones, including zero, on the starting space, but must place at least one piece for each subsequent move. There is no height limit for stacks, but the amount of stones a player can remove from the stack and move is set by the "carry limit" of the board. The carry limit of the board is determined by the dimensions of the board. For example, if the stack was on a 5x5 board, the carry limit of the stack would be five. Because standing stones and capstones can't be stacked upon, there are no stacks with these pieces at the bottom or in the middle of the stack. Both of these stones however can be moved onto other flat stones to form a stack with them as the head. A capstone may "flatten" a standing stone and use it to form a stack with the capstone as its head, but it must do so alone. For example, a stack with a capstone cannot flatten a standing stone by moving as a stack onto the standing stone, but a stack can be used to move a capstone across the board so that the capstone alone moves to flatten the standing stone as the final movement. 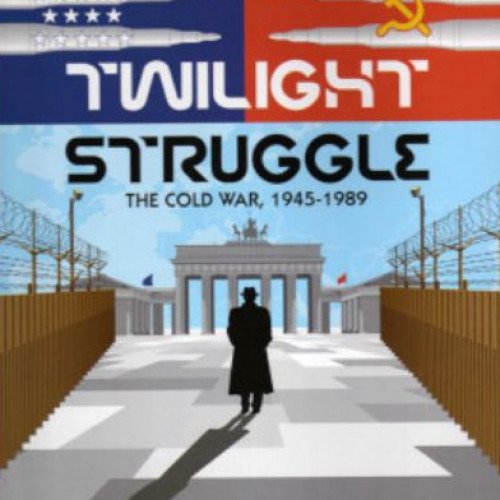 Twilight Struggle: The Cold War, 1945–1989 is a board game for two players, published by GMT Games in 2005. Players are the United States and Soviet Union contesting each other's influence on the world map by using cards that correspond to historical events. The first game designed by Ananda Gupta and Jason Matthews, they intended it to be a quick-playing alternative to more complex card-driven wargames. It achieved critical acclaim for its well-integrated theme, accessibility and introduction of Eurogame elements. After being voted the number one game on BoardGameGeek from December 2010 to January 2016, it has been called "the best board game on the planet". Twilight Struggle is played competitively and was unofficially adapted for play-by-email and live online play. GMT released a Deluxe Edition in 2009, as well as a Collector's Edition as part of the crowdfunding campaign for the game's official adaptation into a video game; this Digital Edition was released in 2016. With over 100,000 copies sold, the game is GMT's all-time best-seller. According to its designers, "Twilight Struggle basically accepts all of the internal logic of the Cold War as true—even those parts of it that are demonstrably false." The game board thus presents a map of a bipolar world according to domino theory, where the US and USSR spread influence to all other countries (except China, which is shown as a powerful card, which must be handed to the other player if used, representing China tilting from one bloc to the other), and attempt to establish control depending on the stability of a country. One scholarly analysis proposed that "hile Twilight Struggle is at its core an area control game, what set its apart from being marked as a Risk clone is the combined effect of material aesthetics and design mechanics meant to embrace a particular point of view tied to the Cold War zeitgeist." Gameplay is divided into ten turns. Each turn players randomly draw a hand of event cards from a single deck. The starting deck contains only early war cards, with historically appropriate mid war and late war events shuffled in on turns 4 and 8 (for a total of 103 cards in the first edition). Players both use a card in the turn's headline phase (in which each player must play a card for its event) and six to eight action rounds.