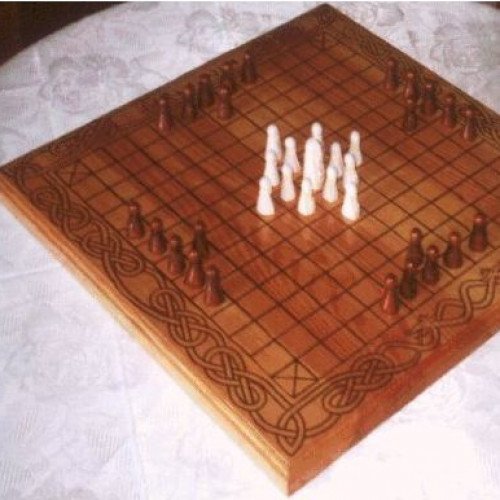 Tafl games (pronounced ], also known as hnefatafl games) are a family of ancient Nordic and Celtic strategy board games played on a checkered or latticed gameboard with two armies of uneven numbers. Most probably they are based upon the Roman game Ludus latrunculorum. Names of different variants of Tafl include Hnefatafl, Tablut, Tawlbwrdd, Brandubh, Ard Rí, and Alea Evangelii. Games in the tafl family were played in Norway, Sweden, Denmark, Iceland, Britain, Ireland, and Lapland. Tafl gaming was eventually supplanted by chess in the 12th Century, but the tafl variant of the Sami people, tablut, was in play until at least the 1700s. The rules for tablut were written down by the Swedish naturalist Linnaeus in 1732, and these were translated from Latin to English in 1811. All modern tafl games are based on the 1811 translation, which had many errors. New rules were added to amend the issues resulting from these errors, leading to the creation of a modern family of tafl games. In addition, tablut is now also played in accordance with its original rules, which have been retranslated. The term tafl (Old Norse: "table", "board"; pronounced ) is the original Norse name of the game. Hnefatafl (roughly) plausibly realised as ), became the preferred term for the game in Scandinavia by the end of the Viking Age, to distinguish it from other board games, such as Skáktafl (chess), Kvatrutafl (Tables) and Halatafl (Fox games), as these became known. The specific name Hnefatafl possibly arose as meaning "board game of the fist", from hnefi ("fist") + tafl, where "fist" referred to the central king-piece. The precise etymology is not entirely certain but hnefi certainly referred to the king-piece, and several sources refer to Hnefatafl as "King's table". In Anglo-Saxon England, the term tæfl also referred to many board games. It is not known if the Anglo-Saxons had a specific name for the game or if they generically referred to it as tæfl in the way that modern people might refer to "cards". Several games may be confused with tafl games, due to the inclusion of the word tafl in their names or other similarities. Halatafl is the Old Norse name for Fox and Geese, a game dating from at least the 14th century. It is still known and played in Europe. Kvatrutafl is the Old Norse name for Tables (the medieval forerunner of Backgammon). Skáktafl is the Old Norse name for chess. Fidchell or Fithcheall (Modern Irish: Ficheall) was played in Ireland. The Welsh equivalent was Gwyddbwyll and the Breton equivalent Gwezboell; all terms mean "wood-sense". This popular medieval game was played with equal forces on each side and thus was not a tafl variant, but rather may have been the medieval descendant of the Roman game Latrunculi or Ludus latrunculorum. 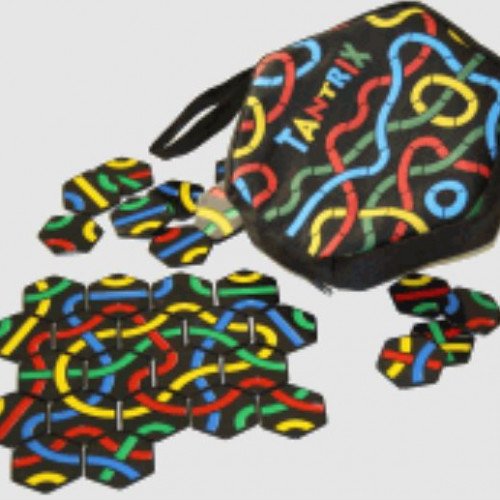 Tantrix is a hexagonal tile-based abstract game invented by Mike McManaway from New Zealand. Each of the 56 different tiles in the set contains three lines, going from one edge of the tile to another. No two lines on a tile have the same colour. There are four colours in the set: red, yellow, blue, and green. No two tiles are identical, and each is individually numbered from 1 through 56. In the multiplayer version of the game, each player chooses a colour, so there are between two and four players. Each draws one tile from the bag, and the person who draws the highest number goes first. Each player then takes five more tiles from the bag, and places all six tiles face up in front of them. The first person plays one tile, usually with their colour on it. Play then rotates clockwise. After playing a tile, each player takes a replacement tile from the bag, so that they always have six in front of them. Tiles played must match the colour of the edges adjoining it. When three tiles surround an empty space so that it is effectively half covered this is called a forced space. If the person whose turn it is has a tile that fills that space they must play it. The player repeats this process until there are no more forced spaces that they can fill, at which stage they make a free move, where they can play any tile as long as they don't breach the three restriction rules given below. Once they have had a free move, they must then fill any more forced spaces that they can. Thus one player's turn can consist of several moves.