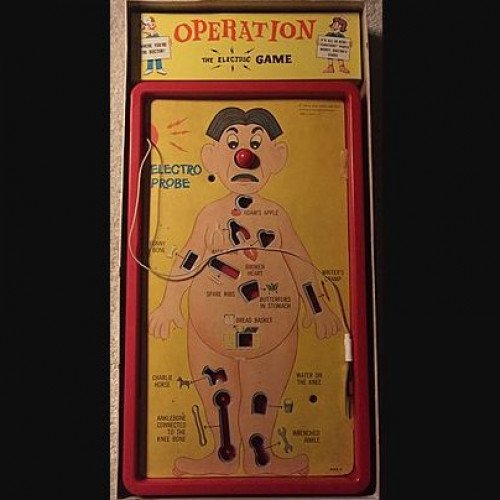 Operation is a battery-operated game of physical skill that tests players' hand-eye coordination and fine motor skills. The game's prototype was invented in 1964 by John Spinello, a University of Illinois industrial design student at the time, who sold his rights to the game to renowned toy designer Marvin Glass for a sum of US$500 and the promise of a job upon graduation (a promise that was not upheld). Initially produced by Milton Bradley in 1965, Operation is currently made by Hasbro, with an estimated franchise worth of US$40 million. The game is a variant on the old-fashioned electrified wire loop game popular at funfairs. It consists of an "operating table", lithographed with a comic likeness of a patient (nicknamed "Cavity Sam") with a large red lightbulb for his nose. This could be a reference to classic cartoons, where ill characters' noses turn red. In the surface are a number of openings, which reveal cavities filled with fictional and humorously named ailments made of plastic. The general gameplay requires players to remove these plastic ailments with a pair of tweezers without touching the edge of the cavity opening. 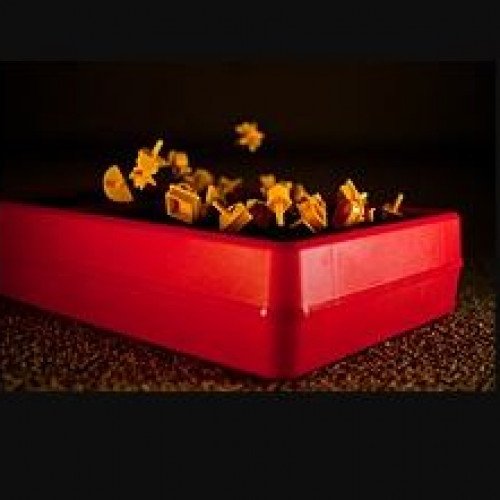 Perfection, originally produced by the Pennsylvania company Reed Toys, is a game by the Milton Bradley company. The object is to put all the pieces into matching holes on the board (pushed down) before the time limit runs out. When time runs out, the board springs up, causing many, if not all, of the pieces to fly out. In the most common version, there are 25 pieces to be placed into a 5×5 grid within 100 seconds. In the original version, one player at a time attempts to fit all 25 shapes into the holes in the game tray. The shapes are mixed and placed next to the game unit with handles facing up, the pop-up tray is pushed down, and the timer dial is set to 60 seconds. After moving the switch to START, the timer begins to run and the player must fit the shapes into their holes as quickly as possible. If the player completes this task, he/she moves the switch to STOP and records the time taken. If time runs out, the tray pops up and scatters the pieces in all directions. The winner is the player who fills the tray in the shortest time. The original Perfection game consists of a red and yellow board with 25 shapes. Its "pop-up" mechanism was an ejector plate situated under the shaped holes and lowered by a PUSH button. The board also included a scoreboard with four stackable pegs of different colors. One point was scored for each shape properly placed in their correct holes; if all 25 shapes were inserted before the allotted 60 seconds, one point was also scored for each remaining second left on the clock. For tie scores, pegs were stacked on top of one another.