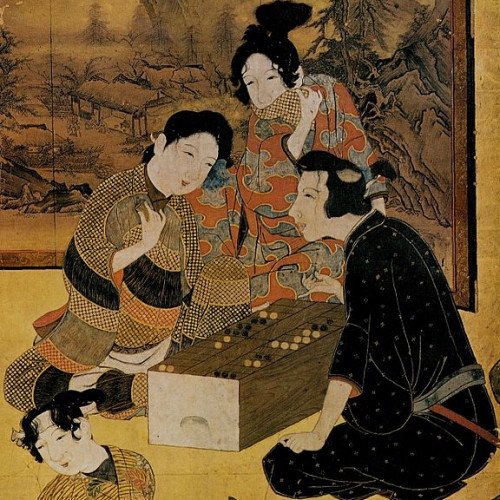 Sugoroku (雙六 or 双六) (literally 'double six') refers to two different forms of a Japanese board game: ban-sugoroku (盤双六, 'board-sugoroku') which is similar to western backgammon, and e-sugoroku (絵双六, 'picture-sugoroku') which is similar to western Snakes and Ladders. The game is thought to have been introduced from China (where it was known as Shuanglu) into Japan in the sixth century. It is known that in the centuries following the game's introduction into Japan it was made illegal several times, most prominently in 689 and 754. This is because the simple and luck-based nature of sugoroku made it an ideal gambling game. This version of sugoroku and records of playing for gambling continuously appeared until early Edo era. In early Edo-era, a new and quick gambling game called Chō-han (丁半) appeared and using sugoroku for gambling quickly dwindled. This variant of the backgammon family has died out in Japan and most other countries, with the Western style modern backgammon (with doubling-cube) having some avid players. A simpler e-sugoroku, with rules similar to snakes and ladders, appeared as early as late 13th century and was made popular due to the cheap and elaborate wooden block printing technology of the Edo period. Thousands of variations of boards were made with pictures and themes from religion, political, actors, and even adult material. In the Meiji and later periods, this variation of the game remained popular and was often included in child-oriented magazines. With ban-sugoroku being obsolete, today the word sugoroku almost always means e-sugoroku. 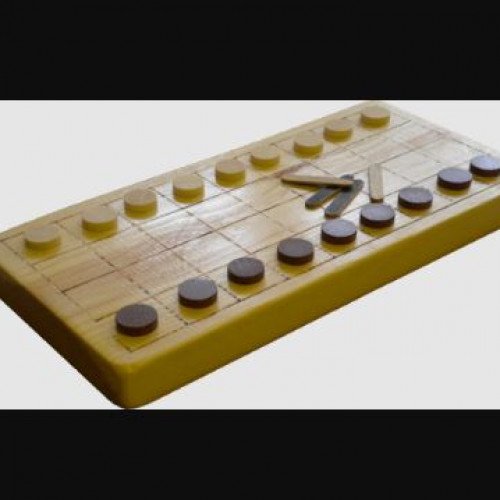 Tâb is the Egyptian name of a running-fight board game played in several Muslim (mostly Arab) countries, and a family of similar board games played in North Africa (as sîg) and Western Asia, from Iran to West Africa and from Turkey to Somalia, where a variant called deleb is played. The rules and boards can vary widely across the region though almost all consist of boards with three or four rows. A reference to "at-tâb wa-d-dukk" (likely a similar game) occurs in a poem of 1310 CE. The game described here was recorded by Edward William Lane in Egypt in the 1820s. Egyptian tâb is played by two players on a board, often delineated at the ground. The board is four squares wide, and usually an odd number of squares long, usually from 7 to 15, but formerly up to 29 squares. Numbering the four rows 1, 2, 3 and 4, from the start one player has one (nominally) white piece in each field of row 1, and the other a (nominally) black piece in each field of row 4. The pieces may be stones or made from burnt clay. In Egypt, the pieces are referred to as kelb, meaning dog. As in the Ancient Egyptian game Senet and the Korean game Yut, four sticks of a roughly semi-circular cross-section are used as dice. The flat sides are (nominally) white, and the rounded sides are (nominally) black. The value of a throw depends on the number of black and white sides showing, as indicated in the following table. For each piece, the first move must be a tâb, which converts the piece from a Christian to a Muslim in addition to moving it one field ahead. Typically all initial tâbs are used to convert pieces, and only later are tâbs used for other purposes. The pieces move as shown in the diagram, here shown for "White" starting in its home row A-I. The other player ("Black" starting in home row a-i) moves in the same way, meaning that black and white pieces move in the same direction through each of the rows. When a white piece gets to square s, White can choose to send the piece to a or back to K. However, a given piece can only go into its opponent's home row (for White, a-i) once; the next time it must go back to K, thereafter merely circulating through the 2 middle rows. Once in its opponent's home row, a piece cannot move any further as long as there are any pieces left in its own home row. No piece ever returns to its own home row.