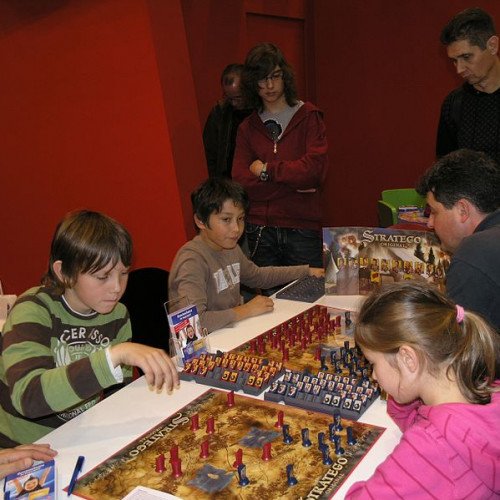 Stratego is a strategy board game for two players on a board of 10×10 squares. Each player controls 40 pieces representing individual officer and soldier ranks in an army. The pieces have Napoleonic insignia. The objective of the game is to find and capture the opponent's Flag, or to capture so many enemy pieces that the opponent cannot make any further moves. Stratego has simple enough rules for young children to play but a depth of strategy that is also appealing to adults. The game is a slightly modified copy of an early 20th century French game named L'Attaque. It has been in production in Europe since World War II and the United States since 1961. There are now two- and four-handed versions, versions with 10, 30 or 40 pieces per player, and boards with smaller sizes (number of spaces). There are also variant pieces and different rulesets. The International Stratego Federation, the game's governing body, sponsors an annual Stratego World Championship. The name Stratego was first registered in 1942 in the Netherlands. The United States trademark was filed in 1958 and registered in 1960 to Jacques Johan Mogendorff and is presently owned by Jumbo Games as successors to Hausemann and Hotte, headquartered in the Netherlands. It has been licensed to manufacturers such as Milton Bradley, Hasbro and others, as well as retailers such as Barnes & Noble, Target stores, etc. The game box contents are a set of 40 gold-embossed red playing pieces, a set of 40 silver-embossed blue playing pieces, a glossy folding 15 1⁄2 in × 18 1⁄2 in (39 cm × 47 cm) rectangular cardboard playing board imprinted with a 10×10 grid of spaces, and instructions printed in English on the underside of the box top. The early sets featured painted wood pieces, later sets colored plastic. The pieces are small and roughly rectangular, 1 in (25 mm) tall and 3⁄4 in (19 mm) wide, and unweighted. More modern versions first introduced in Europe have cylindrical castle-shaped pieces. Some versions have a cardboard privacy screen to assist setup. A few versions have wooden boxes or boards. 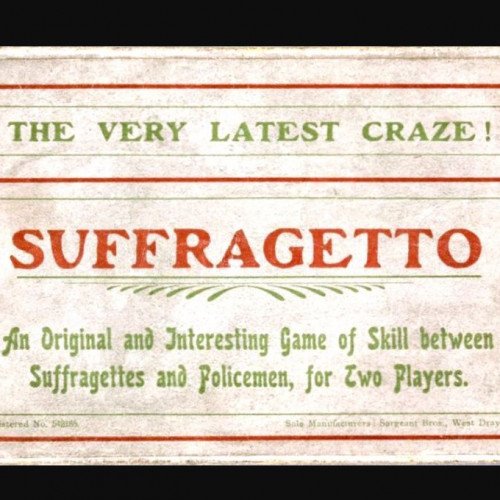 Suffragetto was a board game published in the United Kingdom around 1908 by the Women's Social and Political Union (WSPU) and manufactured by Sargeant Bros. Ltd. In modern terms, it was developed to "enact feminist ideology in a hybrid fantasy-real world environment" to support the activist strategies of the suffragettes. The game is a contest of occupation featuring two players around a grid board representing the streets of Edwardian London. One player plays 21 green markers as the radical suffragettes, the other player plays 21 dark blue markers as the police constables. The objective of the suffragettes is to break through police lines and enter the House of Commons, while at the same time preventing the police from entering Albert Hall. The objective of the police is to disrupt the meeting of the suffragettes by entering Albert Hall, while at the same time preventing them from entering the House of Commons. "Arrested" suffragettes are confined to the "prison" section of the board, whereas "disabled" constables are confined to the "hospital" section. The game is won by the first player who introduces six markers into the opponent's base. The WSPU were enthusiastic about manufacturing and selling the game, as it would allow the organisation to continue running without having to depend on donations from wealthy individuals. Oxford's Bodleian Libraries has the only known surviving copy of the game. Suffragetto was among several children's games designed at that time around the themes of gender, resistance, and social relationships, along with the contemporaneous games Panko and Pank-a-Squith (1909). The goal of the latter was to navigate a suffragette (led by Emmeline Pankhurst) down a long path from her home to parliament, past obstacles placed by the Liberal government (led by Prime Minister H. H. Asquith).