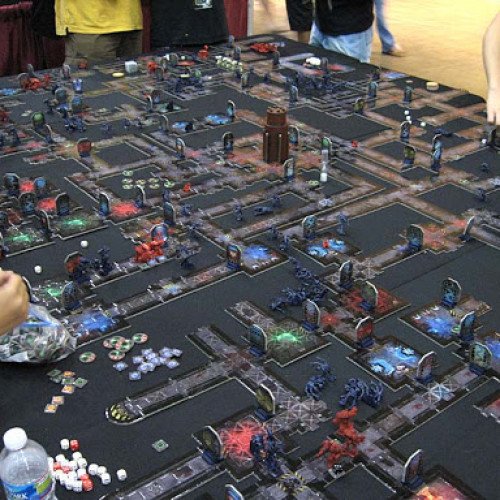 Space Hulk is a board game for two players by Games Workshop. It was released in 1989. The game is set in the fictional universe of Warhammer 40,000. In the game, a "space hulk" is a mass of ancient, derelict space ships, asteroids, and other assorted space debris. One player takes the role of Space Marine Terminators, superhuman elite soldiers who have been sent to investigate such a space hulk. The other player takes the role of Tyranid Genestealers, an aggressive alien species which have made their home aboard such masses. In Warhammer 40,000, the term "space hulk" is used to refer to any massive derelict space ship. Due to the shifting, immaterial nature of the Warp, an otherworldly realm through which space ships may travel between the stars far quicker than they would be able to through real space, some space hulks are jumbled and twisted agglomerations of multiple vessels lost to the Warp throughout centuries or millennia. Space hulks may house more than just Genestealers; other threats aboard can include human followers of the dark gods of Chaos, nightmarish Warp Daemons, and Orks who use space hulks as their "standard" method of interstellar travel. Genestealers were described in an entry of the "Aliens and monsters" section of the first edition of Warhammer 40,000 (the "WH40K - Rogue Trader" manual), but they were very different from their Space Hulk incarnation, which was more influenced by the xenomorphs depicted in the Alien franchise. Since the 1990s, subsequent games like Warhammer 40,000 and Epic have absorbed them as part of the overall Tyranid army where they serve as the shock troops, although their origins are not related to any other Tyranid broods. A force composed purely of Genestealers can still be fielded as a sub-type of the Tyranid army, in what is known as a Genestealer Cult. The Cult is described in the in-game background as an infiltration force that weakens a target planet, infecting the local population and causing civil unrest in advance of the arrival of the main Tyranid hive fleet. 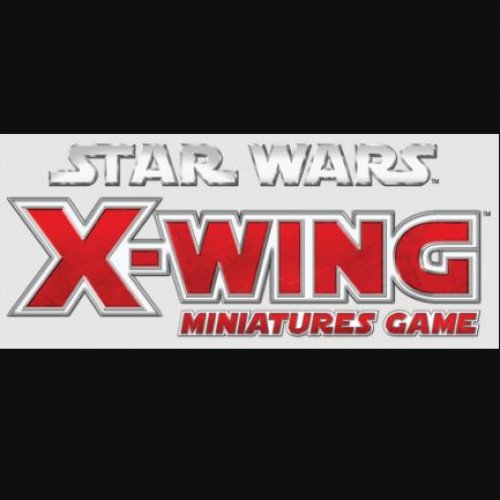 Star Wars: X-Wing is a miniature war game designed by Jay Little and produced by Fantasy Flight Games that was released at Gen Con during August 17, 2012. It features tactical ship-to-ship dogfighting between various types of starfighters set in the fictional Star Wars universe. The game is said to be easy to learn and quick to play taking anywhere between 15 and 60 minutes from first set-up to battle's end. Each round both players give all their ships movement orders without knowing what their opponent is doing before resolving these orders while trying to shoot down enemy craft. On May 1, 2018 FFG announced X-Wing Second Edition, to be released on September 13, 2018. Although the physical models are transferable, an entire new set of rules, templates, and markers have been produced and are available through a new core set, waves, and conversion packs. "X-Wing is a tactical ship-to-ship combat game in which players take control of powerful Rebel X-wing fighters and nimble Imperial TIE fighters, facing them against each other in fast-paced space combat. Featuring stunningly detailed and painted miniatures, X-Wing recreates exciting Star Wars space combat throughout its several included scenarios. Select your crew, plan your maneuvers, and complete your mission! The X-Wing starter set includes everything you need to begin your battles, such as scenarios, cards, and fully assembled and painted ships. What's more, X-Wing's quick-to-learn ruleset establishes the foundation for a system that can be expanded with your favorite ships and characters from the Star Wars universe."