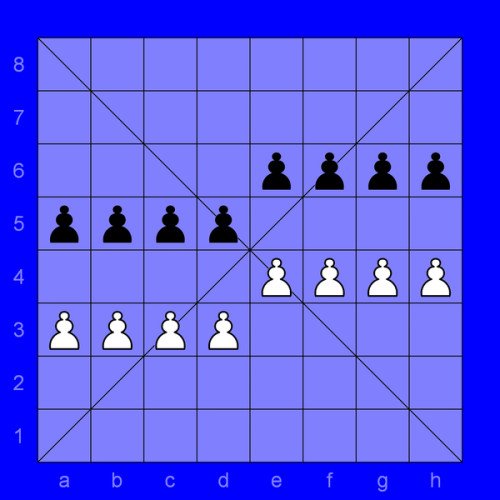 Sittuyin (Burmese: စစ်တုရင်), also known as Burmese chess, is a variant of chess that is a direct offspring of the Indian game of chaturanga which arrived in 8th century AD. Sit is the modern Burmese word for army or war ; the word sittuyin can be translated as representation of the four characteristics of army—chariot, elephant, cavalry and infantry. In its native land the game has been largely overshadowed by Western (international) chess, although it remains popular in the northwest regions. The sittuyin board consists of 64 squares, 8 rows and 8 columns, without alternating colors. It also consists of two diagonal lines across the board known as sit-ke-myin (general's lines). Only feudal lords (pawns) are on the board in the initial position. The game starts with the Red player (depicted here having white pieces), followed by the Black player, placing their other pieces arbitrarily on their own halves of the board (known as sit-tee or troops deployment): chariots can be put on any square on the back rank. In official tournaments, a small curtain is used on the middle of the board to prevent the players seeing each other's deployment during the sit-tee phase. One of the possible game openings is shown in the diagram. Feudal lords promote to general when they reach diagonal lines marked on the board. The promotion is possible only if that player's general has been captured. If the player has a feudal lord on a promotion square and his or her general is no longer on the board, the player can (if he or she wishes to) promote the feudal lord to general instead of making a move. A feudal lord which passes the promotion square cannot promote anymore. 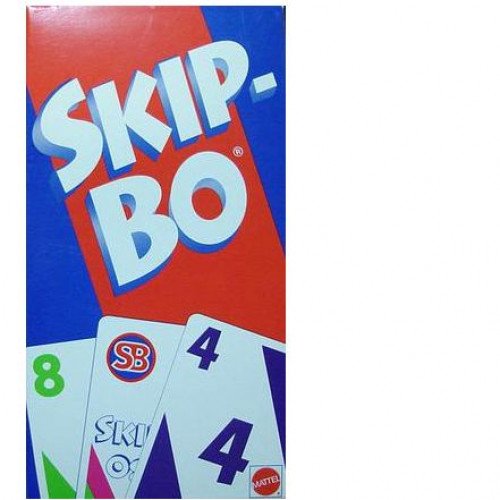 Skip-Bo is a commercial version of the card game Spite and Malice, a derivative of Russian Bank (also known as Crapette or Tunj). In 1967, Minnie Hazel "Skip" Bowman (1915–2001) of Brownfield, Texas, began producing a boxed edition of the game under the name SKIP-BO. In 1980 the game was purchased by International Games, which was subsequently bought by Mattel in 1992. A mobile version of the game for iOS was released by Magmic in September, 2013. There is a new version called "SKIP-BO Mod" that comes in a white and blue case. Two to four people can play at a time as individuals, or, six or more players in teams (no more than three partnerships). The object of the game is to be the first player or team to play out their entire stock pile(s). The player with the middle age goes first. Each player is dealt 30 cards (recommended 10-15 for faster gameplay) for their pile with only the top card visible, and a hand of five cards, and the remaining cards are placed face down to create a common draw pile. The shared play area allows up to four build piles, which must be started using either a "1" card or a Skip-Bo, and each player also has up to four personal discard piles. Each turn the active player draws until they have five cards in hand, though there are cases of not drawing more cards to equal five cards, instead doing a draw of a certain number of cards. They must play either the next card in sequential order or a wild Skip-Bo card, using either cards in hand, the top card of their stock pile, or the top card of any of their four discard piles. If the player can play all five cards from their hand, they draw five more and continue playing. When no more plays are available, the player discards one card to either an empty discard pile or on top of an existing one and play passes to the next player. When a build pile reaches 12, it is removed from the board and that space becomes empty for another pile to be started; play continues until one player has played their final start card.