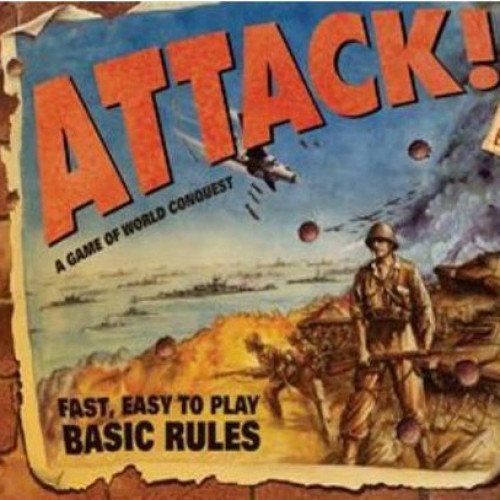 Attack! is a board game created by Glenn Drover and published by Eagle Games in 2003. It is a light war game that is midway between Risk and Axis and Allies in complexity. The game is loosely set in the 1930s and includes plastic pieces featuring tanks, planes, infantry, and artillery. Attack! won the Origins Award for Best Historical Game 2003. Like Risk, Attack! allows the players to create their own military states on a board showing a map of the Earth divided into territories and attack other players in an attempt to conquer the world, although the victory conditions for Attack! are a bit different from world domination. In the original game the victor is determined by how many territories each player has. When a player is knocked out by losing all of his or her territories or a pre-determined time limit is reached, each players' territories are then tallied and the player with the most is the victor. In the expansion to the board game, victory points are added. Whichever player has the most victory points by the end of the game wins. Victory points are tallied differently depending on what government type one has. The game is supposed to be set in the pre-World War II era. Players start with 12 infantry, six tanks, four artillery, and two planes. They also start with one battleship, two destroyers, and two subs. Each player chooses 4 territories of their liking, and sets their capital on 1 of the four territories. Three attacks are possible each turn: a move, a Blitzkrieg move, an attack, a diplomacy, or spend on units. In one turn, player is able to do three actions. Each player does their turn in a circle, the person with the highest die roll going first. Minor powers can be attacked by drawing an economic card, which shows the number of the minor nation's units, and are successfully annexed if the player defeats it. Nevertheless, the game also allows for peaceful annexation of minor nations. 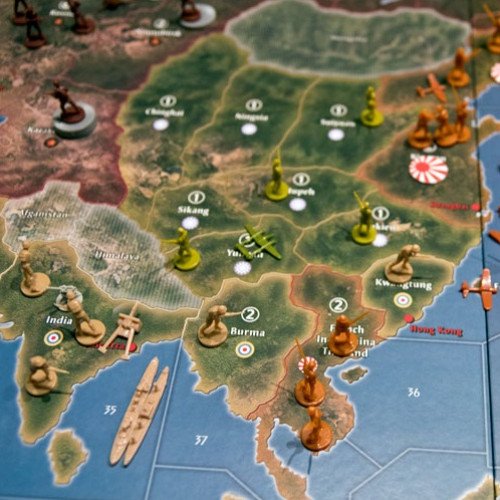 Axis & Allies is a series of World War II strategy board games. The first version was first published in 1981 and a second edition known retroactively as Axis & Allies: Classic was published in 1984. Played on a board depicting a Spring 1942 political map of Earth divided by territories, players take the role of one or more of the five major belligerents of World War II: the Axis powers of Germany and Japan; and the Allied powers of the Soviet Union, the United Kingdom, and the United States. Turn rotates among these belligerents, who control armies of playing pieces with which they attempt to capture enemy territories, with results determined by dice rolls. More than ten spinoff games have since been produced. Some of these editions are revised versions of the classic game, while others depict a specific theater, campaign or battle of World War II. Originally designed by Larry Harris and published by Nova Game Designs in 1981, the game was republished by the Milton Bradley Company in 1984 as part of the Gamemaster Series of board games. This edition has been retroactively named Axis & Allies: Classic to differentiate it from later revisions. In 1996, Axis & Allies: Classic was inducted into the Academy of Adventure Gaming Arts & Design Adventure Gaming Hall of Fame. Games magazine also has inducted Axis & Allies into their buyers' guide Hall of Fame, an honor the magazine extends to "games that have met or exceeded the highest standards of quality and play value and have been continuously in production for at least 10 years; i.e., classics."Axis & Allies: Classic was the most successful of the five Gamemaster Series of board games. Long after the Gamemaster name was retired, A&A: Classic lives on having been moved to the Avalon Hill lineup following the acquisition of Milton Bradley Company and Avalon Hill by Hasbro. The game itself has gone through several revisions, most recently in 2013. The object of the game and its spinoffs is to win the war by capturing enough critical territories to gain the advantage over the enemy in a recreation of World War II. After acquiring Milton Bradley (1984) and Avalon Hill (1998), Hasbro transferred the Axis & Allies: Classic (1984) board game from the Milton Bradley division to the Avalon Hill division in 1999. In 1999, Hasbro acquired Wizards of the Coast. In 2004, Hasbro made Avalon Hill a subsidiary of Wizards of the Coast (WotC). The Axis & Allies (1984–present) board game series is currently produced by WotC under the Avalon Hill label. Hasbro is the parent company. There are a total of 11 board games in the Axis & Allies series, 8 of which are currently available from many game resellers. The two out-of-print A&A board games, Axis & Allies: Classic (1984) and Axis & Allies: 50th Anniversary Edition (2008) can be found on various auction websites.