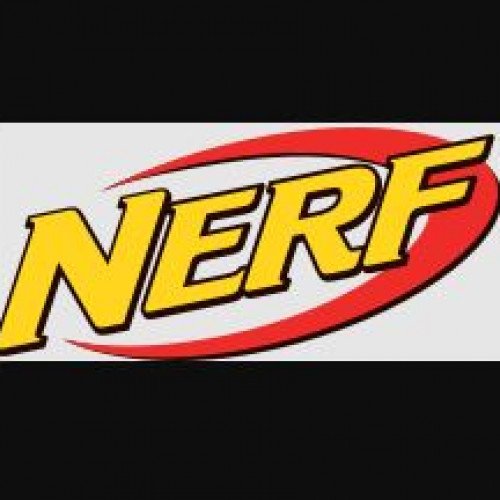 Nerf (trademarked in capitals as NERF) is a toy brand formed by Parker Brothers and currently owned by Hasbro. Most of the toys are a variety of foam-based weaponry, with other Nerf products including balls for sports such as American football, basketball, and baseball. The most notable of the toys are their dart guns (referred to by Hasbro as "blasters") that shoot ammunition made from "Nerf foam" (partially reticulated polyether type polyurethane foam). Since many such items were released during the 1970s, Nerf products often feature bright neon colors and soft textures similar to the flagship Nerf ball. Their slogan, which has been frequently used since advertising in the 1990s, is "It's Nerf or Nothin'!". Annual revenues under the Nerf brand are approximately US$400 million. Parker Brothers originally developed Nerf, beginning with a 4-inch (100 mm) polyurethane foam ball. In 1969, Reyn Guyer, a Minnesota-based games inventor, came to the company with a football game that was safe for indoor play, and after studying it carefully, Parker Brothers decided to eliminate everything but the foam ball. In 1970, the Nerf ball was introduced as the "world's first official indoor ball", the name "Nerf" being a slang term for the foam padding used in off-roading. Marketing slogans promised that one can "Throw it indoors; you can't damage lamps or break windows. You can't hurt babies or old people." Some of the first TV commercials for the balls were joint promotions with General Foods' Kool-Aid drink mix, with Micky Dolenz, Davy Jones and Michael Nesmith of the Monkees playing with the balls on a living room soundstage (Kool-Aid sponsored the 1969-70 Saturday morning reruns of the Monkees' 1966-67 TV series). The ball filled a strong consumer need and by the year's end, more than four million Nerf balls had been sold. 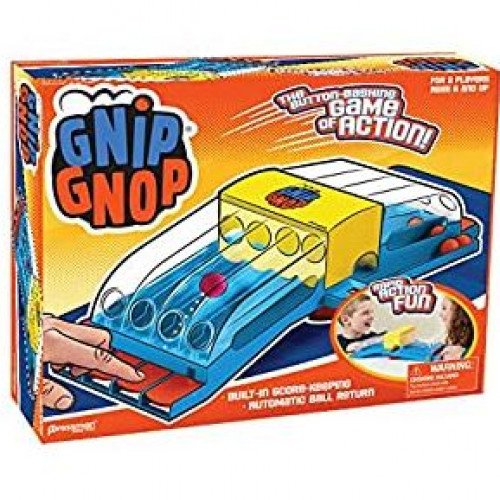 Gnip Gnop (pronounced with hard G's, as in Swedish gnista) is a two-player plastic table-top game, consisting of a sides- and top-transparent rectangular enclosure containing six plastic balls. The enclosure is bisected into two chambers or zones by a similarly transparent barrier having three holes slightly larger than the balls. At each end of the unit a player uses any of a row of three hinged paddles to shoot the balls up a slightly-inclined plane through the holes into the opposing player's zone. The game begins with three balls on each side. The object is to win the game by rapidly shooting the balls until the moment all six balls end up in the other player's zone simultaneously. Gnip Gnop was designed and named by Joseph M. Burck of Marvin Glass and Associates for Parker Brothers. It was originally released in 1971. Fundex Games later produced a slightly modified version of the game. The name is the backward spelling of "Ping-Pong", the common name for table tennis.