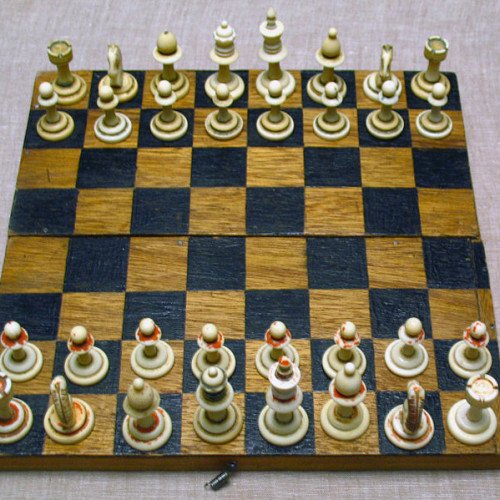 Shatar (Mongolian: ᠮᠣᠩᠭᠣᠯ ᠰᠢᠲᠠᠷ᠎ᠠ Monggol sitar-a, "Mongolian shatranj"; a.k.a. shatar) and hiashatar are two chess variants played in Mongolia. The rules are similar to standard chess; the differences being that: The noyan (ᠨᠣᠶᠠᠨ, lord) does not castle. The küü (ᠬᠦᠦ, pawn) does not have an initial double-step move option, except for the queen pawn or king pawn. In old shatar rules, a pawn that reaches its eighth rank must promote to half-power tiger. But a pawn could step back to its sixth rank to promote to all-power tiger. It moves like a queen. The baras (ᠪᠠᠷᠰ or ᠪᠠᠷᠠᠰ, tiger; Persian: fers) moves like a promoted rook in shogi: like a chess rook or one square diagonally. It was called half-power tiger or half-power lion in old shatar rules. In modern shatar rules, a baras moves like a queen. The mori (knight; ᠮᠣᠷᠢ) cannot deliver mate. In modern shatar rules, the mori can give mate. The bishop (teme) and rook (terge) move as they do in standard chess. The game always starts by White playing 1.d4 and Black responding with 1...d5. This is the only time in the game a pawn may advance two squares; some sources claim this initial move can optionally be made with the e-pawn. In old shatar rules, Ujimqin player must make an initial double-step move with the queen pawn; in Chahar, the king pawn. In old shatar rules, baremate is draw. In old shatar rules, one special rule is called tuuxəi, like komi in Go. A player could leave the enemy with only two pieces remaining (noyan and another piece) at the end. Then he must start making checks using the terge or baras and make consecutive checks until checkmate. Before checkmate, number of consecutive checks is the number of tuuxəi. If a player wins by checkmate as in chess, he receives only one tuuxəi. A player usually leaves the enemy with one noyan and one küü to allow time to put his pieces into good positions for making consecutive checks. 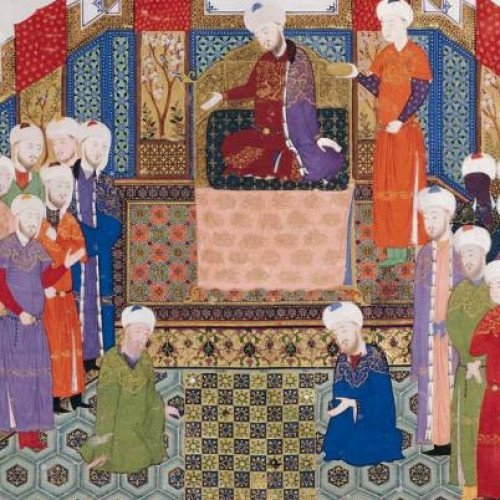 Shatranj (Arabic: شطرنج‎; Persian: شترنج‎; from Middle Persian chatrang چترنگ) is an old form of chess, as played in the Sasanian Empire. Its origins are in the Indian game of chaturaṅga. Modern chess gradually developed from this game, as it was introduced to the western world by contacts in Muslim Al-Andalus (modern Spain) and in Sicily in the 10th century. The Persian word shatranj ultimately derives from Sanskrit (Sanskrit: चतुरङ्ग; caturaṅga) (catuḥ: "four"; anga: "arm"), referring to the game of the same name: Chaturanga. In Middle Persian the word appears as chatrang, with the 'u' lost due to syncope and the 'a' lost to apocope, such as in the title of the text Mâdayân î chatrang ("Book of Chess") from the 7th century AD. In Persian folk etymology, a Persian text refers to Shah Ardashir I, who ruled from 224–241, as a master of the game: Three books written in Pahlavi, Kar-Namag i Ardashir i Pabagan, Khosrow and ridag, and Wizārišn ī čhatrang ("Treatise on Chess"), also known as the Chatrang Nama ("Book of Chess"), all mention chatrang. In Kār-nāmak it is said that Ardashīr "with the help of the gods became more victorious and experienced than all others in polo, horsemanship, chess, backgammon, and other arts," and in the small treatise on Khosrow and ridag, the latter declares that he is superior to his comrades in chess, backgammon, and hašt pāy. Bozorgmehr, the author of Wizārišn ī čhatrang, describes how the game of chess was sent as a test to Khosrow I (r. 531-79) by the "king of the Hindus Dēvsarm" with the envoy Takhtarītūs and how the test was answered by the vizier Bozorgmehr, who in his turn invented the game Backgammon as a test for the Hindus. These three Middle Persian sources do not give any certain indication of the date when chess was introduced into Persia. The mentions of chess in Kar-Namag i Ardashir i Pabagan and Khosrow and ridag are simply conventional and may easily represent late Sasanian or even post-Sasanian redactions. According to Touraj Daryaee, Kar-Namag i Ardashir i Pabagan is from 6th century. Wizārišn ī čhatrang was written in the 6th century.