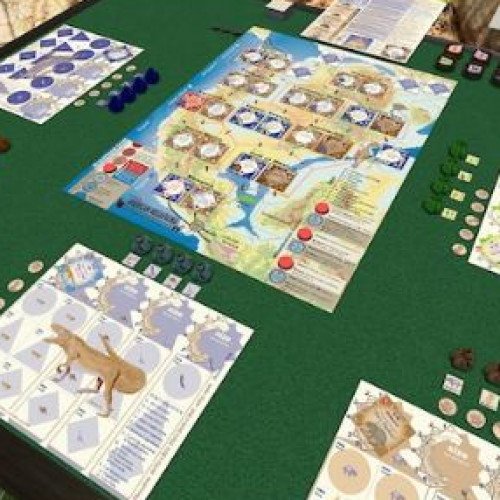 American Megafauna is a board game on the topic of evolution designed by Phil Eklund, and published by Sierra Madre Games in 1997. While the game is not an attempt to be a simulation, a variety of genuine evolutionary factors are incorporated in the game, ranging from Milankovich cycles to dentition. The game can be played in a solitaire mode as well as multi-player. It has subsequently gone out of print. In late 2011, Bios: Megafauna was released by Sierra Madre Games, essentially as a replacement for American Megafauna. This is a more streamlined version of American Megafauna, using some of the same design concepts, and being much more accessible. Playing time was reduced also, yet this new release retains its strong solitaire mode, as well as accommodating 2-4 players. It is a semi-scientific simulation in the same vein as Sierra Madre Games' 2010 popular release, High Frontier (board game). The game begins after the Permian-Triassic extinction event of 250 million years ago, which killed off 95% of all living species on Earth. Players can choose to begin the game as one of 4 Archetype species that start as herbivores, but can mutate into predators. Both mammals and dinosaurs are represented. There is a huge (almost endless) variety of species that can evolve via DNA chains, and the random tile map board setup is constantly changing due to certain random events (e.g., Erosion, Greenhouse and icehouse Earth, and Milankovich cycles), Catastrophes (e.g., an Impact event or a solar flare), and the addition of new Biome tiles during play. The map itself (reprented by tiles that are turned over and revealed) consists of a wide variety of land, sea, mountain, and other Biomes in four different latitudes. The goal of the game is to adapt your DNA, speciate, and survive amidst both environmental and living animal competition (represented by other players and wandering Immigrant animals that encroach upon the continent). Play time varies between 60–180 minutes depending on the number of participants and various rules being utilized. The next projected title in the series, Bios: Genesis (abiogenisis, the origins of life on Earth) is scheduled for a 2016 release. 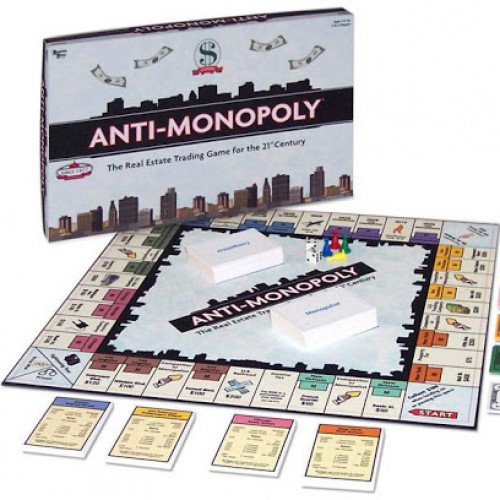 Anti-Monopoly is a board game made by San Francisco State University Professor Ralph Anspach in response to Monopoly. The idea of an anti-monopoly board game dates to 1903 and the original Monopoly created by Lizzie Magie. Anspach created Anti-Monopoly in part as a response to the lessons taught by the mainstream game, which he believed created the impression that monopolies were something desirable. His intent was to demonstrate how harmful monopolies could be to a free-enterprise system, and how antitrust laws work to curtail them in the real world. The game was originally to be produced in 1973 as Bust the Trust, but the title was changed to Anti-Monopoly. It has seen multiple printings and revisions since 1973. In 1984, a new version appeared as Anti-Monopoly II; this version was updated and re-released in 2005 without the numerical designation. The game is currently still in print, and is produced and distributed worldwide by University Games. The original Anti-Monopoly game begins with the board in a monopolised state, effectively the result of a completed Monopoly game. Instead of real estate and public utilities, properties in Anti-Monopoly are individual businesses that have been brought under single ownership. Players take the role of federal case workers bringing indictments against each monopolised business in an attempt to return the state of the board to a free market system. In Anti-Monopoly II individual players choose to play either by monopolist or competitor rules at the beginning of the game. This version plays more like the actual Monopoly game in that it is based on the buying and selling of real estate. Among other differences, competitors charge lower rents and can improve any property they own at any time, while monopolists must own at least two properties in a group before building houses on them and charge much higher rents.