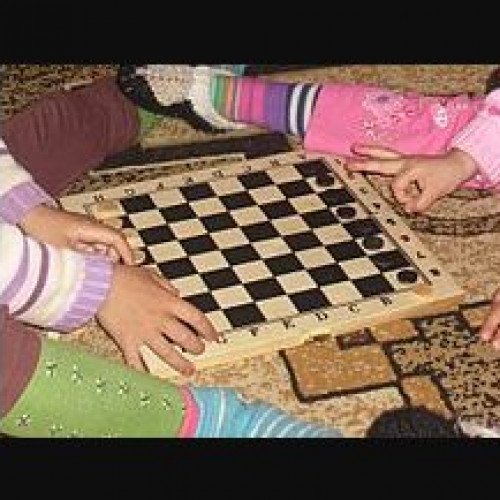 Chapayev (Russian: игра в Чапаева, romanized: igra v Chapayeva, 'game of Chapayev' or 'Chapayev's game') is a board game, a hybrid of checkers (draughts) and gamepiece-impact games like carrom, novuss, and pichenotte, giving it gameplay aspects in common with both billiards and table shuffleboard on a smaller scale, as well as some checkers strategy. It is played throughout the territory of the former USSR. The aim is to knock the opponent's pieces off the board. The game is named after the Russian Civil War hero, Vasily Chapayev. The game is played in several rounds, with two players (or potentially with two teams of players alternating turns or shots during their turn). During the first round, white pieces are placed on the first row, and black on the last. White opens the game. (To neutralize the advantage, the pie rule can be used, allowing the black player to choose to switch places after the first move; this is similar to the push out in the pocket billiards game nine-ball.) A player takes their turn by flicking one of his pieces with the index finger to shoot it at one or more of the opponent's pieces. If the move pushes one or more of the opponent's pieces off the board while all of the shooting player's own pieces remain, the player gets an extra move. When a move fails to dislodge an opponent's piece, or the player dislodges one of the player's own pieces, the opponent's turn to move begins. The game continues until only one colour remains on the board, winning the round. Then the winner starts the next round, with that player's pieces one row further forward. When the seventh round starts, the black and white rows will be next to each other. 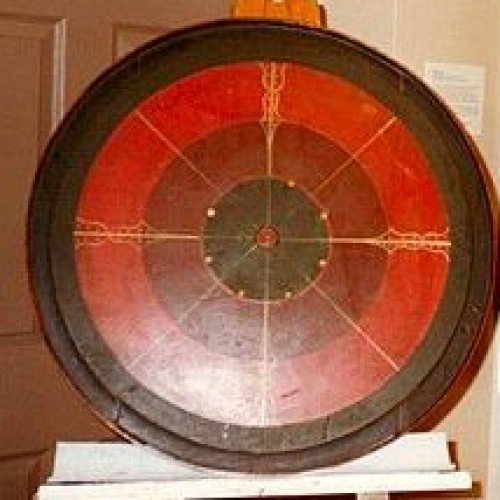 Crokinole (/ˈkroʊkɪnoʊl/ KROH-ki-nohl) is a disk-flicking dexterity board game, possibly of Canadian origin, similar to the games of pitchnut, carrom, and pichenotte, with elements of shuffleboard and curling reduced to table-top size. Players take turns shooting discs across the circular playing surface, trying to land their discs in the higher-scoring regions of the board, particularly the recessed center hole of 20 points, while also attempting to knock opposing discs off the board, and into the 'ditch'. In crokinole, the shooting is generally towards the center of the board, unlike carroms and pitchnut, where the shooting is towards the four outer corner pockets, as in pool. Crokinole is also played using cue sticks, and there is a special category for cue stick participants at the World Crokinole Championships in Tavistock, Ontario, Canada. Board dimensions vary with a playing surface typically of polished wood or laminate approximately 26 inches (660 mm) in diameter. The arrangement is 3 concentric rings worth 5, 10, and 15 points as you move in from the outside. There is a shallow 20-point hole at the center. The inner 15-point ring is guarded with 8 small bumpers or posts. The outer ring of the board is divided into four quadrants. The outer edge of the board is raised slightly to keep errant shots from flying out, with a gutter between the playing surface and the edge to collect discarded pieces. Crokinole boards are typically octagonal or round in shape. The wooden discs are roughly checker-sized, slightly smaller in diameter than the board's central hole, and typically have one side slightly concave and one side slightly convex, mainly due to the inherent features of wood, more than a planned design. Alternatively, the game may be played with ring-shaped pieces with a central hole.