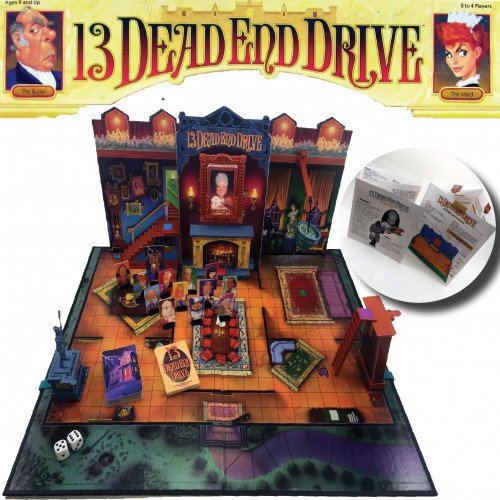 13 Dead End Drive is a murder-themed board game originally from Milton Bradley. Released in 1993, it was followed in 2002 by a spinoff, 1313 Dead End Drive. Currently, Winning Moves Games USA publishes the game in the USA. The story behind the game involves the death of a wealthy old woman triggering a feud over her will. The players utilize traps located on the game board, which represents a mansion, to kill characters controlled by other players in order to claim the estate for themselves. At the start of gameplay, players are dealt "Character cards" which correspond to matching pawns on the board. Since there are 12 characters, it is often the case that players control more than one character. However, which player controls which character is not revealed. Along with the character cards, there are also Portrait Cards, which determine who the current favorite for the inheritance is, and Trap Cards, which are used to spring traps and knock off other players. During each turn, a player rolls two dice and moves two pawns, one pawn for each die. It is legal for players to move a pawn that is not theirs in order to bring it closer to or onto a Trap Space. All pawns must be moved off the red chair spaces before any pawns can be moved a second time or onto a trap space. If a pawn is moved onto a trap space by exact roll only, the player must have the corresponding trap card in his or her possession in order to spring the trap. Springing traps is not mandatory, however. After that, play proceeds on to the next player. A pawn can not pass through or land on the same space as another pawn during the same turn. During the game, a Portrait Card is displayed in the picture frame above the fireplace. That character is now the current favorite to inherit the fortune. At that moment, for all intents and purposes, that character is now marked for death and must try to escape the mansion before he or she is either knocked off or the portrait changes (see "Special Spaces and Rules" below). Also, during the game, a Detective is waiting outside, slowly advancing toward the front door. His arrival signifies the reading of the will and the announcement of the winner. The Detective can only move one space at a time, and only when a Detective Card (hidden inside the Trap Card pile) is drawn. There are 13 steps to the front door. If the Detective makes it to the front door before all other characters have been eliminated, the game is over. 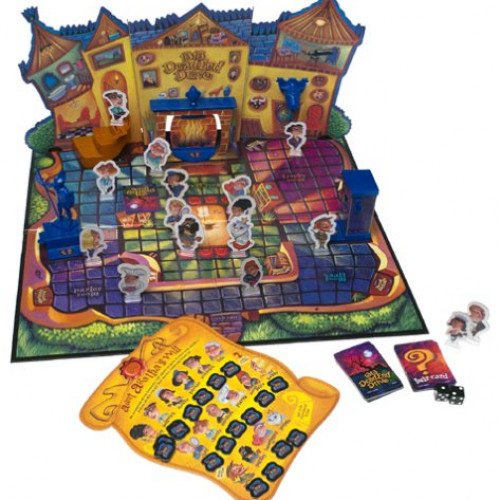 1313 Dead End Drive is a murder-themed board game from Parker Brothers. Released in 2002, it was the spinoff to the 1993 game 13 Dead End Drive. The story behind the game revolves around the death of Aunt Agatha, a wealthy old woman and heiress to a "kitty-litter empire". Sixteen of her closest companions have gathered at her estate for the reading of her will, and to collect their inheritance, they must escape Aunt Agatha's trap-filled mansion before midnight. At the start of gameplay, players are passed out "Heir Cards" which correspond to the pawns that are placed on the board. There are a total of sixteen characters, so it is almost always the case that players control more than one character. Players are required to keep the roles of their Character Cards secret from their opponents. Additionally there are thirty-two "Playing Cards," which allow players to do special things during their turn such as spring traps or instantly move pawns to other rooms. There is also one "Clock Strikes Midnight" card that is placed at the bottom of the Playing Cards, and if this card is drawn by any player, the game ends. During each turn, players roll two dice and move two pawns which correspond to each dice roll. Players are allowed to move any pawn on the board, regardless if they hold its corresponding Heir Card or not, so that they can move it closer to or further away from a trap space or the door. A pawn can be moved onto a Trap space by exact roll only, and when a pawn is moved onto a Trap space, the player must draw a card from the Playing Cards stack. To spring a trap, a player must have a corresponding trap card in their possession. Springing traps is not mandatory, however. There are also Secret Passage spaces that players can use to quickly travel around the mansion. Also during the game, players must pay attention to Aunt Agatha's will, which changes with the death of each character. The will contains the portrait of each character and is organized in a chain-like fashion. Every character begins with a single money bag token, except for Spritzy, who begins with four, and Sedgewick, who begins with two. When a character is "knocked off", their money tokens go to the next character in line of the will. When the last surviving character of the will is knocked off, their money tokens go to the "Pet Pals Retirement Home", and no one receives the money. If a character escapes the mansion, their money bag tokens are removed from the will and their space on the will is skipped over if a character preceding them on the will is knocked off.