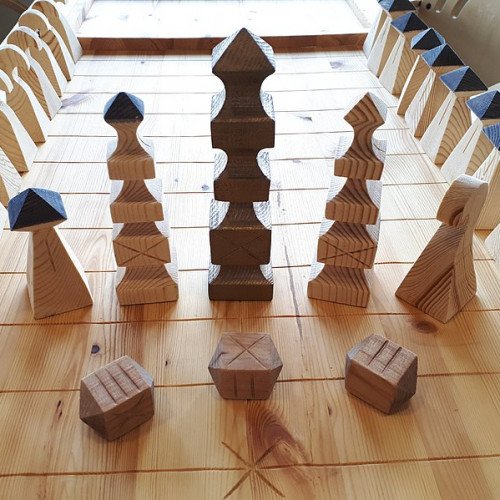 Sáhkku is a board game of the Sami people. The game is traditional among the North Sámi, Skolt Sámi, Inari Sámi and Lule Sámi but may also have been played in other parts of Sápmi. Sáhkku is a running-fight game, which means that players move their pieces along a track with the goal of eliminating the other players' pieces. Many different variants of sáhkku have been played in different parts of Sápmi. The oral transfer of the sáhkku rules between generations was largely broken off during the 1900s (see Sáhkku today). A few of the local variants have survived into our time, other local variants have been reconstructed based on a combination of memories and written sources, and for some places only fragments of the local rules are known from old documents. A sáhkku board (sáhkkufiellu, bircunfiellu or sáhkkulávdi) can traditionally be designed in a number of different ways. At its simplest, a sáhkku board has three parallel rows of short lines, and the pieces are placed on these lines. The lines are called sárgat (one sárggis) in Sámi. It is common to draw the short lines as vertically connected to each other, so that the board appears to consist of just one row of very long lines, but the game is still played as if these were three separate rows of short lines. Such boards often also have three horizontal lines intersecting the vertical lines in order to illustrate that the lines are still in practice divided into three parallel rows. Some boards feature only a central horizontal line crossing the connected vertical lines, but the game is still played as if there were three rows of short lines. A special type of sáhkku board is the so-called Návuotna board which has three rows of squares (ruvttat, lanjat) instead of lines. The central line/square of the middle row, sometimes referred to as "the Castle", is indicated by a sáhkku-symbol ("X"), sun symbol, or other ornament. 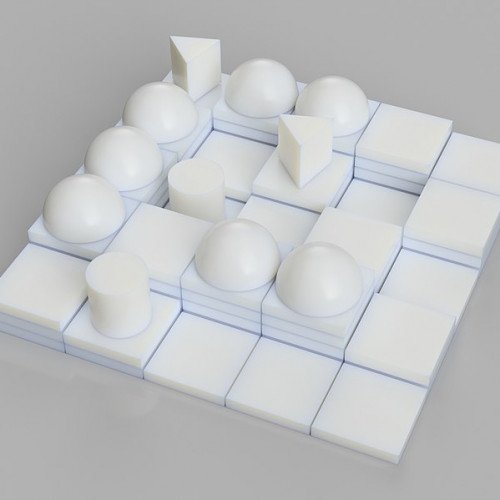 Santorini is an abstract strategy board game for 2-4 players designed and released in 2004 by Gordon Hamilton and republished via Kickstarter in 2016 by Roxley Games. Inspired by the architecture of cliffside villages on Santorini Island in Greece, and primarily designed for two players, the game is played on a grid where each turn players build a town by placing building pieces up to three levels high. To win the game, players must move one of their two characters to the third level of the town. Each turn of play involves moving one of your two pieces around a 5-by-5 grid each turn and then placing a tile adjacent to the moved piece, building up that spot of the board. On subsequent turns, pieces may be moved onto one of these built-up tiles, but only one level up at a time. Pieces may also be moved down any number of levels. Players may also place a special dome tile on top of a three-level building, which prevents a player from moving onto that spot for the remainder of the game. The primary winning condition is to get one of your pieces onto the third level, though players may also win if their opponent is unable to make a move. The Roxley Games version of Santorini introduced a god powers variant, which gives each player a unique way to break the rules. After being directly released and sold by Hamilton in 2004, Roxley Games ran a Kickstarter campaign during March-April 2016, drawing over 7,100 backers and raising over C$700,000, the most successful Kickstarter campaign ever based in Alberta. While the original release used plain white blocks as components, the Roxley version featured an enhanced cartoon-like look to the game, which Hamilton credits for success of the Kickstarter campaign. The game was released in retail outlets in January 2017.