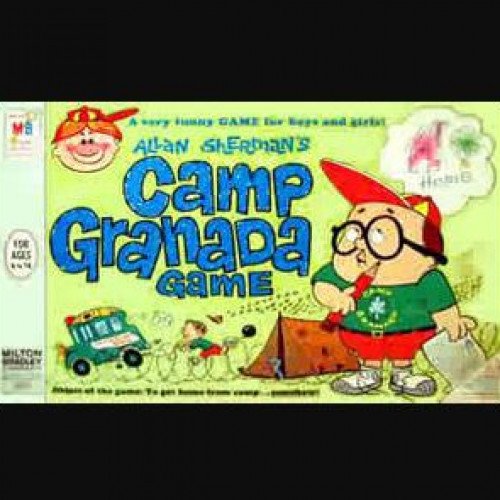 Camp Granada is a 1965 children's board game by Milton Bradley Company based on Allan Sherman's popular 1963 novelty song "Hello Muddah, Hello Fadduh (A Letter from Camp)". Campers take turns driving a breakdown-prone bus to gather ICKY animals from various summer camp locations to be the first to leave the real rotten camp for home. The game board depicts spikes on the diving board, an octopus in the swimming hole, and a lover's leap into a volcano. Camp Granada Bus cards have an image of a blue bus in disrepair and, on the reverse, a humorous reason to either drive the bus to a camp location and pick up an ICKY animal or to receive a SPECIAL PRIVILEGE and "take one ICKY animal from any player". After drawing a Camp Granada Bus card, the player then moves the toy bus along the road to the camp location specified by the card. The challenge is that the front axle of the bus can slide side-to-side and "the motor falls out right in the middle". In particular, if the front wheels move too far from the side of the bus, a small cam on the middle of the axle will contact one of two miniature lever arms connected to the bus's radiator, which is hinged and will be deflected to fall forward — the "breakdown" that ends a player's turn. For success, a player must carefully watch that neither front wheel moves too far beyond the corresponding bus fender. 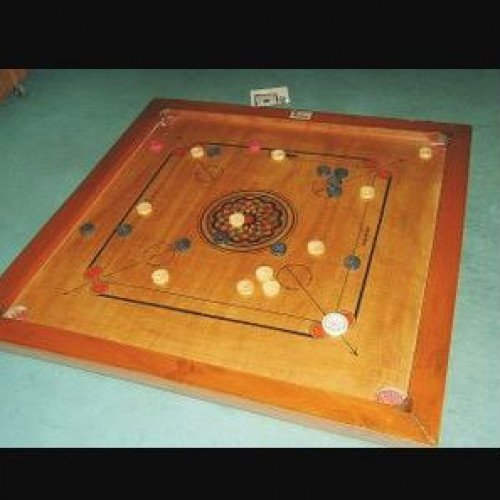 Carrom (also spelled carom/carroms) is a tabletop game of Indian origin. The game is very popular in South Asia, and is known by various names in different languages. In South Asia, many clubs and cafés hold regular tournaments. Carrom is very commonly played by families, including children, and at social functions. Carrom is not a patented game. It is in the public domain. Different standards and rules exist in different areas. It became very popular in United Kingdom and the Commonwealth realms during the early 20th century. The game of carrom originated in India. One carrom board with its surface made of glass is still available in one of the palaces in Patiala, India. It became very popular among the masses after World War I. State-level competitions were being held in the different states of India during the early part of the twentieth century. Serious carrom tournaments may have begun in Sri Lanka in 1935 but by 1958, both India and Sri Lanka had formed official federations of carrom clubs, sponsoring tournaments and awarding prizes. The International Carrom Federation (ICF) was formed in the year 1988 in Chennai, India. The formal rules for the Indian version of the game were published in 1988. In the same year the ICF officially codified the rules. The game has been very popular throughout South Asia, mainly in India, Pakistan, Bangladesh, Sri Lanka, Nepal and the Maldives. The game is also popular in many of the countries in the Arabian Peninsula, including Saudi Arabia, Kuwait and Bahrain. It has gained some popularity in United Kingdom, Europe, North America and Australia where it has been introduced by the Indian diaspora. The UKCF was formed in 1991 in London. The main work of this organisation is to promote the game of Carrom throughout the UK and ensure the participation of UK players in all major international championships. The UKCF have hosted 3 Euro cups in England and have had fantastic success in the tournament with UK players. UKCF organised national championships and league tournaments throughout the UK on annual basis.