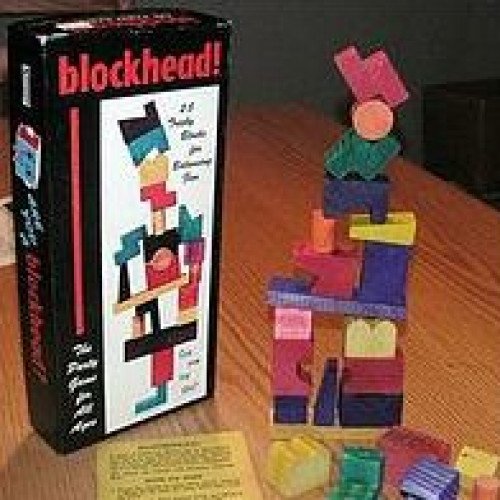 Blockhead! is a game invented in 1952 by G.W. "Jerry" D'Arcey and developed by G.W. and Alice D'Arcey in San Jose, California. Originally consisting of 20 brightly colored wooden blocks of varying shapes, the object of the game is to add blocks to a tower without having it collapse on your turn. The first player sets one of the blocks on a flat surface; this is the only block allowed to touch the base. Each player then takes turns adding a single block until the tower collapses. The player that knocks over the tower on their turn loses. A player who loses three times is eliminated. The last player remaining wins. Blockhead! uses slang terms with a block theme: A player who has lost once is called a "square"; a player who has lost twice is a "character"; a player who loses three times and is eliminated is a "blockhead". The game was first published by G.W. "Jerry" D'Arcey in 1952. In 1954 Saalfield Publishing Company released the first 25-block version of the game. The design of the blocks has remained consistent through each edition, the only change being modifying the yellow “double hump” to be more heart-shaped. Currently, the game is produced by Pressman Toy Corporation. 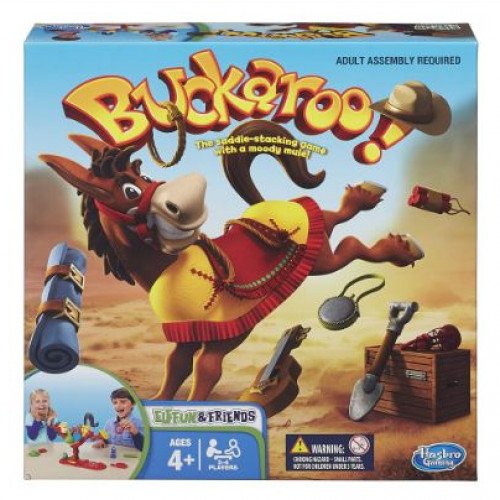 Buckaroo! is a game of physical skill, intended for players aged four and above. Buckaroo! is made by Milton Bradley, a division of the toy company Hasbro. The game centers on an articulated plastic model of a mule named "Roo" (or "Buckaroo"). The mule begins the game standing on all four feet, with a blanket on its back. Players take turns placing various items onto the mule's back without causing the mule to buck up on its front legs, throwing off all the accumulated items (the toy has a spring mechanism that is triggered by significant vibration). The player who triggered this buck is knocked out of the game, and play resumes. The winner is the last player remaining in the game. In the (unlikely) event that a player manages to place the last item onto the mule's back without it bucking, that player is the winner. The toy has three sensitivity levels that are adjustable via a switch located on the side of the mule's body, under the blanket. The switch adjusts the location of the lever to which the blanket is attached in relation to the trigger mechanism attached to the spring. In 2006 at America, Buckaroo! was considered dangerous, due to the objects getting flung off the mule when the spring is triggered. On Good Morning America and CTV News, it was mentioned that an object had hit a child in the eye in North Carolina, causing the 8-year-old boy to have surgery. The game was discontinued in America until 2008 when the instructions were adjusted.