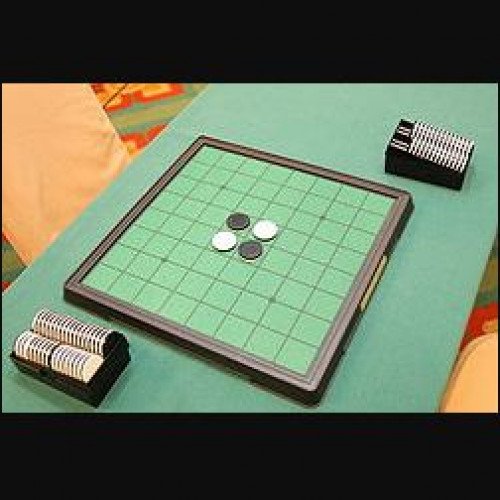 Reversi is a strategy board game for two players, played on an 8×8 uncheckered board. It was invented in 1883. Othello, a variant with a change to the board's initial setup, was patented in 1971. There are sixty-four identical game pieces called disks (often spelled "discs"), which are light on one side and dark on the other. Players take turns placing disks on the board with their assigned color facing up. During a play, any disks of the opponent's color that are in a straight line and bounded by the disk just placed and another disk of the current player's color are turned over to the current player's color. The objective of the game is to have the majority of disks turned to display one's color when the last playable empty square is filled. Goro Hasegawa claims that the origin of Reversi/Othello dates back 5,000 years. However, there is solid evidence that a game similar to Reversi/Othello existed since the 19th century. Each of the disks' two sides corresponds to one player; they are referred to here as light and dark after the sides of Othello pieces, but any counters with distinctive faces are suitable. The game may for example be played with a chessboard and Scrabble pieces, with one player letters and the other backs. The historical version of Reversi starts with an empty board, and the first two moves made by each player are in the four central squares of the board. The players place their disks alternately with their colors facing up and no captures are made. A player may choose to not play both pieces on the same diagonal, different from the standard Othello opening. It is also possible to play variants of Reversi and Othello where the second player's second move may or must flip one of the opposite-colored disks (as variants closest to the normal games). For the specific game of Othello, the game begins with four disks placed in a square in the middle of the grid, two facing white-side-up, two dark-side-up, so that the same-colored disks are on a diagonal. Convention has this such that the dark-side-up disks are to the north-east and south-west (from both players' perspectives), though this is only marginally consequential: where sequential openings' memorization is preferred, such players benefit from this. The dark player moves first. 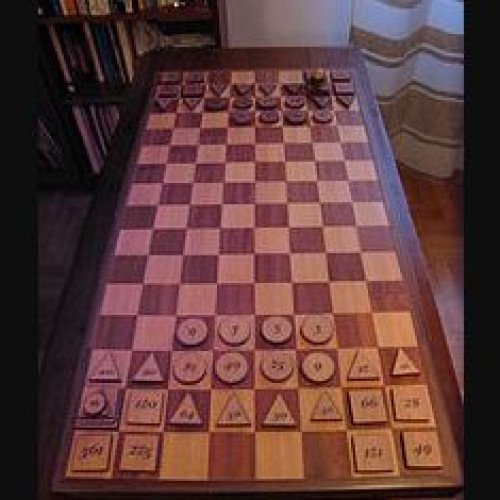 Rithmomachy (or Rithmomachia, also Arithmomachia, Rythmomachy, Rhythmomachy, or several other variants; sometimes known as The Philosophers' Game) is a highly complex, early European mathematical board game. The earliest known description of it dates from the eleventh century. A literal translation of the name is "The Battle of the Numbers". The game is much like chess, except most methods of capture depend on the numbers inscribed on each piece. It has been argued that between the twelfth and sixteenth centuries, "rithmomachia served as a practical exemplar for teaching the contemplative values of Boethian mathematical philosophy, which emphasized the natural harmony and perfection of number and proportion. The game, Moyer argues, was used both as a mnemonic drill for the study of Boethian number theory and, more importantly, as a vehicle for moral education, by reminding players of the mathematical harmony of creation." Very little, if anything, is known about the origin of the game. Medieval writers attributed it to Pythagoras, but no trace of it has been discovered in Greek literature, and the earliest mention of it is from the time of Hermannus Contractus (1013–1054). The name, which appears in a variety of forms, points to a Greek origin, the more so because Greek was little known at the time when the game first appeared in literature. Based upon the Greek theory of numbers, and having a Greek name, it is still speculated by some that the game originated in Greek civilization, perhaps in the later schools of Byzantium or Alexandria. The first written evidence of Rithmomachia dates to around 1030, when a monk named Asilo created a game that illustrated the number theory of Boëthius' De institutione arithmetica, for the students of monastery schools. The rules of the game were improved shortly thereafter by another monk, Hermannus Contractus from Reichenau, and in the school of Liège. In the following centuries, Rithmomachia spread quickly through schools and monasteries in the southern parts of Germany and France. It was used mainly as a teaching aid, but gradually intellectuals started to play it for pleasure. In the 13th century Rithmomachia came to England, where famous mathematician Thomas Bradwardine wrote a text about it. Even Roger Bacon recommended Rithmomachia to his students, while Sir Thomas More let the inhabitants of the fictitious Utopia play it for recreation. The game was well enough known as to justify printed treatises in Latin, French, Italian, and German, in the sixteenth century, and to have public advertisements of the sale of the board and pieces under the shadow of the old Sorbonne.