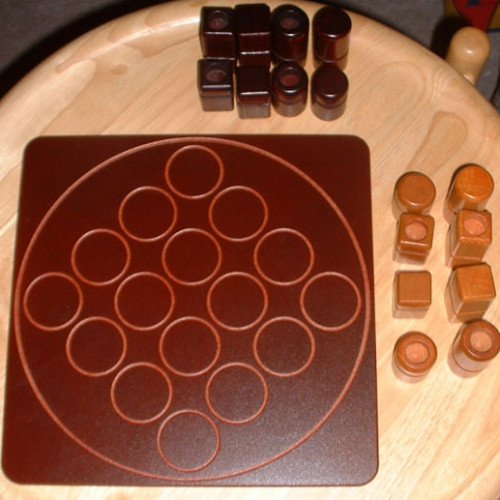 Quarto is a board game for two players invented by Swiss mathematician Blaise Müller. It is published and copyrighted by Gigamic. The game is played on a 4×4 board. There are 16 unique pieces to play with, each of which is either: tall or short; red or blue (or a different pair of colors, e.g. light- or dark-stained wood); square or circular; and hollow-top or solid-top. Players take turns choosing a piece which the other player must then place on the board. A player wins by placing a piece on the board which forms a horizontal, vertical, or diagonal row of four pieces, all of which have a common attribute (all short, all circular, etc.). A variant rule included in many editions gives a second way to win by placing four matching pieces in a 2×2 square. Quarto is distinctive in that there is only one set of common pieces, rather than a set for one player and a different set for the other. It is therefore an impartial game. 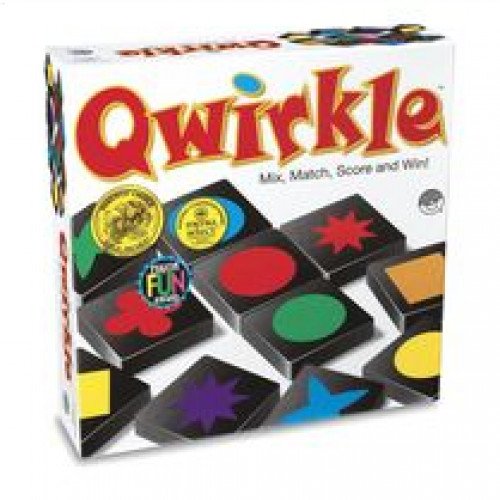 Qwirkle is a tile-based game for two to four players, designed by Susan McKinley Ross and published by MindWare. Qwirkle shares some characteristics with the games Rummikub and Scrabble. It is distributed in Canada by game and puzzle company Outset Media. Qwirkle is considered by MindWare to be its most awarded game of all time. In 2011, Qwirkle won the Spiel des Jahres, widely considered the most prestigious award in the board and card game industry. A sequel, Qwirkle Cubes, was released by Mindware in 2009. Qwirkle comes with 108 wooden tiles, and each tile is painted with one of six shapes (clover, four-point star, eight-point star, square, circle and diamond) in one of six colors (red, orange, yellow, green, blue and purple). The box also contains a bag to store the tiles and a rule book. Players score one point for each tile placed within a line, including existing tiles within the line. The idea is to form lines that have each shape of a certain color, or each color of a certain shape. For example: if there are three stars placed down on the grid (one green, one blue, and one purple), then the player can put down another star that is red, orange or yellow. If a line is completed (this is called a "qwirkle"), then an additional six points is added to the player's score. At the end of the game, once there are no more tiles to be drawn to replenish one's hand, the first person to play all of their tiles gains an extra six point bonus, at which point the game ends, and the player who has the highest score wins.