"TICKET TO RIDE" vs "TRIOPOLY" 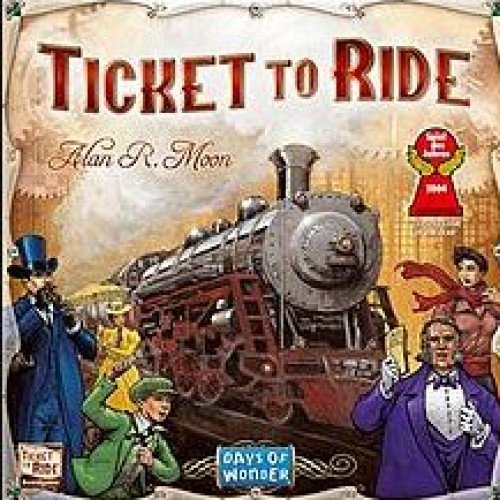 Ticket to Ride is a railway-themed German-style board game designed by Alan R. Moon. It was illustrated by Julien Delval and Cyrille Daujean and published in 2004 by Days of Wonder. The game is also known as Zug um Zug (German), Les Aventuriers du Rail (French), Aventureros al Tren (Spanish), Wsiąść do pociągu (Polish), and Menolippu (Finnish). The original version of the game is played on a board depicting a railway map of the United States and southern Canada. Localized editions have subsequently been published depicting maps of other countries, cities and regions. Players collect and play train car cards to claim train routes across the map. Points are earned based on the length of the claimed routes, whoever completes the longest continuous railway, and whether the player can connect distant cities that are determined by drawing ticket cards. The game won the 2004 Spiel des Jahres, the Origins Award for Best Board Game of 2004, the 2005 Diana Jones award, the 2005 As d'Or Jeu de l'année, and placed second in the Schweizer Spielepreis for Family Games. Ticket to Ride: Europe won the 2005 International Gamers Award. As of August 2008, over 750,000 copies of the game had been sold according to the publisher. As of October 2014, over three million copies were reported sold, with retail sales of over $150 million. 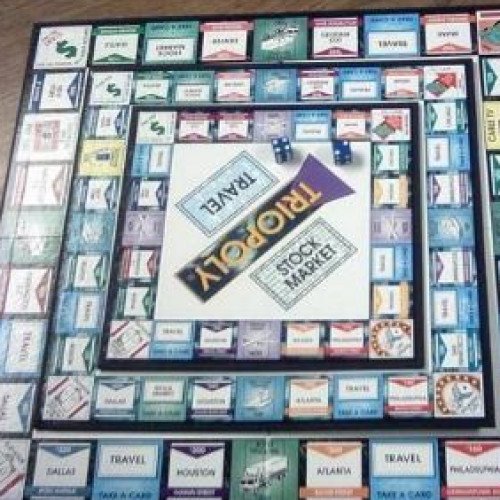 Triopoly is a board game by Reveal Entertainment. It plays in much the same way as Monopoly, except that it has three tracks of properties instead of one, and additional buildings which may be constructed on squares. The tracks of the board are arranged concentrically, the middle two being slightly raised to form a ziggurat. The game was invented in 1989 by Jeffrey Berndt, drawing inspiration from a five-hour game of Monopoly and the Tri-Dimensional Chess game he had seen an episode of Star Trek the following day. The game was co-designed and illustrated by Jeremy Parrish and Chris Hornbaker. The game was licensed to Reveal Entertainment, Inc., a company co-founded by Berndt, Maynard and Judy Gulley and Borden Duffel. The company raised funds to publish the game in 1997. The game won several awards and was named one of the "Best New Games" by Good Housekeeping and Games Magazine. The game can be played on one level, two levels or three levels, allowing players to decide the length of game they desire to play. Travel spaces allow players to move up and down levels with 'mini airline' tickets; or, an elevator that allows players to choose the level they desire to play. Players improve properties by building gas stations, shopping malls and skyscrapers.