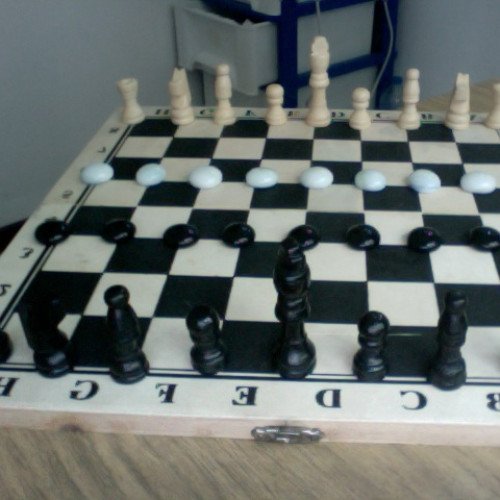 Ouk-Khmer (also known as Cambodian Chess) is a chess variant which D. B. Pritchard claimed was played in Cambodia although its actual origins appear to be unknown. Pritchard gives the source as P. A. Hill. It combines elements of makruk and xiangqi. Similar to xiangqi, it is played on the intersections of an 8×8 monotone board (instead of 8×9). Contrary to Pritchard's claim, the actual variety of chess played in Cambodia today, known as "Ok" or "Ouk Chatrang", is nearly identical to makruk. The authenticity of the game described by Pritchard remains doubtful. Pritchard (The Encyclopedia of Chess Variants, 1994) described this game as "an old variant displaying elements of Burmese Chess, Chaturanga and Makruk". However, the rules provided appear to be a hybrid of Makruk and Xiangqi. For example, play on the intersections and the movement of the fish (pawn) follow Xiangqi rules. The advanced placement of the full line of pawns resembles the initial setup of makruk. The naming of the "boat" also follows makruk. John Gollon, the author of "Chess Variations: Ancient, Regional, and Modern", received a description of a chess game in 1969 from a U.S. serviceman who claimed to have obtained the details from a Cambodian born guerrilla officer he was questioning. The serviceman expressed concern that he may have been mistaken about some of the details and Gollon stated that he was never able to confirm the details with an official Cambodian source. He admitted in his letter: “The correspondent later expressed some concern that he may have been mistaken in some details.” In 2007, the English chess specialist John Beasley published a revised edition of late D.B.Pritchard's book (The Classified Encyclopedia of Chess Variants), in which more details from Gollon's letter were given (such as the local names of the chessmen, not included in the 1st edition) and where Beasley expressed his strong doubt about the authenticity of this kind of chess. In reaction to this publication, Beasley was sent information that a set of this chess had made an apparition in an exhibition in Tokyo in 2002 as well as in several Japanese books that preceded or followed, written by Umebayashi Isao and Okano Shin. They could have rediscovered these rules by translating a book bought in Cambodia, where the Elephant could not capture sideways. The names they gave for the chessmen were somewhat different from Gollon (Kwon, Neamahn, Kwo, Seh, Tuuk, Trey as for the table). Umebayashi and Okano designated that game as "shattrong". A photo of a complete set was available showing the 18 pieces on a board with marked diagonals. Beasley published a corrective note in the British specialized magazine Variant Chess (Issue 55, September 2007 and issue 64, August 2010 ) to acknowledge this second “evidence”. He acknowledged that the game is apparently absent "from the streets of Phnom Penh in 2003" and stated that Peter suggested "that this may have been a minor consequence of the mass killings of the Pol Pot era.". The situation has been cleared out in 2012 with the help of a Japanese chess researcher, Yasuji Shimuzu who got in touch with Umebayashi Isao. First, it has been now understood that Umebayashi and Okano's books were simply presenting a reconstruction of the “Cambodian” chess which they had discovered in Pritchard's first edition. As Pritchard didn't name the chessmen in his first edition, the Japanese authors extrapolated the names with the help of a dictionary. No Cambodian books had been consulted and even found. The difference in Elephant's move was simply a misreading. Finally, looking for an illustration, they just set up a set of makruk with additional Fishes and Officials over a facsimile Burmese board that they had and fitted well the size of his chessmen. John Beasley published a corrective note on his website http://www.jsbeasley.co.uk/. His conclusion is that the game described to P. A. Hill in 1969 appeared once more to reduce to a single informant whose statements were at variance with all other known testimony. Moreover, John Beasley has found and proven that the game is flawed if played seriously. 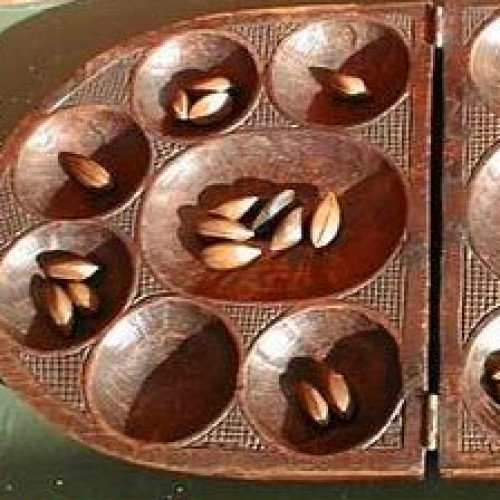 Oware is an abstract strategy game among the Mancala family of board games (pit and pebble games) played worldwide with slight variations as to the layout of the game, number of players and strategy of play. Its origin is uncertain but it is widely believed to be of Ashanti origin. Played in the Bono Region, Bono East Region, Ahafo Region, Central Region, Western Region, Eastern Region, Ashanti Region of Ghana and throughout the Caribbean, Oware and its variants have many names - Ayò, Ayoayo (Yoruba), Awalé (Ivory Coast, Benin), Wari (Mali), Ouri, Ouril or Uril (Cape Verde), Warri (Caribbean) Pallanguzhi (India) Wali (Dagbani), Adji (Ewe), Nchọ/Ókwè (Igbo), ise (Edo), Awale in (Ga) meaning Spoons in English according to the Ga name for the game. A common name in English is Awari but one of the earliest Western scholars to study the game, Robert Sutherland Rattray, used the name Wari. The game requires an oware board and 48 seeds. A typical oware board has two straight rows of six pits, called "houses", and optionally one large "score" house at either end. Each player controls the six houses on their side of the board, and the score house on their end. The game begins with four seeds in each of the twelve smaller houses. Boards may be elaborately carved or simple and functional; they may include a pedestal, or be hinged to fold lengthwise or crosswise and latch for portability and storage with the seeds inside. While most commonly located at either end, scoring houses may be placed elsewhere, and the rows need not be straight. When a board has a hinged cover like a diptych, the scoring houses may be carved into the two halves of the cover, and so be in front of the players during play. The ground may also be used as a board; players simply scoop two rows of pits out of the earth. In the Caribbean, the seeds are typically nickernuts, which are smooth and shiny. Beads and pebbles are also sometimes used. In the West, some cheaper sets use oval-shaped marbles. Some tourist sets use cowrie shells. The game starts with four seeds in each house. The objective of the game is to capture more seeds than one's opponent. Since the game has only 48 seeds, capturing 25 is sufficient to win the game. Since there is an even number of seeds, it is possible for the game to end in a draw, where each player has captured 24.