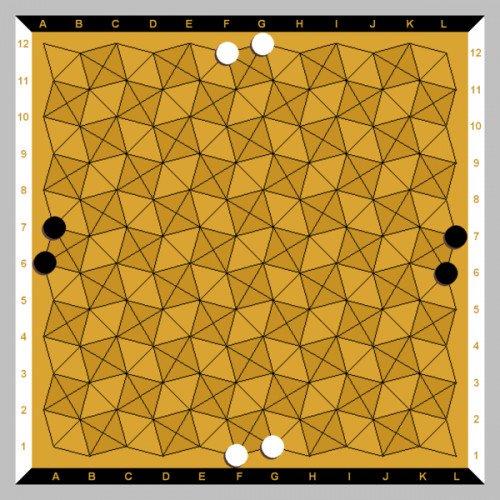 Onyx is a two-player abstract strategy board game invented by Larry Back in 1995. The game features a rule for performing captures, making Onyx unique among connection games. The Onyx board is a grid of interlocking squares and triangles, with pieces played on the points of intersection (as in Go). Each side of the board comprises twelve points. Black tries to connect the two horizontal (black) sides with an unbroken chain of black pieces, while White tries to connect the two vertical (white) sides with an unbroken chain of white pieces. The first to do so wins the game. Onyx was featured in several issues of Abstract Games magazine edited by Kerry Handscomb. The initial setup has four black pieces and four white pieces pre-placed (see illustration). Black moves first by placing a black piece on any empty point of the board. White follows suit. Turns continue to alternate. A piece can be placed on the midpoint of a square only if all four corners of that square are currently unoccupied. Once placed, pieces do not move. Captured pieces are immediately removed from the game. 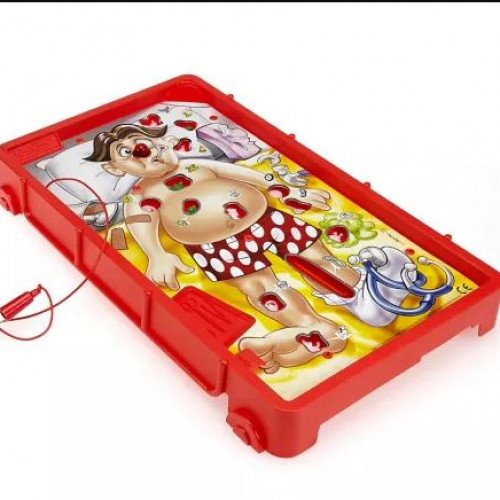 Operation is a battery-operated game of physical skill that tests players' hand-eye coordination and fine motor skills. The game's prototype was invented in 1964 by John Spinello, a University of Illinois industrial design student at the time, who sold his rights to the game to renowned toy designer Marvin Glass for a sum of US$500 and the promise of a job upon graduation (a promise that was not upheld). Initially produced by Milton Bradley in 1965, Operation is currently made by Hasbro, with an estimated franchise worth of US$40 million. The game is a variant on the old-fashioned electrified wire loop game popular at funfairs. It consists of an "operating table", lithographed with a comic likeness of a patient (nicknamed "Cavity Sam") with a large red lightbulb for his nose. This could be a reference to classic cartoons, where ill characters' noses turn red. In the surface are a number of openings, which reveal cavities filled with fictional and humorously named ailments made of plastic. The general gameplay requires players to remove these plastic ailments with a pair of tweezers without touching the edge of the cavity opening. Operation includes two sets of cards: The Specialist cards are dealt out evenly amongst the players at the beginning of the game. In the U.S and Australian version, players take turns picking Doctor cards, which offer a cash payment for removing each particular ailment, using a pair of tweezers (dubbed “Electro Probe” in earlier versions) connected with wire to the board. Successfully removing the ailment is rewarded according to the dollar amount shown on the card. However, if the tweezers touch the metal edge of the opening during the attempt (thereby closing a circuit), a buzzer sounds, Sam's nose lights up red, and the player loses the turn. The player holding the Specialist card for that piece then has a try, getting double the fee if he or she succeeds. Since there will be times when the player drawing a certain Doctor card also holds the matching Specialist card, that player can purposely botch the first attempt in order to attempt a second try for double value. The winner is the player who holds the most money after all the ailments are extracted. Subsequent later games removed the money and cards, and the winner of these editions is the player who removes the most ailments.