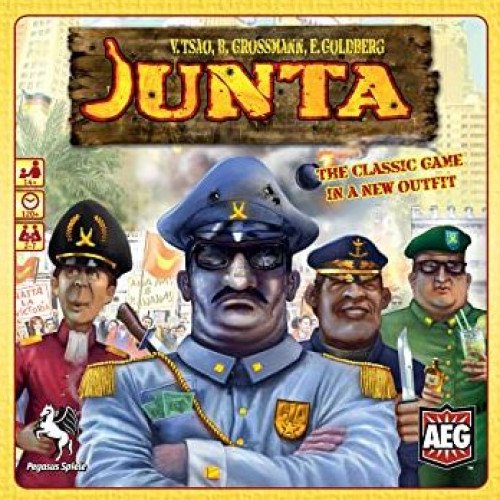 Junta is a board game designed by Merlin Southwell first published in 1978 by Creative Wargames Workshop and published, as of 1985, by West End Games. Players compete as the corrupt power elite families of a fictional parody of a stereotypical banana republic (specifically Republica de los Bananas) trying to get as much money as possible into their Swiss bank accounts before the foreign aid money runs out. Fighting in the republic's capital during recurrent coup attempts encompasses most of the game's equipment, rules and playtime. This game-within-the-game is however actually tangential to the players' main goal. The length of the game depends on how often coups are declared, but can often exceed six hours. The game's title is taken from the Spanish term "Junta" that originally referred to the executive bodies that frequently came to power after a military coup in 20th century Latin America (the Spanish version is called Golpe, which means coup d'état). In the game, the term refers to the players who declare "Rebel" at the beginning of the coup phase, and—if the coup is victorious—to the players who declare "pro-Junta" at the end of the coup phase to elect a new president. 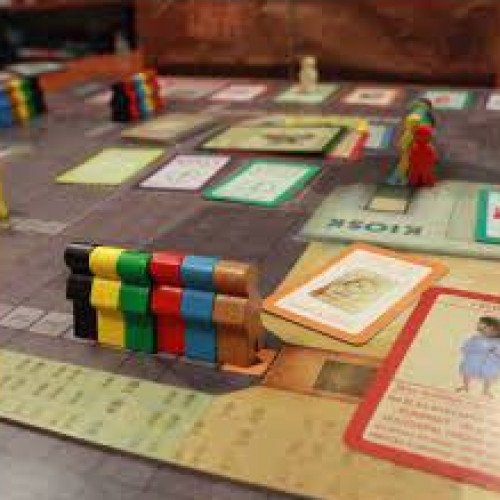 Kolejka (Polish for "queue" or "line (of people)") is a board game designed by Karol Madaj and launched in February 2011 by Poland's Institute of National Remembrance. It was designed to teach young generations about the hardships under communism (1945–1989), particularly the difficulty of acquiring consumer goods in the shortage economy. The game has been described as inspired by Monopoly. The game is played by two to five players, each controlling five pawns, representing their family members. Each family needs to do some shopping for events such as birthdays or holidays, however each player faces the problem of a shortage of needed goods. The stores are mostly empty, and there is no certainty as to what will be delivered or when and where it will be delivered. The players have to decide which store to queue in front of, and can play various event cards such as "This isn't your place", "Colleague in the government", or "Store closed", changing the order of the pawns in the queue (which represents jumping the queue, or forcing other players out of it). Goods can also be exchanged on the bazaar (black market). The first player to collect the required set of goods cards is the winner.