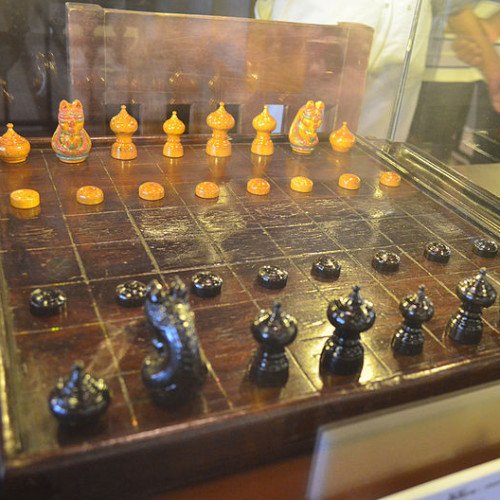 Makruk or Thai chess, is a board game that is descended from the 6th-century Indian game of chaturanga or a close relative thereof, and is therefore related to chess. It is classified as a chess variant. The word "ruk" (Thai: รุก) in Thai is thought to derive from "rukh" which means "chariot" in the Persian language (and is also the common origin of the name for a rook in western chess). The Persian traders came to the Ayutthaya kingdom around the 14th century to spread their culture and to trade with the Thai kingdom. It is therefore possible that the Siamese Makruk, in its present form, was directly derived from the Persian game of Shatranj via the cultural exchange between the two people in this period. This is because the movement of Makruk Thai's queen, or the "seed" (Thai: เม็ด), is essentially the same as the ferz in Shatranj. The disadvantaged player announces the counting of his fleeing moves, starting from the number of pieces left on the board, including both kings. The winning player has to checkmate his opponent's king before the maximum number is announced, otherwise the game is declared a draw. During this process, the count may restart if the counting player would like to stop and start counting again. For example, if White has two rooks and a knight against a lone black king, he has three moves to checkmate his opponent (the given value of 8 minus the total number of pieces, 5). If Black captures a white rook, the count does not automatically restart, unless Black is willing to do so, at his own disadvantage. However, many players do not understand this and restart the counting while fleeing with the king. 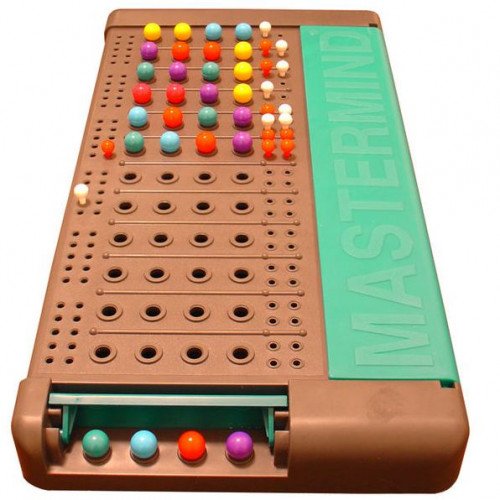 Mastermind or Master Mind is a code-breaking game for two players. The modern game with pegs was invented in 1970 by Mordecai Meirowitz, an Israeli postmaster and telecommunications expert.It resembles an earlier pencil and paper game called Bulls and Cows that may date back a century. The game is based on an older, paper based game called Bulls and Cows. A computer adaptation of it was run in the 1960s on Cambridge University’s Titan computer system, where it was called 'MOO'. This version was written by Frank King. There was also another version for the TSS/8 time sharing system, written by J.S. Felton and finally a version for the Multics system at MIT by Jerrold Grochow. The modern game with pegs was invented in 1970 by Mordecai Meirowitz, an Israeli postmaster and telecommunications expert. Meirowitz presented the idea to many major toy companies but, after showing it at the Nuremberg International Toy Fair, it was picked up by a plastics company, Invicta Plastics, based near Leicester, UK. Invicta purchased all the rights to the game and the founder, Edward Jones-Fenleigh, refined the game further. It was released in 1971–2. Since 1971, the rights to Mastermind have been held by Invicta Plastics. (Invicta always named the game Master Mind.) They originally manufactured it themselves, though they have since licensed its manufacture to Hasbro worldwide, with the exception of Pressman Toys and Orda Industries who have the manufacturing rights to the United States and Israel, respectively. Starting in 1973, the game box featured a photograph of a white man in a white jacket seated in the foreground, with a young Asian woman of high caste standing behind him with the golden symbols of office visible on her sari, denoting the power and intellect behind the throne. The two amateur models (Bill Woodward and Cecilia Fung) reunited in June 2003 to pose for another publicity photo.