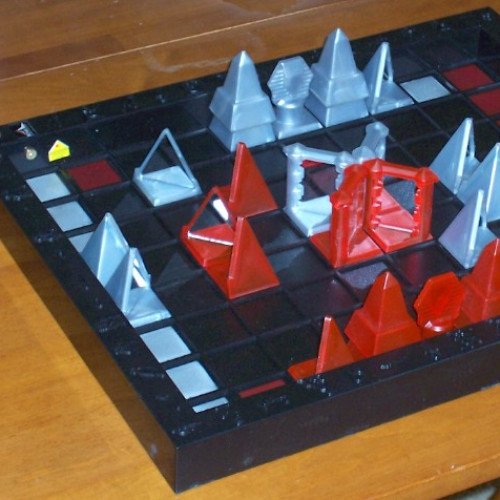 Khet is a chess-like abstract strategy board game using lasers that was formerly known as Deflexion. Players take turns moving Egyptian-themed pieces around the playing field, firing their low-powered laser diode after each move. Most of the pieces are mirrored on one or more sides, allowing the players to alter the path of the laser through the playing field. When a piece is struck by a laser on a non-mirrored side, it is eliminated from the game. Under its original name, the game was a Mensa Select Award winner. Its name was changed on September 15, 2006. The new game retains the same rules of gameplay, but has a different design, including a new color scheme and a new box design. Under the new name, the game was one of five finalists for the 2007 Toy of the Year award. Professor Michael Larson and two students, Del Segura and Luke Hooper, designed the game as a class project at Tulane University. (Professor Larson is now at the University of Colorado.) The game was introduced to the public in the spring of 2005, and was first brought to prominence at the New York Toy Fair of that year. The game was first shipped in October 2005. The first Deflexion World Championship was held December 10, 2005 under the dome at the Massachusetts Institute of Technology. Registration was free, and the participants competed for cash and other prizes. The winner was an MIT student. Under the new name, Khet, the first Regional Championship took place in April 2006 at the famous Café du Monde in the New Orleans French Quarter. Twenty-four participants competed for a number of prizes. As a special bonus, the Eye of Horus beam splitter was unveiled at the very end, and used by each player in the championship game. Khet was also featured on a recent episode of the HGTV show "I Want That: Tech Toys". Footage from the New Orleans tournament was included in the broadcast. In 2017 a company called "Thinkfun" acquired the license for the now out of print Khet 2.0 and rebranded the game "Laser Chess". Now with a new, modernized scifi look, it brings the exact same rules and feel of Khet 2.0 back to the table. 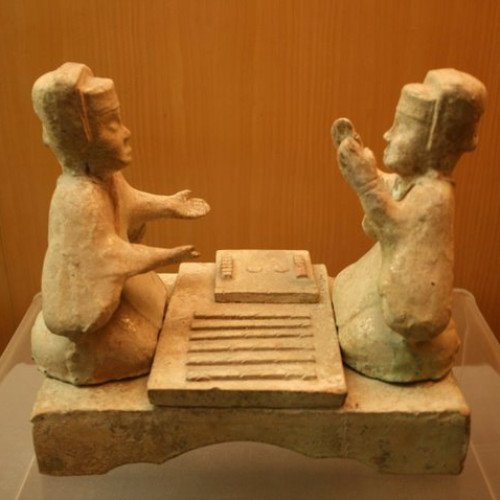 Liubo (Chinese: 六博 or 陸博; pinyin: liù bó; Wade–Giles: liu po; lit. 'six sticks') is an ancient Chinese board game played by two players. For the rules, it is believed that each player had six game pieces that were moved around the points of a square game board that had a distinctive, symmetrical pattern. Moves were determined by the throw of six sticks, which performed the same function as dice in other race games. The game was invented no later than the middle of the 1st millennium BCE, and was popular during the Han dynasty (202 BCE – 220 CE). However, after the Han Dynasty it rapidly declined in popularity, possibly due to the rise in popularity of the game of Go, and it became totally forgotten. Knowledge of the game has increased in recent years with archeological discoveries of Liubo game boards and game equipment in ancient tombs, as well as discoveries of Han dynasty picture stones and picture bricks depicting Liubo players. It is not known when the game of Liubo originated, although according to legend it was invented by Wu Cao (烏曹, called Wu Zhou 烏胄 in the early 2nd century CE Shuowen Jiezi dictionary), a minister to King Jie, the last king of the Xia dynasty, who according to traditional chronology reigned 1728–1675 BCE. While there is no archeological or reliable documentary evidence to support the view that Liubo dates back to the Shang dynasty (1600–1046 BCE), early Chinese records do indicate that Liubo was already a popular game by the Warring States period (476–221 BCE). For example, the Records of the Grand Historian records a speech made during the reign of King Xuan of Qi (reigned 319–301 BCE) that claims that the capital city of Linzi was so wealthy that its citizens were all able to indulge in activities such as playing musical instruments, cockfighting, dog racing, playing Liubo and playing kick ball.