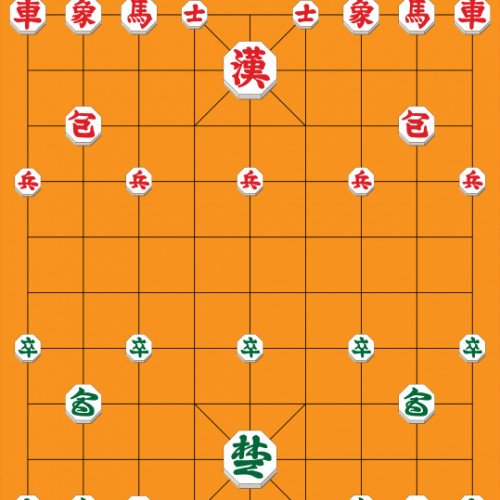 Janggi (including romanizations changgi and jangki), sometimes called Korean chess, is a strategy board game popular in Korea. The game was derived from xiangqi (Chinese chess) of China and is very similar to it, including the starting position of the pieces, and the 9×10 gameboard, but without the xiangqi "river" dividing the board horizontally in the middle. Janggi is played on a board nine lines wide by ten lines long. The game is sometimes fast paced due to the jumping cannons and the long-range elephants, but professional games most often last over 150 moves and so are typically slower than those of Western chess. In 2009, the first world janggi tournament was held in Harbin, Heilongjiang China. The board is composed of 90 intersections of 9 vertical files and 10 horizontal rows. The board has nearly the same layout as that used in xiangqi, except the janggi board has no "river" in the central row. The pieces consist of disks marked with identifying characters and are placed on the line intersections (as in xiangqi and Go in China). Janggi pieces are traditionally octagonal in shape, and differ in size according to their rank. The sides are Blue (or sometimes Green), which moves first, versus Red. Each side has a palace that is 3 lines by 3 lines (9 positions) in the centre of their side of the board against the back edge. The palace contains four diagonal lines extending outwards from the centre, forming an "X" shape. 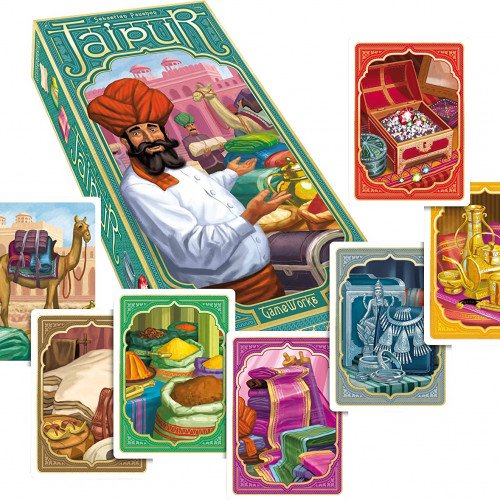 Jaipur is a card game for two players. It was created by Sébastien Pauchon in 2009 and published by Asmodee. Players assume the roles of powerful merchants in Jaipur, the capital of Rajasthan. The aim is to receive two "seals of excellence" and be invited to the court of the Maharaja. The game focuses on buying, exchanging, and selling at better prices, all while keeping an eye on both your camel herds. Overall, the board game has received favorable reviews, many acknowledging its simplicity, yet sufficient depth. Shut Up & Sit Down have suggested that "great game for seasoned vets but also something you could easily introduce to people who don’t play a lot" whereas iSlayTheDragon said "Jaipur is a blast to play". Board Game Land has suggested that the game was "one of the top card games for couples". Jaipur has continued to be a popular game with recommendations into 2020 as well as being part of the Mind Sports Olympiad 2020 competition.