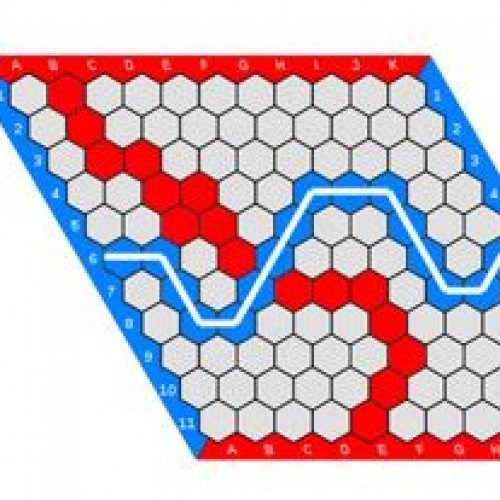 Hex is a two player abstract strategy board game in which players attempt to connect opposite sides of a hexagonal board. Hex was invented by mathematician and poet Piet Hein in 1942 and independently by John Nash in 1948. It is traditionally played on an 11×11 rhombus board, although 13×13 and 19×19 boards are also popular. Each player is assigned a pair of opposite sides of the board which they must try to connect by taking turns placing a stone of their color onto any empty space. Once placed, the stones are unable to be moved or removed. A player wins when they successfully connect their sides together through a chain of adjacent stones. Draws are impossible in Hex due to the topology of the game board. The game has deep strategy, sharp tactics and a profound mathematical underpinning related to the Brouwer fixed-point theorem. The game was first marketed as a board game in Denmark under the name Con-tac-tix, and Parker Brothers marketed a version of it in 1952 called Hex; they are no longer in production. Hex can also be played with paper and pencil on hexagonally ruled graph paper. Hex-related research is current in the areas of topology, graph and matroid theory, combinatorics, game theory and artificial intelligence. 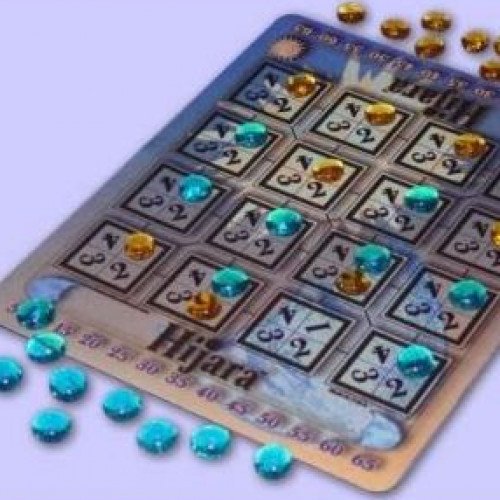 Hijara is a two-player abstract strategy board game played with small stones. It has been likened to a three-dimensional game on a two-dimensional board. The game was designed by Martin H. Samue| and first printed, as Excel, by American Airlines in their inflight magazine, American Way, on December 24, 1985 and July 22, 1986. It has been sold commercially as Eclipse in 1994, and Hijara (the Arabic word for small stones) in 1995, 2003 and 2006. The original commercial edition of Hijara has a game board of 16 squares, divided into 4 sections numbered 1 through 4 and a score-keeping "ladder" on either end. Players choose either yellow or blue and use 32 same-color stones plus one score-keeper each. Blue starts and players take turns placing their stones, one at a time, on any square, building on those already on the board, to complete and block point-scoring combinations. When a player places a stone on a square, it must be placed in the lowest-numbered open section in that square. So, for every square, the first small stone must be placed on the 1, second on the 2, etc. The game starts with an empty board, and ends with a full board with 3 ways to score points when placement of four same-color stones is completed in any of the following combinations: 10 points - 4 stones of the same color on 4 numbers of a kind in a row - horizontally, vertically, or diagonally. 15 points - 4 stones of the same color in numerical sequence (i.e. 1-2-3-4) - horizontally, vertically, or diagonally. 20 points - 4 stones of the same color in one square. Points are won with a player's own-color stones and are always accrued, never deducted. Several point-scoring combinations may be completed at one time with a single stone. Overlooked points are forfeited and, throughout the game, players keep score on their side of the board with an extra stone of their color. The game is over when the last small stone is placed and all the numbers are covered then, by comparing accrued points totals, the player with the greater number of points is the winner of the game.