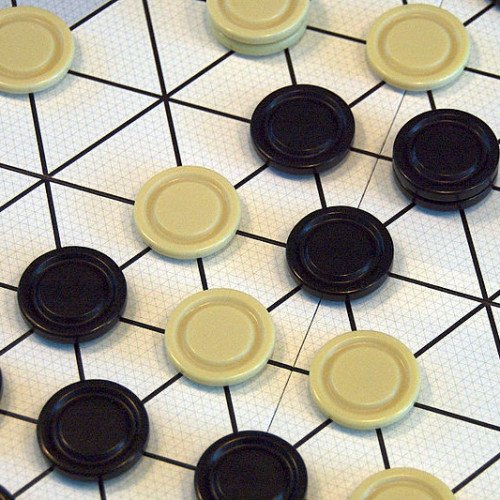 GIPF is an abstract strategy board game by Kris Burm, the first of six games in his series of games called the GIPF Project. GIPF was recommended by Spiel des Jahres in 1998. Players take turns pushing tokens (one player taking black, the other white) from the edge of the tri-gridded, hexagonal board, with pieces already in play pushed in front of the new placements rather than allowing more than one piece on any space. The game is lost if a player has no more tokens to play, and since each starts with a set number of tokens, it is clearly necessary to recycle pieces already positioned to keep playing. This is achieved by contriving to line up four pieces of the same colour in a row on the board, at which point those tokens are returned to their owner, and any opposing tokens extending from the line of four are captured. Because a single player will often move several pieces and change numerous on-board relationships, it is remarkably difficult to predict the state of the board more than one turn ahead, despite GIPF being a game of perfect information. Play tends to be highly fluid and there is no real concept of long term territorial or spatial development. The game can be expanded with extra pieces (available separately) called Potentials, which allow different kinds of moves to be made. These are named for the other games in the GIPF Project, though the other games are not actually necessary in order to utilise the Potentials named after them. 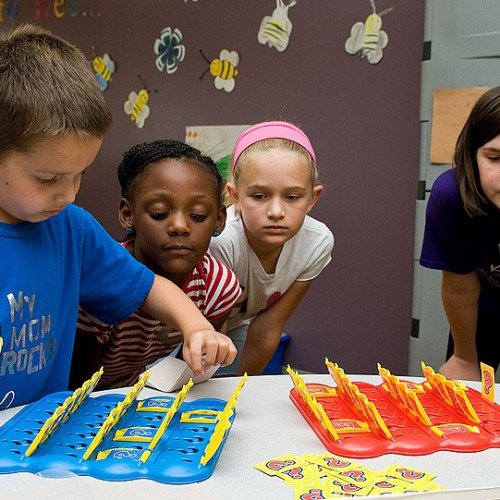 Guess Who? is a two-player character guessing game created by Ora and Theo Coster, also known as Theora Design, that was first manufactured by Milton Bradley in 1979 and is now owned by Hasbro. It was first brought to the UK by Jack Barr Sr. in 1982. The classic edition is currently being produced by Winning Moves Games USA. Each player starts the game with a board that includes cartoon images of 24 people and their first names with all the images standing up. Each player selects a card of their choice from a separate pile of cards containing the same 24 images. The objective of the game is to be the first to determine which card one's opponent has selected. Players alternate asking various yes or no questions to eliminate candidates, such as: "Does your person wear a hat?" "Does your person wear glasses?" "Is your person a man?" The player will then eliminate candidates (based on the opponent's response) by flipping those images down until only one is left. Well-crafted questions allow players to eliminate one or more possible cards. Special editions which have different faces have been released, including Star Wars, Marvel Comics and Disney. There are smaller, "travel" editions which have only 20 different faces. In 2008 and 2010, extra and mix and match games were released. A computer game based on the series was released in 1999 by Hasbro Interactive. In the United States, advertisements for the board game often showed the characters on the cards coming to life, and making witty comments to each other. This caused later editions of such ads to carry the spoken disclaimer line "game cards do not actually talk" in order to meet Federal Trade Commission advertising guidelines requiring full disclosure of toy features unable to be replicated with the actual product.