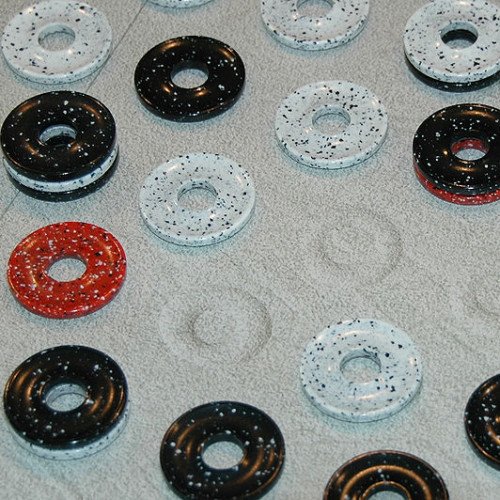 DVONN is a two-player strategy board game in which the objective is to accumulate pieces in stacks. It was released in 2001 by Kris Burm as the fourth game of the GIPF Project. DVONN won the 2002 International Gamers Award and the Games magazine Game of the Year Award in 2003. DVONN is played on a board with 49 spaces. The board has a hexagonal layout 5 hexes wide. One player has 23 black pieces to play, the other player has 23 white pieces. There are also 3 neutral red pieces, called DVONN pieces. The object of the game is to control more pieces than your opponent at the end of the game. The game starts with an empty board and proceeds in two phases. During the first phase, the players place their pieces on the board, starting with the three red DVONN pieces. Pieces can be placed on any unoccupied space. White starts, and the players alternate. So Black is the first to place a piece of his own color. The first phase ends when all pieces are placed on the board, filling it completely. The second phase involves the building of stacks of pieces (a single piece is also considered a stack) by moving stacks onto other stacks. A stack is controlled by a player if his color is on top. A stack is immobile if it is surrounded by 6 neighboring stacks. The white player has the first move in this phase. Any mobile stack of height n (with n > 0) can be moved (in a straight line) in any one of the 6 directions by exactly n spaces by the player controlling it, if it lands on another stack. Jumping over empty spaces is allowed, as long as the tower does not land on an empty space. Single DVONN pieces cannot be moved, but they can be once they are part of a stack. After each move, all stacks that are not connected via a chain of neighboring stacks to any stack containing a DVONN piece are removed from the board. 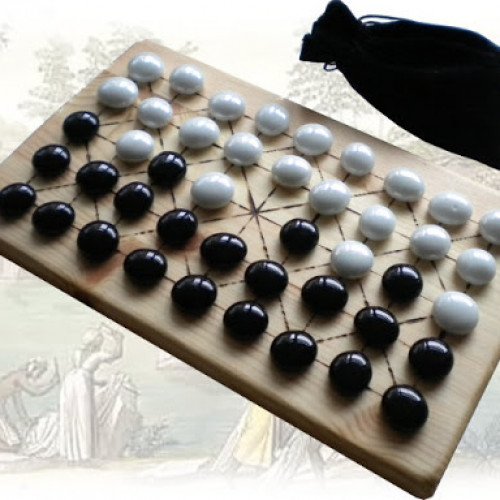 Fanorona (Malagasy pronunciation: [fə̥ˈnurnə̥]) is a strategy board game for two players. The game is indigenous to Madagascar. Fanorona has three standard versions: Fanoron-Telo, Fanoron-Dimy, and Fanoron-Tsivy. The difference between these variants is the size of board played on. Fanoron-Telo is played on a 3×3 board and the difficulty of this game can be compared to the game of tic-tac-toe. Fanoron-Dimy is played on a 5×5 board and Fanoron-Tsivy is played on a 9×5 board—Tsivy being the most popular. The Tsivy board consists of lines and intersections that create a grid with 5 rows and 9 columns subdivided diagonally to form part of the tetrakis square tiling of the plane. A line represents the path along which a stone can move during the game. There are weak and strong intersections. At a weak intersection it is only possible to move a stone horizontally and vertically, while on a strong intersection it is also possible to move a stone diagonally. A stone can only move from one intersection to an adjacent intersection. Black and white pieces, twenty-two each, are arranged on all points but the center. The objective of the game is to capture all the opponents pieces. The game is a draw if neither player succeeds in this. Fanorona is very popular in Madagascar. According to one version of a popular legend, an astrologer had advised King Ralambo to choose his successor by selecting a time when his sons were away from the capital to feign sickness and urge their return; his kingdom would be given to the first son who returned home to him. When the king's messenger reached Ralambo's elder son Prince Andriantompokondrindra, he was playing fanorona and trying to win a telo noho dimy (3 against 5) situation, one that is infamously difficult to resolve. As a result, his younger brother Prince Andrianjaka was the first to arrive and inherited the throne.