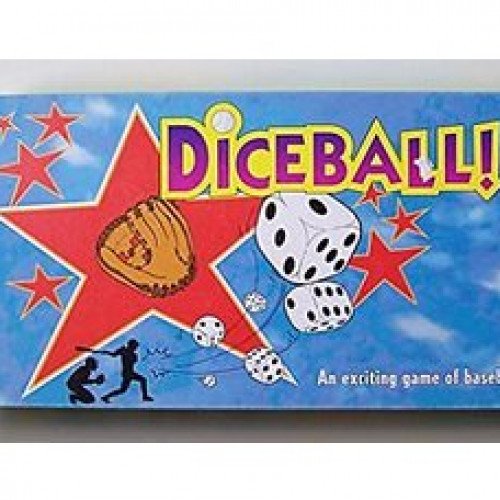 Diceball! is a board game in which two players roll dice to simulate a baseball game, one representing the visiting team and the other the home team. Both players use the dice to throw the baseball from the mound to the plate and field the ball on defense. Diceball! was designed to mirror the statistical reality of baseball. A regular game of Diceball! without extra innings lasts about 45 minutes. The game was designed in 1979 on a pizza box by a 16-year old Daniel Girard from Rawdon, Québec, while the Montreal Expos were chasing the pennant in the National League. Girard brought his game to his high school, where he organized tournaments with other students. Given the popularity of the game in his school, Girard also brought his game to university where it also became popular. The interest created by the game was noticed by entrepreneur Louis Desjardins, who launched the game with Girard. To start the game, the visiting team puts a pawn (as a batter and eventually runner) in the batter's box, to get the pitcher's throws. The die replaces the ball. The pitcher rolls the die until either the batter is struck out, the batter is walked, or the ball is hit. If the ball is hit, the offensive team rolls a die to determine the number of dice to be used to hit the ball. The number of dice indicated are rolled and added up. Numbers from 1 to 36 show the location where the ball is hit and the ball is placed on the game board. If the ball is hit on a circle, the ball was hit in the air and an out is recorded. If the ball is hit on a number in a cloud, it is a ground ball and that the batter will have to try to reach a base before the defense throws to that base. If the ball is hit to a star-shaped zone, the runner starts to run around the bases while the defence recovers the ball on the star. If the stars are from 27 to 36 it is a home run and all runners score. Every batter who runs around the bases and reaches home plate before three outs scores a run. As soon as three outs are recorded, stranded runners are removed from the bases. The teams trade places: the defense becomes the offense. 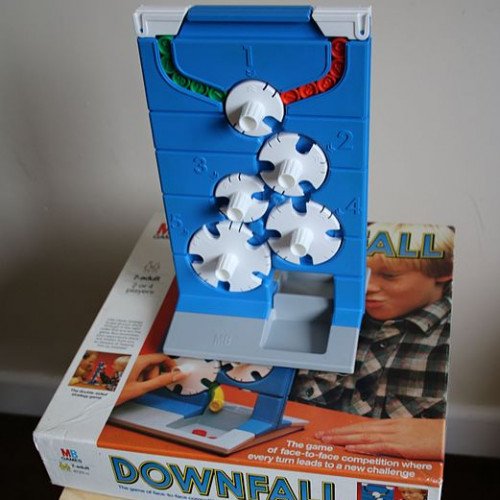 Downfall is a two-player game for players aged 7 and older, first marketed by the Milton Bradley Company in 1970. The game consists of a vertical board with five slotted dials on each side. Each player starts with ten numbered tokens or discs at the top of the board. The object of the game is to move the discs to the bottom of the board by turning the dials. Players alternate turns moving the dials and cannot move a dial that their opponent has just moved. The winner is the first player to move all of their discs into the tray at the bottom. An advanced version of the rules dictates that the discs arrive in the tray in numerical order. Since neither player can see the other's board, it is common to inadvertently advance - or hinder - the opponent's gameplay. The game rewards forward thinking and planning; players may try to "trap" their opponent into turning a dial that will advance their own disc, while trying to ensure that their own discs are not caught and dropped out of order. The game is currently available in the UK under the name New Downfall, manufactured and marketed by Hasbro. The new version follows the same rules but has a more futuristic design in red and yellow. The game's box art is parodied on the cover of Expert Knob Twiddlers, an album by Mike & Rich (Mike Paradinas & Richard D. James).