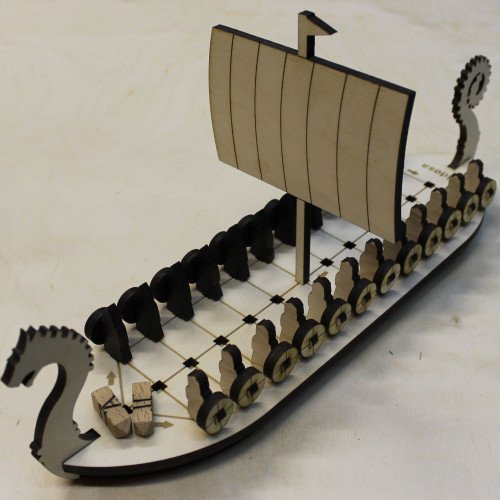 Daldøs is a running-fight board game only known from a few coastal locations in southern Scandinavia, where its history can be traced back to around 1800. The game is notable for its unusual four-sided dice (stick or long dice). In Denmark it is known as daldøs in Northern and Western Jutland (Mors, Thisted and Fanø), and possibly as daldos on Bornholm. In Norway it is known under the name of daldøsa from Jæren, where, unlike in Denmark, a continuous tradition of the daldøs game exists. Daldøs has much in common with some games in the sáhkku family of Sámi board games. Sáhkku is known to have been played among Sámi on the northern coast and eastern-central inland of Sápmi, far away from Jæren and Denmark. Otherwise, the closest relatives of this game appear to be the tâb games from Northern Africa and South-western Asia, possibly apart from one unlabelled diagram in a codex from Southern England. The board is boat-shaped and has three parallel rows of holes, two of which (A and B) have 16 holes each, while the middle row has an extra hole in the prow of the ship. Each player has 16 spatula-shaped pieces with a bottom end fitting into the holes of the board. One player has pieces that are rather wide and thin; whereas the other player's pieces are more obelisk-shaped. At the beginning of the game, player A's pieces are placed in the holes of row A so that the spatulas are perpendicular to the row (un-dalled), and equivalently for player B. Later in the game, the pieces will be turned (fordallede, or dalled) so that the spatula is parallel to the rows. Two special dice are used. Each die is a four-sided long die with pyramidal or rounded ends, preventing the die from standing on end. They may be about 2 by 2 cm in cross section, and 4 cm long. The four sides are marked A (with the value 1, called dallen, i.e. the dal), II (2, probably called døs), III (3) and IIII (4). According to some sources, the dal is opposite to III. 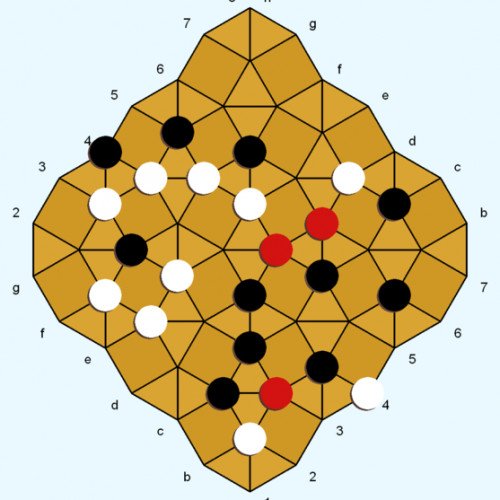 Diamond is a two-player abstract strategy board game invented by Larry Back. The invention was inspired by the game Kensington, which uses a similar board pattern and game objective. Rules for Diamond were conceived in 1985 and finalized in 1994. Diamond introduces a new board geometry and neutral pieces, with the aim of enhancing the game dynamic and lowering the potential for draws. Diamond was featured in the February 2013 issue of Games magazine. The Diamond gameboard consists of interlocking squares and triangles. White and Black each control 12 game pieces of their own color. Neutral pieces (red-colored in the diagrams) enter the game via captures. The pieces are played on the line intersections (called points, as in Go). White and black (but not red) pieces can move along straight lines to adjacent unoccupied points. A player wins by being the first to occupy all four corners (points) of a board square with their pieces. Capturing moves are possible in the Movement phase. If the points of a triangle contain exactly one white and one black piece, either player can capture the opponent piece by occupying the remaining open point ("cornering" the enemy piece on the triangle). The captured piece can be cornered on one triangle (see Example 1), or simultaneously cornered on two different triangles (Example 4). The captured piece is immediately removed from the game and replaced on its point by a neutral piece. If a move simultaneously corners two opponent pieces on two different triangles, then neither enemy piece is captured (Examples 2 and 3). A piece can move safely to a triangle point even if the other two points of the triangle are occupied by enemy pieces (Example 5).