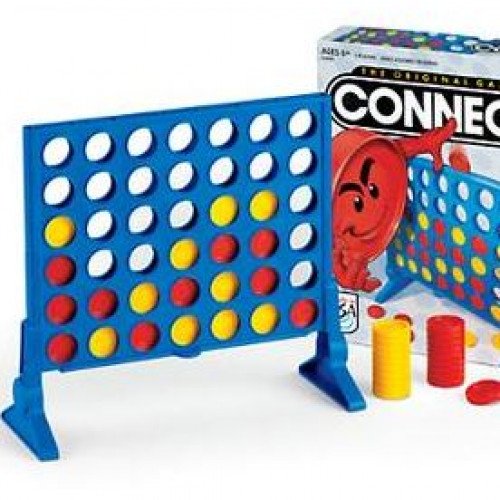 Connect Four (also known as Four Up, Plot Four, Find Four, Captain's Mistress, Four in a Row, Drop Four, and Gravitrips in the Soviet Union) is a two-player connection board game, in which the players choose a color and then take turns dropping colored discs into a seven-column, six-row vertically suspended grid. The pieces fall straight down, occupying the lowest available space within the column. The objective of the game is to be the first to form a horizontal, vertical, or diagonal line of four of one's own discs. Connect Four is a solved game. The first player can always win by playing the right moves. The game was first sold under the Connect Four trademark by Milton Bradley in February 1974. Connect Four is a two-player game with perfect information for both sides. This term describes games where one player at a time plays, players have all the information about moves that have taken place and all moves that can take place, for a given game state. Connect Four also belongs to the classification of an adversarial, zero-sum game, since a player's advantage is an opponent's disadvantage. One measure of complexity of the Connect Four game is the number of possible games board positions. For classic Connect Four played on 6 high, 7 wide grid, there are 4,531,985,219,092 positions for all game boards populated with 0 to 42 pieces. The game was first solved by James Dow Allen (October 1, 1988), and independently by Victor Allis (October 16, 1988). 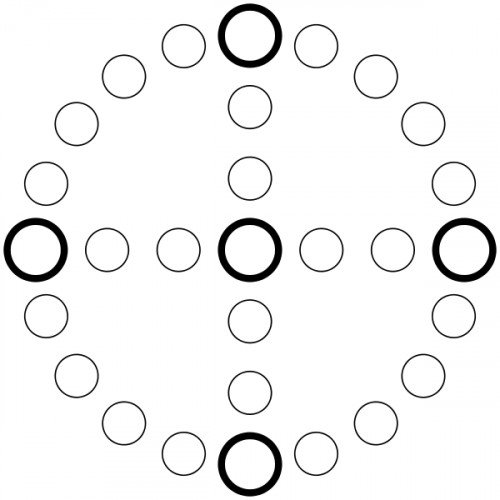 Cross and circle is a board game design used for race games played throughout the world. The basic design comprises a circle divided into four equal portions by a cross inscribed inside it like four spokes in a wheel; the classic example of this design is Yut. However, the term "cross and circle game" is also applied to boards that replace the circle with a square, and cruciform boards that collapse the circle onto the cross; all three types are topologically equivalent. Ludo and Parcheesi (both descendants of Pachisi) are examples of frequently played cruciform games. The category may also be expanded to include circular or square boards without a cross which are nevertheless quartered (Zohn Ahl), and boards that have more than four spokes (Aggravation, Trivial Pursuit). The game board for the Aztec game Patolli consists of a collapsed circle without an interior cross and thus has the distinction of being a cross that is a circle (topologically), without being a cross plus circle. Tokens are moved around spaces drawn on the circle and on the cross, with the goal of being the first player to move all tokens all the way around the board. Generally the circle of the cross and circle forms the primary circuit followed by the players' pieces. The function of the cross is more variable; for example, in Yut the cross forms shortcuts to the finish, whereas in Pachisi the four spokes are used as player-specific exits and entrances to the pieces' home. In non-race games (like Coppit and Trivial Pursuit) all paths may be undifferentiated in function.