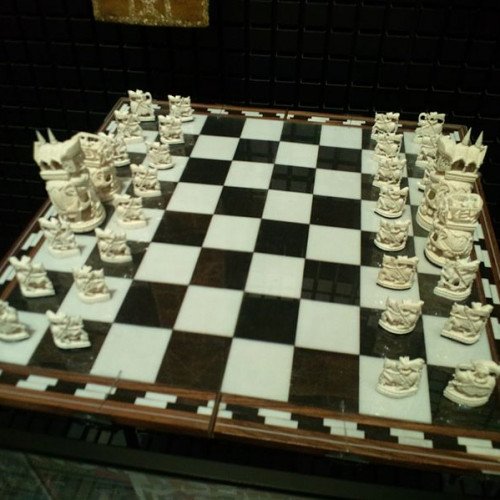 Chaturanga (Sanskrit: चतुरङ्ग; caturaṅga), or catur for short, which means 'Four Divisions' (referring to ancient army divisions of infantry Pawn (chess), cavalry Knight (chess), elephantry Alfil (chess), and chariotry Rook (chess)), is an ancient Indian strategy game that is commonly theorized to be the common ancestor of the board games chess, xiangqi, shogi, sittuyin, and makruk. Chaturanga is first known from the Gupta Empire in India around the 6th century AD. In the 7th century, it was adopted as chatrang (shatranj) in Sassanid Persia, which in turn was the form of chess brought to late-medieval Europe. According to Stewart Culin, chaturanga was first described in the Hindu text Bhavishya Purana. The exact rules of chaturanga are unknown. Chess historians suppose that the game had similar rules to those of its successor, shatranj. In particular, there is uncertainty as to the moves of the Gaja (elephant). The origin of chaturanga has been a puzzle for centuries. It has its origins in the Gupta Empire, with the earliest clear reference dating from the sixth century of the common era, and from north India. The first substantial argument that chaturanga is much older than this is the fact that the chariot is the most powerful piece on the board, although chariots appear to have been obsolete in warfare for at least five or six centuries. The counter-argument is that they remained prominent in literature. Several more recent scholars have proposed a gradual evolution in the centuries B.C. in the northern or northwestern border areas of Indian culture, where it was in contact with Greek culture brought by the Macedonian-Greek army, and where some rulers issued coins with fused Greek-Indian imagery. Myron Samsin argues that chaturanga originated in the kingdom of Bactria, ca. 255–55 B.C., in a fusion of the many short-moving men of the Greek game petteia, or poleis, with men derived from the various moves of an Indian race game, perhaps Seega or Chaupur, on the ashtapada, the board of another race game.

Draughts (/drɑːfts, dræfts/; British English) or checkers (American English) is a group of strategy board games for two players which involve diagonal moves of uniform game pieces and mandatory captures by jumping over opponent pieces. Draughts developed from alquerque. The name 'draughts' derives from the verb to draw or to move, wheras 'checkers' derives from the checkered board which the game is played on. The most popular forms are English draughts, also called American checkers, played on an 8×8 checkerboard; Russian draughts, also played on an 8×8, and international draughts, played on a 10×10 board. There are many other variants played on 8×8 boards. Canadian checkers and Singaporean/Malaysian checkers (also locally known as dum) are played on a 12×12 board. English draughts was weakly solved in 2007 by a team of Canadian computer scientists led by Jonathan Schaeffer. From the standard starting position, both players can guarantee a draw with perfect play. Draughts is played by two opponents, on opposite sides of the gameboard. One player has the dark pieces; the other has the light pieces. Players alternate turns. A player may not move an opponent's piece. A move consists of moving a piece diagonally to an adjacent unoccupied square. If the adjacent square contains an opponent's piece, and the square immediately beyond it is vacant, the piece may be captured (and removed from the game) by jumping over it. Only the dark squares of the checkered board are used. A piece may move only diagonally into an unoccupied square. When presented, capturing is mandatory in most official rules, although some rule variations make capturing optional. In almost all variants, the player without pieces remaining, or who cannot move due to being blocked, loses the game.