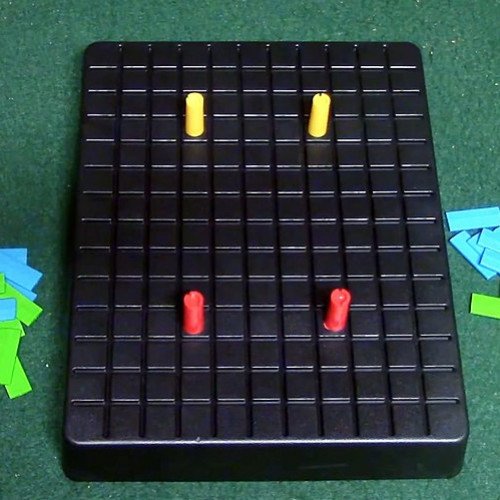 Blockade (also known as Cul-de-sac) is a strategy board game for two players with the motto "beat the barrier". It's played on a board with an 11x14 grid of spaces, barriers and 2 mobile playing pieces per player. The object of the game is to maneuver ones pieces around barriers and into the opponents starting spaces. The game is long out of production. Blockade was created by Philip Slater in 1975. In United States, it was published by Lakeside under the name Blockade. In France, Germany, Sweden, and United Kingdom the game was published by Lazy Days under the name Cul-de-sac (French, translation dead-end). The rules are simple, but it provides an interesting and deep game. Each player are given 2 pawns, 9 green walls (placed vertically), and 9 blue walls (placed horizontally). Pawns are placed on their starting locations on each of the four corners of the 11×14 board. First players' starting location is at [4,4] and [8,4], and the second players' is at [4,11] and [8,11]. The object of the game is for each player to get both their pawns to the starting locations of their opponent. The first to do so wins. On each turn, a player moves one pawn one or two spaces (horizontally, vertically, or any combination of the two) and places one wall anywhere on the board (useful for blocking off their opponent's move). Walls always cover two squares and must be placed according to their color (vertically or horizontally). Pawns may jump over other pawns that are blocking their path. Once players are out of walls, they keep moving pawns until one wins. 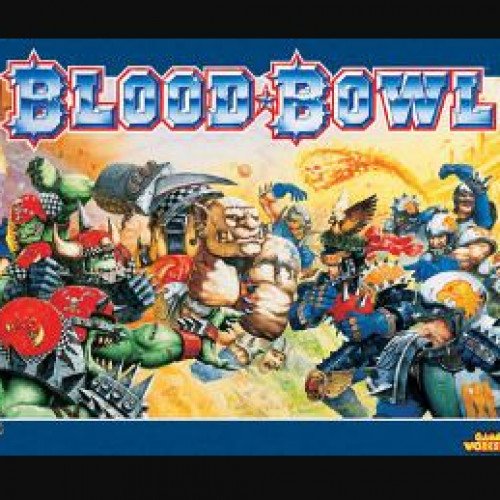 Blood Bowl is a fantasy football game created by Jervis Johnson for the British games company Games Workshop as a parody of American Football. The game was first released in 1986 and has been re-released in new editions since. Blood Bowl is set in an alternate version of the Warhammer Fantasy setting, populated by traditional fantasy elements such as human warriors, goblins, dwarves, elves, orcs and trolls. In late 2016, Games Workshop released a new version of the game - the first in 22 years. It featured a double sided board and new plastic miniatures. In August 2020, Games Workshop announced the latest version of the game, titled Blood Bowl Second Season Edition, which features a significant overhaul of the rules. This version was released in November 2020 and included miniatures for two teams and referees, a board (pitch), templates and the rule book. The rule book was also available separately, both physically and digitally. Cyanide Studio confirmed that the next videogame adaptation, Blood Bowl 3, would use the new ruleset. Blood Bowl is a two-player, turn-based board game that typically uses 28 mm miniatures to represent a contest between two teams on a playing field. A board containing a grid overlay represents the field. Using dice, cards, and counters, the players attempt to score higher than each other by entering the opponent's end zone with a player who possesses the ball. The "Blood" in Blood Bowl is represented by the violent actions available to players. Game play is based on a hybrid of American Football and Rugby. Players may attempt to injure or maim the opposition in order to make scoring easier by reducing the number of enemy players on the field.